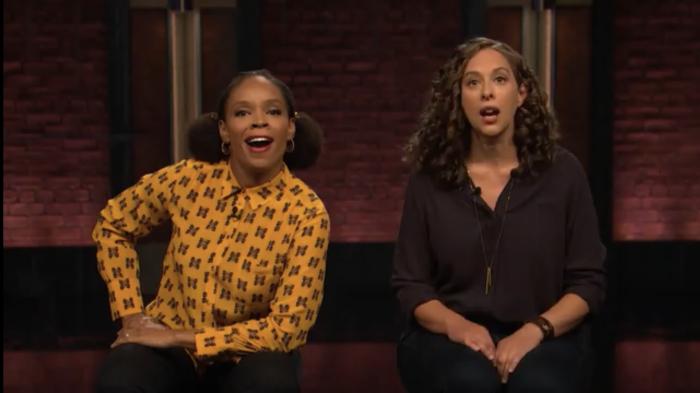 Here's the Only Olympics Recap You Need

Amber Ruffin’s time in Tokyo was a true highlight of the Olympics. While she was spreading love to athletes, skateboarding with Tony Hawk, and wanting to surf, Jenny Hagel was right by her side. The friends are both writers on Late Night with Seth Meyers and Jenny is the head writer for The Amber Ruffin Show. Now that they are both back stateside, they dropped by Seth’s show to discuss the Olympics. They offer a recap, but not of the Olympics as a whole. Instead, they focus on how well female athletes from the United States fared.

The U.S. Women’s medal count for this year’s Olympics is spectacular. Altogether, U.S. women won 66 medals! 66! The stories behind some of those wins are also incredible. For instance, Amber and Jenny take a moment to discuss Molly Seidel, a runner who won the Bronze Medal in the Women’s Marathon. The catch? It was only the third time she had ever run a marathon in her life! While the stories and achievements are marvelous, the real marvel is the chemistry between Hagel and Ruffin.

Amber Ruffin and Jenny Hagel have the kind of back and forth that makes you feel like you’re listening to old friends describe an event you were not present for. But, instead of feeling trapped in the corner, holding a red cup and trying to find an exit, you’re left hanging on every word they have to say.

The Olympics have ended. Usually, it would be like any other day. Instead, I find myself enthralled by human exceptionalism. Not just on the field, but also in 30 Rockefeller Center.