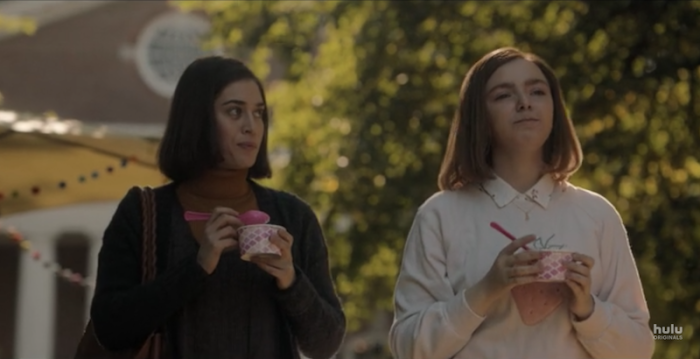 Oh, Castle Rock. You just never seem to stick the landing. This week’s season two finale proved that all the possessions and mass hypnotisms of that quaint Maine town were for naught, and in fact that whole storyline was wrapped up in the first 20 minutes. The rest of the episode dealt with arguably the stronger plot of the season as it followed Annie Wilkes out of town … and straight into the obsession we’ve been anticipating all along.

So how did it all go down? Well, the settler’s ceremony to resurrect Amity in the body of her vessel Joy was disrupted exactly as we expected. Annie went hilariously off the rails, Abdi and Nadia set off some explosives, and Pop managed to stave off his own possession thanks to the drug and returned in time for a last-minute assist. The Angel reappeared, for a moment, only to disappear again on the cliffs overlooking Castle Lake. Other than a quick info-dump that confirmed the connection between the Angel, the Schisma, and the lake itself (which is apparently a door to other times and dimensions), there is nothing new here. In the end the Marsten House, the crypt, and the statue are all blown to bits, freeing the residents from their hypnotism and ending the settler’s plot for world domination. The question, I suppose, is: did any of it even matter? If the show returns for a third season (and the showrunners have indicated that have a plan for one, should Hulu renew the series), at least the town still exists — though its residents have just experienced something Very, Very Wrong. It would be interesting to see whether these events have any ramifications, or if life in Castle Rock will return to normalcy (with a big helping of denial).

At the very least, we now know that The Kid/The Angel has been involved in the town’s weird happenings since the very beginning, and it’s a safe bet he’s got more plots afoot — and likely more guises under his belt.

It isn’t until Annie leaves town with Joy that we get a hint about another lingering mystery from season one: the whereabouts of Henry Deaver. Last we saw him, he was serving as The Kid’s new jailor — but since we now know The Kid is free once again, the question of what that means for Henry has been stuck in the back of my mind. The answer, such as it is, comes in the form of a MISSING PERSON poster hanging at a gas station Annie visits as she makes her way into Canada: 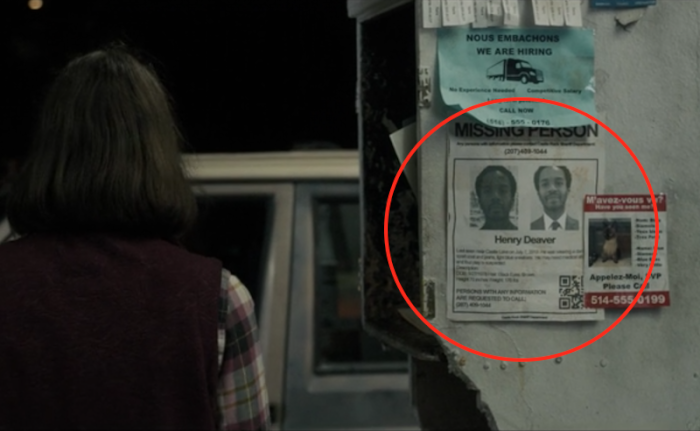 He’s… missing! That’s the answer! That’s it! Though maybe if the show returns, that’s another thread we’ll get more hints about.

Annie and Joy return to their wandering lifestyle, though Joy has been come uncharacteristically reserved as the pair put the trauma of Castle Rock in their rearview mirror. In an effort to engage with her silent daughter (sister), Annie picks up a book she finds in their motel and begins to read it aloud. Only… it’s not just any book. It’s “Misery’s Quest”, written by one Mr. Paul Sheldon. Yes, THAT Paul Sheldon — the man Annie will eventually hold captive. The back half of the finale digs up the roots of her obsession, as well as the events that turn Annie from an unreliable hero into the tragic villain she’s destined to become. Namely: the death of Joy by her own hands, just as her father predicted in one of her hallucinations earlier this season.

Annie takes Joy to Canada, where she settles into life as a live-in caregiver in a fancy house on a river. It seems like the perfect place for them to put their lives back together, but Annie becomes increasingly concerned with Joy’s change in attitude. Suddenly the girl is watching French language television, and lying about mysterious phone calls, and her notebook is filled with drawings of The Angel’s eyes. Annie — like the rest of us — begins to suspect that the vessel ceremony did actually happen, and that Joy has been possessed by Amity ever since. She slips some drugs into the girl’s ice cream (any excuse to grab ahold of an ice cream scoop, apparently), and when those fail to work she chases her daughter out onto the dock and into the water.

Yup, Annie winds up drowning Joy in the river, just like she’d intended to when she first took the child. It’s a neat way for the series bring Annie full circle, but it only works if she drowned Joy rather than Amity — and that’s the final twist of the knife (scoop?). Annie walks back inside in a daze, and notices a note sticking out of Joy’s notebook that’s addressed to her. The letter reveals that Joy was planning to run away and emancipate herself (those phone calls were to meet up with a lawyer), and that she needs some time to come to terms with everything she has learned and experienced thanks to their time in Castle Rock. What Annie’s paranoid mind took as signs of possession were just Joy’s all-too-relatable coping mechanisms.

Annie rushes out to try and save Joy, pulling her body from the water and performing CPR. We all know it’s too little, too late… which is why it’s such a surprise with Joy does come sputtering back to life, seemingly with no memory of her mother’s terrible actions. The pair hit the road again, visiting a quaint town where everyone seems to be laughing, and even Joy is back to her old cheerful, awkward self. Annie brought Joy to this town because Paul Sheldon is holding a book signing for his latest Misery Chastain novel, and the weirdness multiplies as Annie spots her mother and her father in the crowd. They’re dead, and the thing is — so is Joy. The blissful life Annie has experienced since she drowned her daughter has been the result of some kind of mental break, and there is no girl in the seat next to her.

Nevertheless, when “Joy” excitedly whispers that they ought to get Sheldon to dedicate a book to Annie, Annie responds as we all knew she would…

The season made for a neat prequel to the events of Stephen King’s “Misery,” and I loved the way it hinted at a larger narrative fabric for the series by bringing back Bill Skarsgård. Overall it was a stronger season — and a stronger finale — than season one, but it also still felt like something of a letdown. The slow takeover of the town seemingly went nowhere, and was resolved in the blink of an eye. Maybe that’s to be expected, as the show was juggling so much in trying to combine “Misery” and “‘Salem’s Lot”, but if the season was always going to be about Annie anyway then why pull so much focus with the other stuff? As for where the show goes from here, there was no coda to tease us the way season one offered the prospect of Jackie Torrance heading to the Overlook. Maybe that thread is still at play, though there is no shortage of characters and plots in the wider Stephen King universe for Castle Rock to pull from.

After all, there’s always “The Tommyknockers.”