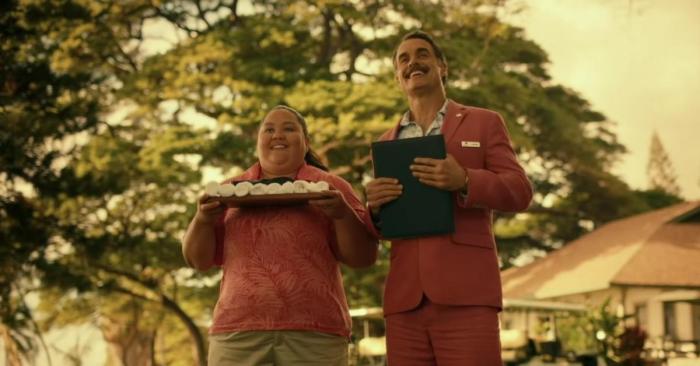 Confession: the sub-genre that can be summarized as “rich people suffer, oh, also someone dies” is utter catnip to me, especially if it’s an HBO drama. Big Little Lies? I absolutely inhaled it, including the unnecessary and flawed second season (though I’m eternally grateful for the line, “I will NOT not be rich!”). Succession? My world has been an aimless void since COVID knocked the production for season three out of wack but thank the Lord, my suffering will be over soon. So when the trailer for HBO’s The White Lotus dropped last month, my snarky little heart gave an excited quiver at the possibility of this being another excellent entry into this rather specific sub-genre. After last night’s premiere, this suspicion seems almost a surety now.

Created, written, and directed by Mike White (Enlightened), the limited series takes place over the course of a week at a Hawaiian resort and hotel where an assortment of monied people have descended upon for a tropical getaway that winds up going badly. Each VIP guest has their own set of proverbial baggage and although no details are provided just yet, we know it’s very likely one of these individuals is going to die. We also know that it’s not going to be human golden retriever Jake Lacy, whom we meet in the first minute of the show prior to the time jump that brings viewers to the beginning of that ill-fated week. We get to see a whole new side of Lacy here; largely known for playing the sweet-natured love interest, he leans heavily into jerk mode as Shane Patton, the sort of outwardly appearing “gee-whiz” WASP who’s one inconvenience away from letting his stapled mask of civility rot off his face. The boat shoe-wearing, Malcolm Gladwell-reading, commercial real estate agent is newly married to Rachel (Alexandra Daddario), a wide-eyed journalist who’s desperately trying to enjoy her honeymoon despite the creeping suspicion that her marriage may have been a mistake.

Then there’s the Mossbacher family with matriarch and high-powered exec Nicole (Connie Britton) leading the way. Her husband Mark (Steve Zahn) is understandably worried as he awaits word of a possible diagnosis from his doctor, though Nicole has no intention of allowing something as minor as a cancer scare put a dent in their family vacation. Their daughter Olivia (Sydney Sweeney), along with her best friend and fellow college sophomore, Paula (Brittany O’Grady), is the worst sort of spoiled rich girl, equipped with just enough education to wound anyone unfortunate enough to get in their path (the Mossbacher parents included). Sweeney and O’Grady are so good at weaponizing this sophisticated Mean Girl energy that I’m honestly a tad bit afraid of them. Rounding out the family unit is teenage son Quinn (Fred Hechinger) who’s mostly treated as either an afterthought or hindrance. It will be interesting to see how the Mossbachers figure into the proceedings, but mostly I’m just waiting to see when the cool and composed Nicole will let that pseudo-Zen façade fall away (we deserve to watch Britton go feral).

Jennifer Coolidge also stars as Tanya McQuoid, a lone traveler clearly in the midst of some sort of depression, a role which will almost assuredly go down as a standout performance in what is already an impressive and noteworthy filmography. It’s a far more nuanced and tempered role than usual, and although this will be the performance that will make “serious” Hollywood players take notice, anyone who’s paying attention has been aware of Coolidge’s brilliance ever since she purred “We both love soup” in 2000’s Best in Show. Tanya has come to the White Lotus in order to mourn her recently deceased mother. Her proclivity for self-care is apparent, and when she gloms onto spa employee Belinda (Natasha Rothwell), things promise to take a turn towards cringe (not overly so; one of the show’s biggest strengths is that it knows when to hold back). Although Tanya’s loneliness and inner pain garners a certain amount of sympathy, you’ll feel worse for Belinda who’s clearly just trying to do her job. There’s also an unspoken racial component here, with Belinda, a Black woman, being unwittingly placed in a caretaker position for a rich white woman. It’s unclear as to whether or not the series is going to fully call out this racial dynamic, but it’s an undeniable element in the relationship between these two characters.

Whether or not the show makes an effort to question the role of race and treatment within service jobs—it would be to its detriment not to—is yet to be seen, it does turn a hard eye towards the hospitality industry, especially with the hierarchy of clientele, management, and service people/laborers. Hotel manager Armond (Murray Bartlett) espouses service above all, though, in a stereotypical fashion, that belief tends to exist in an upward direction, as little of that care is extended towards the employees that enable such a huge operation to work in the first place. He does, however, momentarily recognize this tendency at times, one of the many instances that show that few, if any, of the characters are wholly terrible. For the most part, however, he flits about like a mustachioed scarecrow tasked with keeping the guests’ concerns at bay (“You have to treat these people like sensitive children”) from moment to moment. Armond’s not a great person, but he’s a damn funny one, and the comedic possibilities here are abundant. Working beside him is Lani (Jolene Purdy), the new trainee who’s having the worst first day at work since Ethan Hawke’s Jake Hoyt in Training Day. I only wish that more of the focus could be on the employees, especially the Native Hawaiians, as the colonialism that is woven into the massive tourism industry that exists there is impossible to ignore.

Though I’ve listed a ton of bad behavior here, the result is an altogether rousing good time for anyone who enjoys the occasional groan sprinkled in with their laughs. It’s Arrested Development meets Clue, with this assembly of already odd people on the verge of imploding into their babbling ids when the chaos breaks. If it was just a series about terrible people, The White Lotus wouldn’t be half as interesting as it is. But what elevates it among some of the more recent television offerings about awful people is that the series doesn’t treat its characters with disdain, opting instead to have the viewer determine their level of likability or lack thereof. The White Lotus guests’ cluelessness and out-of-touch ways are due in large part to their wealth, and when that money ends up not guaranteeing their happiness, they’re left with only fury and disbelief, often with hilarious (and not so hilarious) results. Add in the across-the-board fantastic performances and the perfect amount of cynicism combined with authentic feelings, and this series is sure to be weekly must-see tv. You probably don’t want to hang out with these people, but you’ll almost surely enjoy watching them struggle.

The first episode of The White Lotus is available on HBO and HBO Max. New episodes air Sunday nights at 9pm EST.

Kaleena Rivera is the TV Editor for Pajiba. When she isn’t wondering whether or not it’s safe for the sharks to feed them bread (an activity proposed by Armond to Mark), she can be found on Twitter here.

← Review: Olivia Colman And Colin Firth's 'Mothering Sunday' is Insufferably English | Has It Been Robot Loki All Along? →