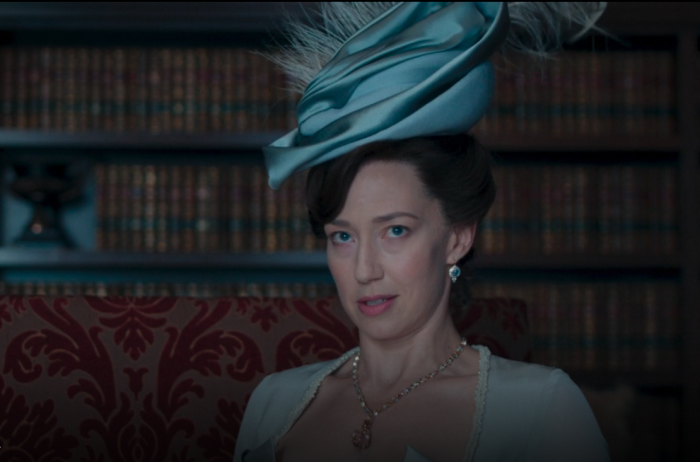 There are few names that are quite as synonymous with “period drama” as writer and showrunner Julian Fellowes. Best known for Downton Abbey—the British drama-turned-improbable stateside hit that managed the coveted “six seasons and a movie” status (with a sequel scheduled for theatrical release this May), a feat that’s especially impressive considering it landed on PBS—Fellowes’ subsequent work has continued in the same vein, with the 2020 series Belgravia on Epix (in the States). Now Fellowes has brought not just his work but his vision to the U.S., with his latest series, The Gilded Age, set in late 19th century New York City, where the Statue of Liberty awaits assembly and the value of a name is the only thing that outweighs money.

It is 1882, and Marian Brook (Louisa Jacobson) has just received bad news: her recently deceased father has, in his financial ineptitude, left her penniless. With only $30 to her name (a sad amount of money even then), Marian has no choice but to seek refuge with her estranged aunts in New York, rich widow Agnes Van Rhijn (Christine Baranski) and sister Ada (Cynthia Nixon) who, according to Agnes, has been granted “the pure and tranquil life of a spinster.” Agnes is also having a difficult time of it; not only must she now support an additional family member, but she must also cope with the Russells, a family with the unmitigated gall to encroach on her section of 5th Avenue with their new money and lack of pedigree. Patriarch George Russell (Morgan Spector) has made his millions as a railroad tycoon and has little care for the opinions of others, but his wife, Bertha (Carrie Coon), wants nothing more than for her family to be a fixture in New York society and is willing to do anything to make it happen.

In Fellowes’ fashion, there are several dozen more individuals that make up an (almost unwieldy) ensemble of people across either side of the class divide. Between the two households’ worth of servants with their mixture of loyalties and resentments, and the ladies of society who Bertha courts and begrudges in equal measure, the story should be livelier than it is, especially with a premiere clocking in at a hefty hour and twenty minutes. Despite the generous run time, almost every character feels shortchanged, more like avatars of their respective statuses rather than fully formed beings with tangible motivations. Stakes are only as high as a character makes them, and even the talented likes of Carrie Coon couldn’t make me feel enough for Bertha’s plight no matter how many times the script has her repeat variations of “things are changing fast” to justify her status-seeking.

For some time, the lack of diversity in Downton Abbey was a fairly common observation prior to season 4, when Fellowes finally granted a Black character a substantial storyline to … uh, mixed results. In The Gilded Age, Black characters are clearly intended to be more up front and center when Marian, after enduring a small calamity on her journey to New York, winds up making the acquaintance of aspiring writer Peggy Scott (Denée Benton). Peggy hails from Brooklyn and is in no rush to return, having had some sort of major falling out with her father (the details of which will almost surely dangle over our heads for at least another episode or two). With no discernable reason to stay in Manhattan, the series devises a way to make Peggy a fixture in the Van Rhijn household by having Agnes offer her a job doing secretarial work, a choice that makes Agnes come off as more inconsistent than progressive, seeing as how she shudders at the notion of bumping into her nouveau riche neighbor on the street. It’s through Peggy, as well as her mother, Dorothy (Broadway icon Audra McDonald), that the intersection of race and class meet. There’s enough awareness of the racial dynamics of the time to show how the Irish maid bristles at her presence (“…they’re coming up here now to take our jobs.”), but how much of it is thought out—a moment with the now-financially assured Marian being envious of Peggy for having a job rings a slightly sour note—remains to be seen.

Although the series has some problems, hardcore Julian Fellowes fans will probably be pleased. All of the Fellowes’ hallmarks are here: servants and laborers move in a flurry of activity as their moneyed employers survey their domain, all to the tune of swelling string instruments. But for other viewers, the lavish production—the costuming is unsurprisingly luscious, especially Carrie Coon’s wardrobe—may not be able to distract from the so-so writing and overly familiar story beats. Still, there’s a pleasant amount of melodrama to be had here, especially since it’s doled out by such strong performers (Cynthia Nixon gave me a fright for the first half of the episode with a performance that borders on insipid, but she thankfully manages to right herself). Even with its issues, the warm familiarity of scenarios such as potential young love and sharp-toothed social climbers should provide an entertaining distraction for those willing to be swept away by the glitz and glam of 19th century one-percenters.

Kaleena Rivera is the TV Editor for Pajiba. When she isn’t trying to figure out why Louisa Jacobson looks vaguely familiar (answer: she’s Meryl Streep’s daughter), she can be found on Twitter here.


← Maus Gets Banned in Tennessee. I Did Nazi That Coming. | 'The Mandalorian' Just Ate Whatever Lunch Boba Fett Had Left →