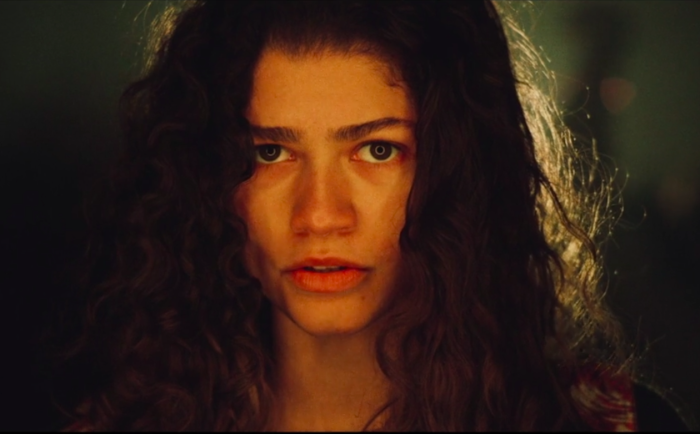 (spoilers for season one)

In season one of Euphoria, there’s a scene in which a college freshman football player, McKay (Algee Smith), is getting intimate with his girlfriend, Cassie (Sydney Sweeney), when out of nowhere, a group of frat boys raid the room and assault him. McKay’s thrown to the ground as a horrified Cassie screams. The young men, each of them masked, hoot and holler as they pin his naked body down on the ground and film him struggling in terror until they’ve had enough, triumphantly yelling the name of their fraternity as they finally leave the room. Once McKay, naked and still frozen on the floor, manages to gather the strength to stand, he locks himself in the bathroom and cries. They’re the most understandable tears in the world. Tears over feeling genuine terror at being attacked in the most vulnerable state possible, tears over being perceived as being weak in front of his girlfriend, tears over coming across as an easy target in a new environment where his previous reputation as a skilled athlete means nothing. Once he composes himself, he copes with the situation in the only way he can think of: he has fast, emotionless sex with a baffled Cassie.

It’s a difficult scene to watch, but it effectively identifies what the series sets out to do, namely, showcase young people trying desperately to use pleasure as a means of coping with trauma. Fearing for one’s life is a legitimate response to being attacked by a half dozen men (while he, a Black man, makes love to a white woman, no less), but when you’ve been raised by a father who consistently sacrificed your physical well-being in the name of excelling, as McKay has, one can see the flawed logic of using sex to affirm masculine strength. Unfortunately, it comes at the cost of Cassie’s dignity, feelings that she later makes a concerted effort to smother. It’s a pattern replicated throughout the entire show, a constant series of chain reactions set off by the pursuit of numbness under the guise of pleasure.

But what gives Euphoria more weight than what a simple cautionary tale could possibly lift—aside from its stylishness, which some critics deride as the “glamorization” of sex and substance abuse by teenagers—is the fact that it’s not solely pleasure-seeking that drives them; it’s also the yearning for identity, something that feels akin to agency (Kat, played by Barbara Ferreira, and her online sex persona immediately comes to mind) or as a substitute for other people’s affections (Cassie pursuing the love of a man, any man, in lieu of the love from her father).

The second season, which finally aired this past Sunday to quite some fanfare after its two-and-a-half-year hiatus, seems as though it will continue those themes, only this time with more consequences. The premiere takes place shortly after the finale, where Rue (Zendaya) finds herself brokenhearted and relapsing yet again and getting herself deeper into criminal mischief. On the subject of bad habits, Cassie finds herself unable to resist the urge to find happiness in all the wrong places, only to find herself in the worst place possible in a scene that is equal parts suspenseful and hilarious. Then there’s Jules (Hunter Schafer), newly returned after leaving Rue at the train station, who’s now dealing with the guilt of knowing Rue’s relapse was triggered by her actions (nevermind the fact that a 17-year-old shouldn’t be responsible for another person’s sobriety). The direst of these consequences are quite literally felt at the end of the episode, as a long-simmering situation comes to a head in a (quite honestly satisfying) act of violence.

One of the things we can be assured of this coming season is the continuing insight into the inner workings of these characters, with the premiere finally providing us the origin story of Fezco (Angus Cloud). The episode opens with a look back at his grandmother who, as it turns out, used to be an ass-kicking drug dealer before she suffered from the stroke that would leave her bedridden, which is what led to Fez taking on the trade and becoming the de facto guardian of Ashtray (Javon Walton). It’s a departure from previous flashbacks, most of which have some sort of family-based trauma at the center. While Fez’s backstory isn’t without trauma, it does serve as a reminder that the series has largely avoided any discussion on class, save for the presumed wealth of the Jacobs family, which easily ties in with the fact that Nate Jacobs (Jacob Elordi) is inarguably the series’ villain. For most other students of East Highland High School, however, their upper-middle-class status is largely glossed over, mainly deduced by details like the sizable homes in which the many indulgent parties take place. In contrast, Fez’s only connection to the rich teens is providing them with enough recreational drugs to keep his family out of poverty, but with what looks to be a growing relationship between him and Lexi (Maude Apatow), it appears likely that season two might give more attention to the separation between those that have the luxury of options in life and those that do not.

The adult content combined with the young ages of the characters has caused many to wonder who this series is aimed at. The show’s graphic nature means that the obvious answer is “adults,” though older teens will likely find the content absorbing as well. Euphoria has always been a highly dramatized vision of the struggle that can come with being a young person on the precipice of adulthood but without any of the tools that come with it. But the real draw here is the fact that said tools aren’t granted to adults upon reaching a certain age. There’s no birthday in which one is magically gifted a healthy sense of personal responsibility or the ability to advocate for oneself. Grown-ups don’t just wake up having come to terms with their sexuality, the ability to identify the toxic nature of a relationship, or any number of emotional and mental health issues that plague these teens. For plenty of adults, skills such as this can be slow in coming, and for some people, they never come at all. Maybe the most discomforting thing about the series isn’t that we’re watching teenagers make bad decisions, but that this self-destructive behavior and the motivations behind it aren’t restricted to the follies of youth.

Kaleena Rivera is the TV Editor for Pajiba. When she isn’t replaying that fight scene with a righteous look on her face, she can be found on Twitter here.


← The (Forever Postponed) Future of James Bond: Where Would You Like to See the Franchise Go? | Where Are the Missing 'Yellowjackets'? →