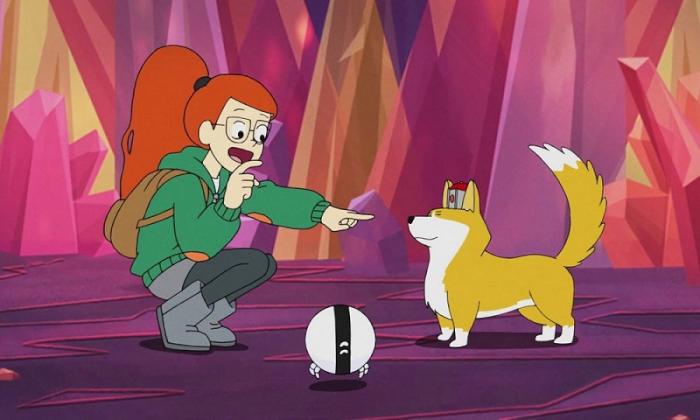 I have spoken lovingly about Infinity Train, the Cartoon Network-turned-HBO Max animated sci-fi/fantasy series, here before. If it reads as though it was written with a tinge of sadness, that’s because it was, as it seemed more and more likely that the series was bound for cancellation. After getting moved to HBO Max for its third season (with the first two originally airing on Cartoon Network), the show struggled to find its footing in a rapidly growing sea of tv and film content. Despite the ever-growing word of mouth, as well as vociferous online efforts to promote the show, including hashtags such as #SaveInfinityTrain, it seemed increasingly unlikely that this gorgeous, imaginative show was going to continue, especially when creator Owen Dennis himself stated in an io9 interview from last August that the show was at risk for non-renewal and nearly the entire crew had moved on to other projects. For fans of the show, it felt deeply unfair that, in a time where so many of us are clamoring for fresh and original content, a show that ticks pretty much every “quality entertainment” box could possibly fall by the wayside.

But then, out of the blue, a miracle happened last week:

Yes, this is real.

Your eyes are not deceiving you.

This is no longer a rumor.

There is a fourth season of #InfinityTrain coming to @hbomax in the near future. pic.twitter.com/FuVyAbdnNy

Animation Twitter lost its collective shit, to put it lightly. And just when the screams were about to come to a dull roar, HBO Max dropped this enigmatic teaser trailer consisting of a 2 minute and 12 second audio loop:

Fans are having a grand old time dissecting it for clues, with the general consensus being that the distorted audio is likely saying “I’m Billy, this is Ryan,” as well as noting that the video loops 8 times, which coincides with the number of seasons Dennis has previously stated he would like to make. Hmm. Unsurprisingly, we don’t have a release day yet for Book 4 (seasons are referred to as “books”), but when that day comes, be assured that there will be much rejoicing.

Until then, however, animation fans can keep busy when the second season of Close Enough, the surreal animated comedy which first premiered on HBO Max last summer, drops on February 25th. Close Enough follows a thirty-something Millennial couple as they raise their five-year old daughter while the onset of adulthood forces them to reconcile their evolving identities. It features the voice talents of creator J.G. Quintel, Gabrielle Walsh, Kimiko Glenn, Danielle Brooks, and Pajiba favorite Jason Mantzoukas, as well as a slew of guest stars, such as Judy Greer, “Weird Al” Yankovic, Rachel Dratch, Noel Fielding, and many more. Season one saw all sorts of uncanny takes on real-world scenarios ranging from volunteering at your kid’s school to going out to the club in your thirties (few pieces of dialogue have resonated with me quite like “Ugh, there’s nowhere to sit and my back is killing me!”). As the show was initially slated for TBS back in 2017 only to wind up being shelved for three years, I’m very glad HBO Max decided to pick this up, as it’s a deeply funny look at getting older. With a growing list of planned animated series in development, HBO Max is definitely investing more heavily into that particular line of programming. In the meanwhile, I hope they continue to provide support and resources to their already-existing offerings, especially since original programming of this quality is growing increasingly hard to find.

Close Enough season two premieres this Thursday, with season one available for streaming on HBO Max.

Infinity Train Books One through Three are also available for streaming on HBO Max.

Kaleena Rivera is a tv and film writer. When she’s not asking everyone she knows if they’ve watched Infinity Train yet, you can find her on Twitter

← It Was a Nice Planet We Had Once | Review: 'The Father' is a Brilliant Drama That Will Devastate You in Every Possible Way →