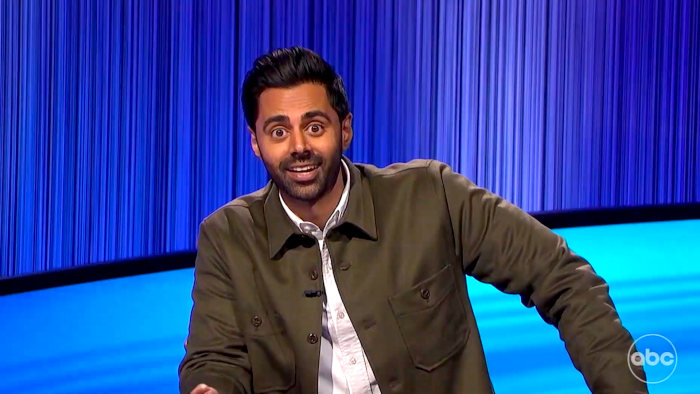 For the most part, we’ve been enjoying Celebrity Jeopardy’s prime-time run hosted by Mayim Bialik in my house. It’s high-energy, there are celebrities, and many of the questions are literally easy enough for our 10-year-olds to answer.

Spoilers: It has been fun to see Andy Richter run the table for three rounds and lose out to the charming Simu Liu; John Michael Higgins and Ike Barinholtz fared well even for non-celebrity contestants, as they dominated their episodes; Aisha Tyler, Reggie Watts, and Ego Nwodim were a joy, even in their losses; Iliza Shlesinger was genuinely smart and funny, and Wil Wheaton was exactly as good at Jeopardy as you think he might be.

There have been a few downsides. Constance Wu too often blamed her button and announced “I knew that!” after other people answered questions, and Jalen Rose, bless, was as bad at Celebrity Jeopardy as Snoop Dog was at Wheel of Fortune.

The difficult balance celebrities — and especially comedians — have to strike, however, is figuring out how much of their own personalities they should unleash in an otherwise structured show. Celebrity Jeopardy is an hour long (with Triple Jeopardy), which allows celebs more time to riff or crack the occasional joke, but it’s still Jeopardy. It doesn’t matter who the contestants are; most people tune in for the trivia, which is obviously the focus of the long-running game show. We want to see how smart (or not) the celebrities are, not how funny (or not) they are.

Enter Hasan Minhaj, who decidedly did not strike that balance. Minhaj, so good on Netflix’s Patriot Act and as a correspondent for years on The Daily Show, clearly does not understand how to use his Jeopardy voice. I really like Minhaj — less so after his episode — but he spent the entire episode mugging for the camera, interjecting inappropriately, and stealing focus away from the show itself. It was an unbearable hour to watch, and I can only imagine how much of Minhaj’s antics were probably cut out during the edit.

It was fun through much of the first round. Minhaj was clearly excited to be on the show, and his enthusiasm was infectious … to a point. By Double Jeopardy, however, the schtick had evolved from overly excited to braying. He wasn’t fanboying; he was trying to make the episode about himself. After each correct answer, he pumped his fist and stared down the camera as though he had just dunked on Shaquille O’Neal. Once or twice? Funny. Every time? Unbearable.

Thankfully, he didn’t get that many correct answers. And sometimes, when he did know the answer, he unapologetically answered when he shouldn’t have, shouting over Wheaton who had buzzed in first.

Still, I like Minhaj enough that I continued to root for him right up until he bet it all on a Daily Double and lost. At that point, it was clear enough that he was going to lose the game, and I think Minhaj knew it, too, which is why he doubled down on his obnoxiousness for the rest of the episode.

I didn’t see the episode until last night, and I’d heard that Minhaj was annoying ahead of it. I figured it was the Internet; people were overreacting. They were not. He was every bit as obnoxious as Twitter had warned, and maybe even worse. I’m still gonna watch Hasan Minhaj: The King’s Jester on Netflix because, despite what Jeopardy might otherwise suggest, Minhaj is normally both intelligent and funny, but he should lay off the cotton-candy before appearing on Jeopardy.


← What if 'Steamed Hams' Happened For Real, Underneath the Real Northern Lights | Double Your Swinton Pleasure In 'The Eternal Daughter' Trailer →
Header Image Source: ABC
Most Viewed