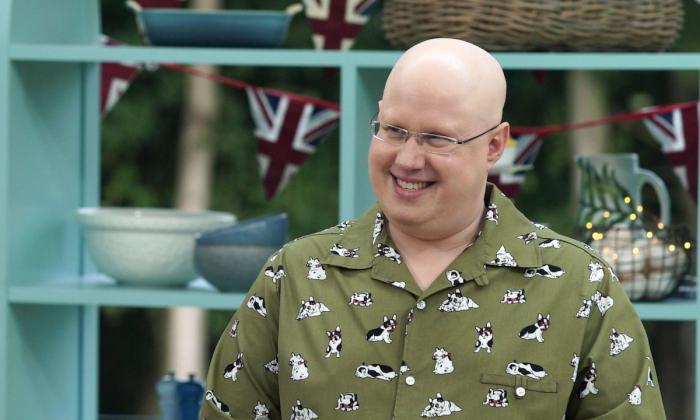 'Great British Bake Off' Co-Host Matt Lucas Is the Worst

Matt Lucas, like James Corden, feels like a cosmic prank that the Brits are playing on the United States. Like, they’re trying to pass these guys off as likable funny men and don’t think that dim Americans will notice. I don’t really understand where Matt Lucas came from (I mean, yes, Little Britain), or why he keeps showing up in things that I otherwise enjoy, like Doctor Who and now The Great British Bake-Off.

I am a relative newcomer to GBBO, having missed what I assume were the blissful Mel and Sue years with Mary Berry. As much as I still enjoy GBBO (go Crystelle!), Noel Fielding and, especially Matt Lucas, must be a huge step down from Mel and Sue. I got nothing against Noel — he was one of my all-time favorites on Taskmaster — but he sometimes feels somewhat out-of-place on GBBO, although I do appreciate his banter and enjoy his weirdness. Lucas, on the other hand, is worthless, and the cold opens this season have been brutal, culminating last week with Paul Goddamn Hollywood dressed as the Hulk. Matt Lucas is like a walking Dad joke, but not the good kind that you sort of laugh at while hiding your face behind your hands. He’s full-on cringe.

He also got himself in a spot of trouble last week when the theme was “free from,” as in ice cream free from dairy, sausage rolls free from meat, and cakes free from gluten. Lucas joked, referring to the beautifully decorated gluten-free cakes: “Like the two tears I shed for my gluten brothers who have been cast aside for the wants and vagaries of fashion.”

Social media wanted Matt Lucas to understand that being gluten-free is not a “fashion” choice, and that celiac disease (or Coeliac, if you’re Brit) is very real.

@BritishBakeOff Gluten free isn't the 'vagaries and fripperies fashion', Coeliacs have no choice and any gluten makes us seriously ill, it can lead to stomach cancer among other things. It's certainly not for fashion Matt Lucas.

There were a number of tweets like the above from folks who felt offended, so many that Matt Lucas took to Twitter to offer a sort-of apology.

Following on from 'Free From' Week on the Bake Off, I am happy to share this info… https://t.co/3ZDr5cOiLL

I have no real interest in wading into that discussion. This is merely a vehicle for expressing my disapproval for Matt Lucas, who is like the funhouse mirror version of the surly Matt Pinfield, the old MTV VJ who inspired The Killers’ song, “All These Things That I’ve Done,” or as we know it better, the “I got soul but I’m not a soldier,” song.