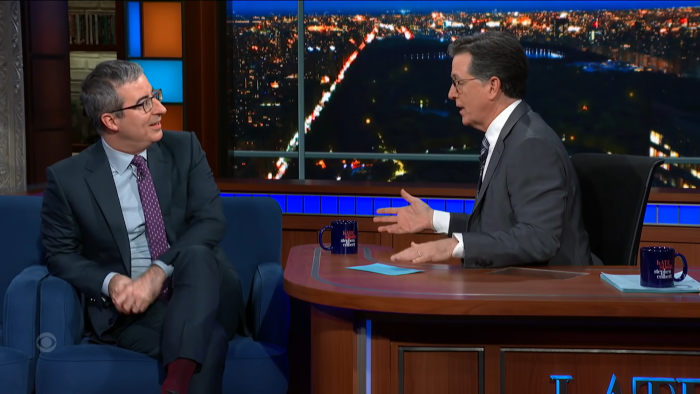 Give John Oliver And Stephen Colbert A Podcast Already

I’ve only seen one late-night show in person. That show was The Late Show with Stephen Colbert. I was already excited, then something wonderful happened. About halfway through the recording, Colbert revealed that they had to film an extra interview. It would be a part of a different show, but it was the only time they could fit it in. That interview was with one John Oliver. Y’all, I screamed. I’m not proud of it, but I absolutely did.

John Oliver has become one of my favorite voices in late-night. He had already won me over during a short stint replacing John Stewart behind the desk of The Daily Show. He’s funny, smart, charismatic, and doesn’t pull any punches. Since he shares those qualities with Stephen Colbert, it only makes sense that the two get along so well.

As Colbert says at the top of their latest sit-down, Oliver has been on Colbert’s show 14 times. Yes, they record their shows on the same island, but they also clearly love talking to each other. When they get a chance to speak to each other, it’s electric. There is friendship but also respect. Respect one would have for someone who makes them laugh effortlessly. These two crack each other up and therefore they crack the audience up. Everybody wins!

So, if people like Anthony Weiner and Curtis Sliwa can have a radio show together, why not get two hosts who people actually want to hear from? I don’t even need it to be about politics. They can sit down and talk about housing markets for all I care. Maybe they just go over favorite jokes. The possibilities are endless, and the product would speak for itself.