Jules Verne’s 1872 classic, Around the World in 80 Days, has been adapted for both television and movie screens a few times. The 1956 film version, starring David Niven as Phileas Fogg is probably the one most folks are familiar with. It won a pile of awards, including Best Picture. As much as I love Jackie Chan, it beats out his 2004 version with Steve Coogan in the title role hands down. 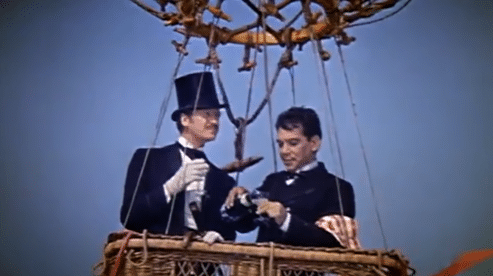 In 1989 Pierce Brosnan and Eric Idle starred in a TV mini-series that received three Emmy nominations and there are a couple of animated versions floating around out there somewhere.

However, in case you have somehow gotten this far in life without hearing any of this story, it is about London gentleman, Phileas Fogg, who makes a bet with the members of his club that he can circumnavigate the globe in 80 days or less. He and his valet, Jean Passepartout, must overcome the limitations of 19th century technology, the “mysteries” of foreign lands and peoples as well as their own blundering ways to beat the clock and win the wager. It’s Verne’s most popular story.

PBS Masterpiece dropped a trailer for their upcoming version last week staring David Tennant as Fogg. And it looks lovely.

David Tennant is coming back to MASTERPIECE in the brand-new adaptation of Jules Verne’s classic adventure novel, Around the World in 80 Days! Get ready to set sail in the hot air balloon with Phileas Fogg (played by Tennant), Passepartout and Fix… Coming soon! pic.twitter.com/GYDbYpINMk

David Tennant is never not going to be Doctor Who for me so I think this is a perfect fit. Because, obviously, The Doctor and Phileas Fogg would have gotten along famously. It would not surprise me at all if that hot air balloon basket was somehow bigger on the inside.

No release date as of yet but it would certainly make a delightful holiday watch with the family, wouldn’t it?

Besides Tennant, Around The World in 80 Days will also star French actor Ibrahim Koma as Passepartout, and introduce a new character, Abigail Fix, played by The Crown’s Leonie Benesch. (This is actually a gender-swap on the detective, Mr. Fix, from the original story.) It was adapted by a team of writers led by Ashley Pharoah and Caleb Ranson.