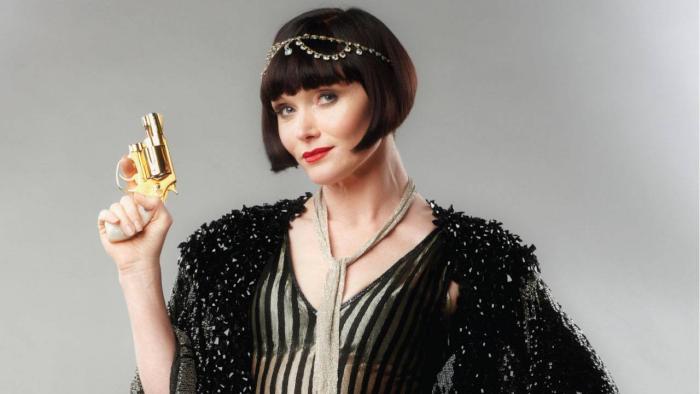 They say that you should always look on the bright side of life, a feat that’s never especially easy but one made all the more arduous when you’re self-isolating during a worldwide pandemic. It almost seems glib to try and find the light at the end of this seemingly endless tunnel, even as we find ourselves stuck in the middle of unprecedented and deeply surreal circumstances. As a full-time writer who works from home anyway, I expected to find self-isolation a lot easier than I have. It’s one thing to do it by choice, but a whole other basket of problems when it’s a nationwide necessity. Add to that the increased levels of anxiety we’re collectively feeling during this time and it’s no wonder that the bright side of life seems so foreign.

Like many people, I’ve been trying to keep myself occupied as much as possible during my splendid isolation. There are books to be read, flowers to embroider, and recipes to royally f**k up. Of course, there’s also a lot of TV to be watched. If ever there was a moment for the streaming market to wholly dominate the cultural conversation, it’s now. I like to set myself pop culture challenges, but I can’t say I’ve felt particularly motivated to achieve them at this moment in time, mostly because my typical viewing choices are bleak and veer more towards the emotionally hopeless than anything remotely uplifting. I like dark stories but not so much right now. I need something comforting that’s still in my typical wheelhouse of entertainment.

I am so very late to the Miss Fisher’s Murder Mysteries bandwagon. After almost every friend I have screamed giddily about it for years, I finally bit the bullet and sat down to watch the first season (my colleague Roxana reviewed the movie spin-off.) Obviously, I fell in love at first sight. What’s not to love about this utterly delicious murder mystery, fizzy as champagne and just as luxurious? It’s the perfect show to cuddle up on the couch and watch with a hot chocolate in one hand. Essie Davis is endlessly charismatic, draped in some of the most gorgeous costumes I’ve ever seen on a television series, and it’s forever a delight to see her solve crimes, live her best life, and be endlessly horny (seriously, Phryne Fisher’s sex drive is inspiring.) To say that Miss Fisher’s Murder Mysteries scratched as much-needed itch would be an understatement. Of course, it wasn’t alone in that endeavor.

Right around the time I jumped head-first into Phryne Fisher’s world, I also discovered Frankie Drake Mysteries. This CBS series is essentially the Canadian cousin to our beloved Australian crime fighter. The eponymous Frankie is another lady detective, this time in 1920s Toronto, and she also helps to solve murders to a flapper-heavy backdrop while dealing with sexist dudes and a few mega-sexy ones to boot (including a hot boxer and an unnervingly appealing Ernest Hemingway.) Both Frankie and Phryne are women oft-described as being ahead of their time and their detective work opens the doors for viewers to experience a particular brand of fantasy that’s proven particularly welcome during these times.

Cozy crime is nothing new in film, television, or literature. Agatha Christie helped to mold the formula while Jessica Fletcher perfected it for the visual media as a comfort tool. Just look at the recent success of Knives Out for proof that its appeal remains eternal. Go on Goodreads or Amazon and you’ll find an endless array of long-running crime series with sparky detective heroines who live in picturesque small towns, run adorable businesses frequented by quirky locals, only to have the fun occasionally spoiled by a gruesome death or two. You still want to live in these places and hang out with the population, even though these areas seem to have the world’s highest murder rate (this is me with Three Pines in the Armand Gamache books by Louise Penny, my most beloved crime series and a great salve during my moments of anxiety.) Many of these narratives are helmed by women, often older women, whose sleuthing, amateur or professional, pits them against societal norms. They’re dismissed, sneered at, laughed at, and often actively gaslit in their search for justice. Men see them as incapable of their position right up until they crack the case. Often, these heroines are supported by fellow misfits who provide a loving community for them.

Crime fiction and true crime remain consistent best-sellers, and it’s typically women who are putting their money down to buy all these books. It’s the perfect platform in terms of allowing us to explore our inner and oft-bottled down feelings of rage, anxiety, and indignation with the world. It’s not like living with daily fear of attack is new for us, sadly, and that’s an emotion made all the more troublesome for women of color, trans women, and women with physical and mental disabilities, all of whom are at far greater risk of violence. Crime stories can confirm those fears, subvert and challenge them, and provide a strange form of sanctuary.

There are obvious downsides to this given how pop culture is uniformly dominated with propaganda-level depictions of near-deified law enforcement individuals who are never compromised by systemic racism or rape-culture. Perhaps that’s why cozy crime is the domain of meddling women who operate outside of the conventional system. It makes their work seem far more altruistic by comparison.

I’m not sure of much these days. The ambiguity of this pandemic and the indefinite nature of our current self-isolating predicament has left a lot of room for worry. It doesn’t feel like a coincidence that the thing I want most is finality. For me, at this moment in time, I cannot help but appreciate the closure and comfort that a cozy murder mystery like the Phryne Fisher stories provides. They’re like romance novels in that their sense of satisfaction with the closing chapters are guaranteed. You know that love will win, you know that the bad guy will get caught, and you know that the joys of life will go on. Good wins. It doesn’t happen often. It’s its own strange kind of fantasy. It also seldom looks this fabulous.

← Clear Evidence of Why Thor Would Wipe the Floor with Every Other Superhero | Dream Casting 'Tiger King' Who Should Play Joe Exotic and Carole Baskin? →