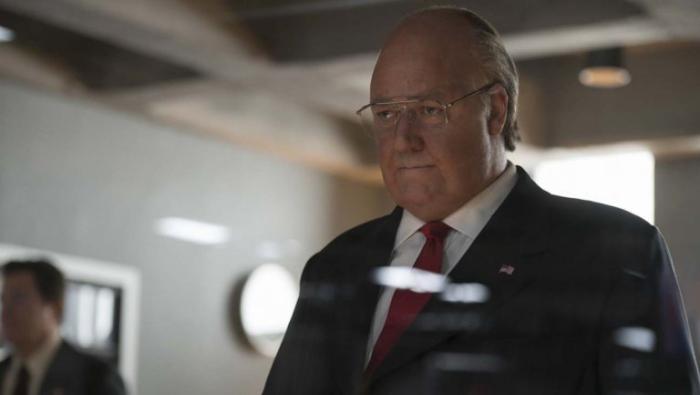 I don’t know how factually accurate Showtime’s Roger Ailes series The Loudest Voice is, but it comes from co-creator Tom McCarthy, who played a journalist on the final season of The Wire, so it must be spot-on. At the very least, it’s been consistent with what we already know about Roger Ailes and Fox News. (It’s also based on journalist Gabriel Sherman’s book The Loudest Voice in the Room and Sherman’s subsequent reporting, though I don’t know how many liberties have been taken).

Each episode tackles a particular time period in the Roger Ailes’ era of Fox News, and this week, The Loudest Voice covered 9/11 and the aftermath, and ooh boy. We mostly think about Fox News of the Trump era, but getting in bed with Republican Administrations really began way back with Karl Rove, Dick Cheney, and 9/11. That attack was tailor-made for Fox News, the first outlet to show people jumping from the towers on 9/11, because Roger Ailes thought that the people really needed to understand what we were dealing with, in part because he wanted to incite anger more than he cared about reporting the news. (This actually doesn’t appear to be true, as Fox News didn’t obtain footage of the jumpers until 2002).

And what were we dealing with? “Towelheads,” according to Roger Ailes, who seems prepared to push the war machine into gear even before the Bush Administration. Ailes is fueled by xenophobia, personal paranoia, and a desire to goose ratings for Fox News, which surpasses CNN in the months following 9/11 because Fox delivered news that their audience wanted to hear, regardless of its veracity (more accurately, Fox News surpassed CNN in December 2002). Ailes quickly begins pushing the narrative that Iraq was responsible for 9/11 because he wants to ensure that “my son doesn’t have to inherit some f**ked up towelhead terrorist world.”

“It’s our time,” Ailes tells Rupert Murdoch. He begins refusing Democratic experts, like James Clapper, and when Karl Rove calls and asks for his help, Ailes not only obliges but sends Rove talking points that find their way into a Dick Cheney speech (this is confirmed in a Bob Woodward book). At this point, there are still some legit news people offering pushback at Fox News, but Ailes dismisses them. “CNN is going to want to please and appease the rest of the world,” Ailes tells his newsroom. “We don’t give a f**k. Let them do that. Because we stand with America. We are going to tell people what they need to hear,” Ailes says.

That’s when Fox News officially decides to become a propaganda machine for the Bush Administration. When Executive Editor of Fox News, John Moody, pushes back, saying there is zero evidence of a link between Iraq and Al Qaeda, Ailes blows up. “We’re giving the people of America what they want … the current face of evil is [Saddam Hussein]. When we rub his face in the dirt, America wins, and when America wins, Fox News wins.”

That’s the philosophy that Fox News quickly takes on, and with Ailes at the head, it’s Fox News that does much of the messaging work for the Bush Administration, convincing a large swath of the nation that Iraq was somehow behind 9/11, facts be damned. But for Ailes, it wasn’t about oil or defense contractors. It was about ratings. It wasn’t about selling the truth. It was about selling the American people what they wanted, which was someone they could blame for 9/11. Ailes and the Bush Administration worked in tandem to exploit not just our fears in post 9/11 America, but our need for revenge, regardless of the target.

Meanwhile, the series also continues to focus on Laurie Luhn’s (Annabelle Wallis) allegations of sexual assault by Roger Ailes. It began, according to Luhn’s allegations, in a hotel room where she was compelled to perform oral sex on Ailes in exchange for a promotion, as depicted in The Loudest Voice. It’s going to get far more uncomfortable in the episodes to come, however, as Luhn alleged in a lawsuit that Ailes eventually settled for over $3 million that the Fox News CEO treated her as a sex slave over the course of a number of years.

— The episode opens before 9/11 with Ailes essentially hand-waving away sexual harassment allegations against Bill O’Reilly. “Look, I know O’Reilly is a pain in the ass, but he gets good numbers. Just take care of it,” he tells the head of HR, who apparently settled with a junior executive for $150,000 (this obviously fits a pattern of settlements on behalf of O’Reilly).

— The episode also takes up the burgeoning feud between Ailes and Rupert Murdoch’s son, Lachlan Murdoch, who eventually is instrumental in pushing Ailes out, but not before Lachlan Murdoch left in 2006 over Ailes’ programming decision.

— Ailes was so personally paranoid about terrorist threats that he bought a house across from West Point and installed a bunker beneath it (confirmed here and here).

— John Moody may be depicted as a reasonable guy in the newsroom in The Loudest Voice, but John Moody was anything but.

— The incident about Geraldo Rivera falsely reporting that he was in Afghanistan in the vicinity of where someone died from friendly fire when he was actually 300 miles away from the incident is absolutely true (and Geraldo did blame it on the “fog of war.”)

← Will 'Avengers: Endgame' Ever Beat 'Avatar' and Become the Highest Grossing Movie of All Time? | Eric Swalwell Abandons Presidential Campaign; Tom Steyer to Join the Race →