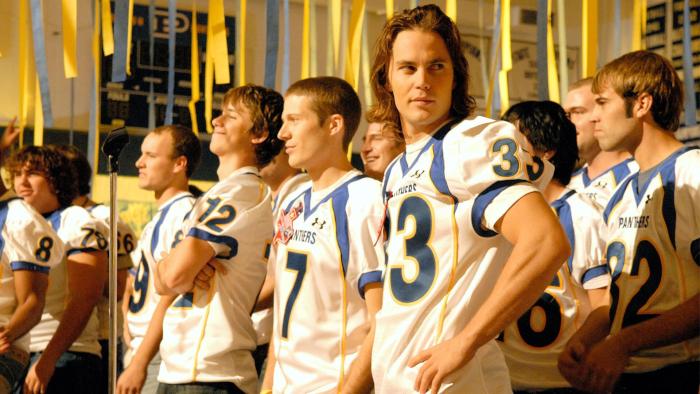 In something that might come as a shock for the readers, I had never watched the TV version of Friday Night Lights until recently. As turns out, I happened to like it very much. In fact, I can positively say it will become my go-to comfort food show. I know, who could’ve ever predicted that a writer from this here website would become a fan of Friday Night Lights?

I got the bug to binge the entire series because sometimes you have a craving for Americana. It’s something that happens to those of us outside the US, not so much despite but because of its cultural hegemony. Sometimes you have an aching to get a deeper read on your Imperial overlords through something uniquely theirs. I’m sure it happened to Celtic villagers in 50th BC trying Roman olive oil, to South Asians in the 1800s trying English Country Dance, or to any immigrant kid in the US trying fish sticks. It’s a moment where one, as a subject, gets to actually humanize the enemy. Worst case scenario, you slum it and give Applebee’s a try. Best case scenario, you discover the wonder of something like Friday Night Lights, something that is at once a celebration of the Deep USA, but also a blunt portrayal of what structural poverty does in the country where success beyond statistical probability is a moral imperative.

I wasn’t even through the glorious Season 1 when I kept going around the same question: Why didn’t it become a bigger hit? As it is well known, FNL struggled in the ratings, despite gaining itself a fanbase as devoted as one of them Football Towns, and one in a pretty good tax-bracket. But being this a show about Middle America, made with nothing but love and realism and on a major network, why didn’t Middle America embrace it and turn it into a huge hit?

Middle America makes a great deal about not being duly represented in the media. I mean, they only have the entirety of the GOP pandering to their every grievance, they are overrepresented in Washington DC, and they keep being portrayed as the spiritual heartland even though it doesn’t reflect how most of the US lives or looks like. It might be true that they are not given enough attention in film and TV beyond depictions as hillbillies. Can you tell me of any major TV series from the 1990s to the 2000s that was set in Missouri or Tulsa? Though Middle America might not be the largest audience out there, it does make for a cohesive group. When they show up, they turn things like American Sniper or the Yellowstone-verse into massive hits, as they are not fragmented into hundreds of alternatives. If you’d wish to extend the moniker of Middle America to everyone in the spectrum of conservatism, these are the people who keep CBS procedurals running for decades. They could’ve easily turned FNL into the kind of series that drew 15 million people a week back in the late 00s. I really can’t understand why didn’t it become a Middle American staple?

Was it because it was aired on NBC, the network of the Coastal Elites? But then, it was just a matter of playing it after Law & Order. Was it because of its documentary-cinema verité style of filmmaking? Yet it aired more or less concurrently with The Office and Parks & Recreation, which though sitcoms, were filmed in a similar style and would become some of the biggest hits of the late 00s-early 2010s.

Or was it because it was challenging, full of heartbreaking moments that were never melodramatic (WE DON’T TALK ABOUT SEASON 2) but something that most low-income Americans would have experienced? Those same experiences, if portrayed correctly, allow for catharsis, and what was FNL if not 76 chapters of catharsis? Plus, it was about NFL-rules football, one of the cultural tenets of Middle America. Let’s face it, sports are one of the few ways white, Protestant Americans have of processing their emotions.

Or was it because even though this is a love letter to non-pro NFL-rules football and what it means to an entire community, it encapsulated just how far from the endzone towns like Dillon are? Was it because football is shown as one of the few paths for young, economically deprived Americans to leave towns like Dillon, by being recruited or by marrying an NCAA recruit? How the dreams of becoming a pro player, even in a program that was like an Eton of NFL football, were a tall order at best, something accomplished by maybe one student per class? Was it because it portrayed the agony of places like Dillon, where the main goal is to leave? Is this what the structures of US politics and economy do to the places they claim to be the Real America?

Or was it because it showed just how unfairly the odds were stacked against the poor in the US? How someone like Tim Riggins, even after breaking through generational cycles of poverty and petty crime, manages to get into college only to realize he has been structurally deprived of the scaffolding of knowledge to get through tertiary education? How physical beauty, in a town like Dillon, becomes a commodity for women like Tyra Collette and her family, but just like a country’s commodities’ curse, it only keeps them shackled, subject to the whims of men and stagnant generation after generation? Was it because you just knew many of the school characters were “peaked-at-high school” types?

Or was it because it showed endearing, flawed, and fluid characters that balanced the gritty setting? Was it Buddy Garrity, my personal favorite and the Most Texan Man Alive, putting his most valuable belongings on the line just to show Santiago Herrera that he trusted him to host a party with his … “profiling-friendly” hood friends? How he underwent a transformation worthy of Bick Benedict in Giant to become a fatherly figure for Santiago (seriously, Buddy and Santiago’s plotline was the one great thing about Season 2 and they just dropped it)? Was it because someone like Lyla Garrity could just be the worst, but also kind, intelligent, and self-conscious? How she came to realize that she didn’t need to embrace born-again religiosity to make amends and find happiness and peace?

Or was it because of the many depictions of traditional, conservative but healthy depictions of masculinity, with characters like Coach Taylor, the Riggins brothers, or Matt Saracen all showing nurturing sides, growing out of their worst impulses and beliefs (often by making fools of themselves) and realizing that they would fail in their role as men if they stood in the way of their wives or girlfriends’ careers?

Or was it because the show, as best as a mainstream network show in the late 00s could, showed what it was like to be a Black person in Middle America and in the South? How segregation and redlining determine the funding and performance of school districts, exposing the darkest mechanisms of US institutionalized racism?

Or was it because its Black characters were outstanding? Because we had that Fusion Powerplant of charisma that was Gaius Charles as Smash Williams, someone who could be the absolute soul of every room he entered, while at the same time being stubborn, impulsive, lost, and hiding a deep hurt behind his charm? Was it because Smash dated several white girls? Seriously, I hope Gaius gets the career-boosting platform Zach Gilford got in Midnight Mass. Shout-out to Liz Mikel as Corinna Williams. Do I even need to mention Michael B. Jordan as Vince Howard?

Or was it because it showed how the US perpetual state of war became just another way out of places like Dillon, but one that only returned broken men unable to be emotionally present for their children … but at least they got a pension, scholarships, and healthcare?

Or was it how it tackled abortion head-on, taking a pro-choice stance by portraying how an unexpected pregnancy can be embraced or be aborted, both being equally valid, both being choices that made sense for the characters, according to where they were in life? (Also, f**k Luke Cafferty’s mom, we stan Tami Taylor in this home for following the protocol and being non-judgemental).

I mean, why couldn’t Middle America realize that underneath its study of a broken system, Friday Night Lights was also a tribute to the people it portrayed and everything good that football culture can bring? Considering it did not tackle NFL-football’s issue with concussions and rape culture, FNL was the most heartfelt and positive depiction you could get of red-state USA. The humanizing task was fully accomplished, what else does Middle America want?

Or is it that they don’t want to see themselves, even by way of a Hollywood Mirror, shown in the best light possible?

I wrote these “Or was it…?” questions facetiously, of course, but I would really like to read what y’all think in the comments.