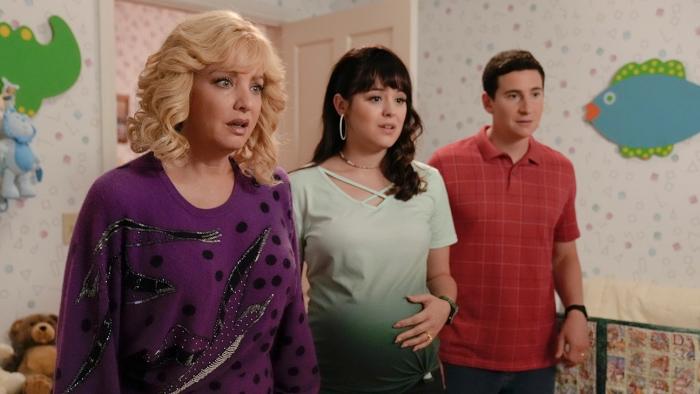 I’ve been trashing The Goldbergs’ 10th season for so many weeks now that I’ve forgotten why I started: Because The Goldbergs used to be a great family sitcom, and now it isn’t, and that makes me sad. It also used to be a show based on a real family created by a member of that family: Adam F. Goldberg (no, not that Adam Goldberg). When Adam F. Goldberg ran The Goldbergs, it was about a nerdy Jewish kid and his complicated, difficult, sweet, and deeply loving family, and it featured real home videos involving the real family members upon which the sitcom was based. We’d also occasionally see Adam F. Goldberg’s real mother — and other folks from Jenkintown, Pennsylvania who inspired the characters in the series — make appearances after episodes. Because we knew they were based on real people, I’m sure that Google searches about what happened to Adam’s real family members exploded after every episode.

Adam F. Goldberg left the series after the sixth season, which is when the series’ inexorable slide began. Honestly, the seventh season was still pretty good, and the series remained grounded in the home videos that ended each episode. Starting in the 8th season, however, the home videos disappeared, the characters stopped resembling real people and they all became caricatures, which in comedic terms always seems to mean that characters get dumber. Barry got dumber. Geoff got dumber. Even Adam got dumber. Before he was written out of the show, Murray was a human grunt. Beverly, who used to be an affectionately smothering mother, evolved into a woman who essentially stalks her children, sometimes literally.

By the ninth season, The Goldbergs had evolved into a disaster, where the most interesting thing about some episodes was in trying to discern whether the rest of the cast were actually in the same room during Jeff Garlin’s scenes, culminating in this CGI monstrosity.

Garlin was written out of the show, and by the tenth season, The Goldbergs was a husk of its former self. I don’t want to put words into Adam F. Goldberg’s mouth, however, and say that he was embarrassed to have his name associated with it, but close observers may notice that something changed in the title sequence between the 9th and 10th seasons:

Do you have any idea how embarrassed the creator of a television show must be of that show to have his name removed? I don’t think this is speculation, either, because the last couple of weeks, I’ve been noticing that someone, in particular, has been retweeting some of my The Goldbergs recaps: 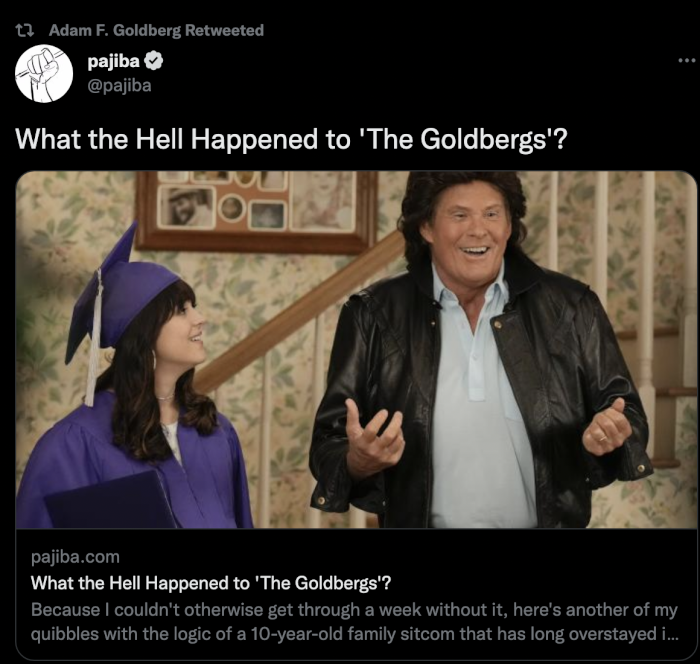 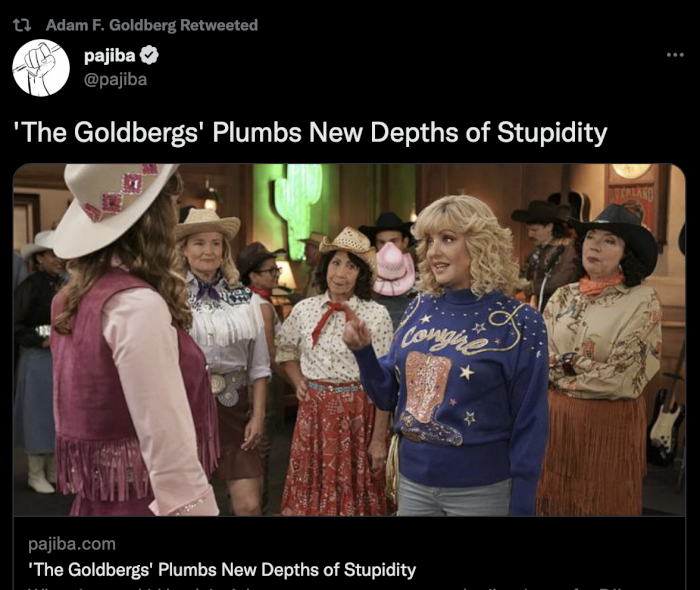 Most people do not have a lot of understanding of the industry, so I suspect that most viewers continue to associate the 10th season of The Goldbergs with the Adam F. Goldberg responsible for the first six seasons of The Goldbergs. To wit:

I don’t know what this means, but the episode I worked on this week was our 9th ep of The Muppets. Can’t wait for everyone to see it!

But let this be known: Adam F. Goldberg took his name off the show. He’s retweeting articles critical of the series. The show where Geoff compares his chapped nipples from running, to his wife’s nipples from breastfeeding, is not Adam F. Goldberg’s show. It may be the same actors playing the same characters, but it is not the same show.

Meanwhile, Adam F. Goldberg — the real person upon which Adam in The Goldbergs was based for six seasons — has moved on and has created The Muppets Mayhem, a musical Muppet series that will debut soon on Disney+, and he’s also a consultant on the second season of The Mighty Ducks: Game Changers (which, like the old The Goldbergs, is a solid family show). Adam F. Goldberg, however, doesn’t even include The Goldbergs in his Twitter bio anymore (although, he does include Breaking In, which I adored in 2011).

Rolling in my bed is more like it. I’m still alive ya know.


← 'Top Gun: Maverick' Is Even Better With a Kitty | 'Stutz': Jonah Hill Made a Movie About His Therapist and It's Pretty Interesting →