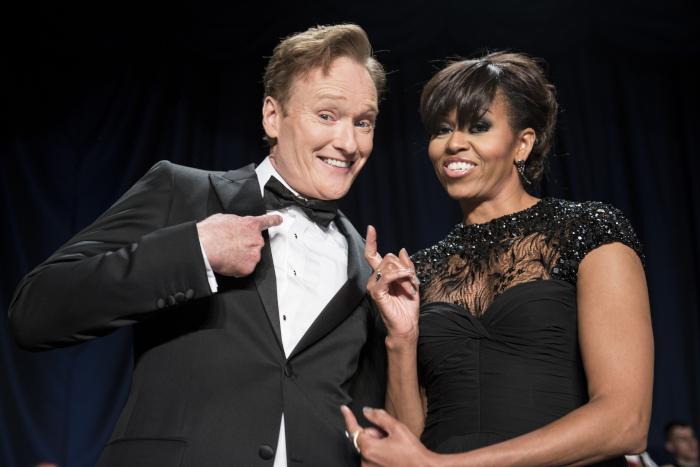 We’ve all said it. When you stub your toe, when your cable goes out, when you have to say goodbye to your old doctor in exchange for one that fits your new health plan. “Thanks, Obama,” has become a response for the mundane and the … significant. Turns out, we’re not the only ones who curse Obama’s name (jokingly or otherwise). Even the Obamas do it!

On her recent (and second) appearance on Conan O’Brien Needs A Friend, the podcast for the eponymous talk show host, Michelle Obama revealed that she will often use the catchphrase herself. It all begins with Conan reflecting on Donald Trump’s current campaign for president. “Don’t you hate what’s been happening the last couple of years? Well, it’s all going to end, if we could give Trump a chance,” O’Brien exclaimed, frustrated by the “insanity” of that sentiment.

The former First Lady then chimed in, reminiscing about how, when her husband was president, “Thanks, Obama” was the thing to say. “My dog died, thanks, Obama,” she joked. When pressed by O’Brien on whether or not Michelle uses that around the house she said, “Oh no, we do all the time, all the time.”

Y’all, this honestly made me kind of emotional. First of all, there is a sense of humility that is greatly lacking in the current administration. There’s this idea, presented by them, that nothing is their fault. It’s childish and at times sickening. Say what you will about Barack Obama’s time in office, but he and his family were, and still are, something to aspire to. Michelle Obama was a large part of that.

A lawyer, activist, author and now podcaster (cause who isn’t), Michelle Obama has the kind of charm and sophistication that should make her status seem unattainable. However, she presents herself in such a grounded way it flips that whole idea on its head. Aptly enough, in this episode of Conan’s podcast you want to be her friend. You understand why she’s able to do what she does. And, if you’re like me, you miss having her in the White House. But SOMEbody didn’t make it so he could stay in office an extra term. Thanks, Obama.