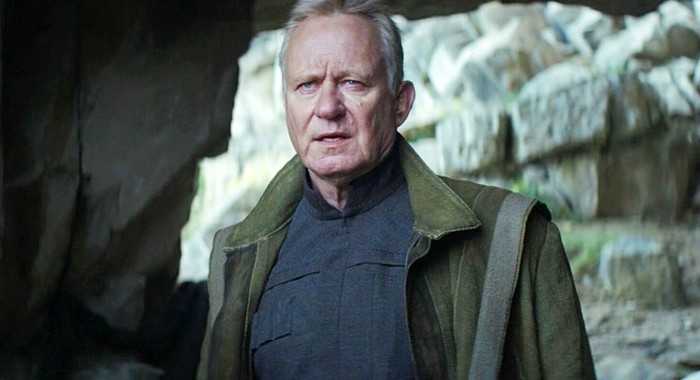 Aw Man, Someone Got ‘Star Wars’ All Over My ‘Andor’

You know how in a lot of prestige TV series the penultimate episode of the season is often the best because it sets up all the crazy sh*t that’s about to go down in the finale? Well, Andor is not one of those shows.

Before the knives come out, I just want to say that dollars for donuts, Andor is still one of the best pieces of Star Wars in a long time. I absolutely love the show, which is also why I have to be honest when it stumbles. And, frankly, it’s goddamn amazing that literally every single episode week-to-week has been f*cking outstanding. Statistically speaking, Andor had to miss at some point, and “Daughters of Ferrix” is that extremely rare miss.

In fairness, Episode 11 had the daunting task of following the Narkina 5 arc, and one could easily argue that it was doomed from the start. However, it didn’t help that this latest episode was noticeably missing a narrative and cinematic tightness that has come to define Andor. At first, I thought the problem was director Benjamin Caron, but he delivered the absolute banger of an episode where Cassian gets arrested on his sex-cation. Okay, so maybe it’s the writer? Nope, showrunner Tony Gilroy penned this one, and he was on fire with the first four episodes on top of shepherding everything up until now.

So what went wrong? There seems to be only one culprit: Andor finally became a Star Wars and was lesser for it. 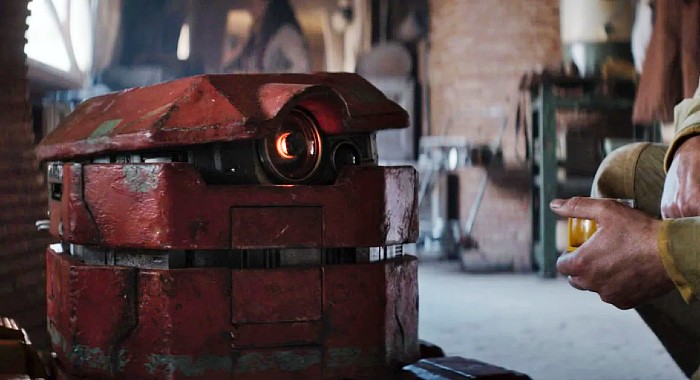 Despite proclamations about this being one of Andor’s weaker episodes, obviously, there were still highlights. The show didn’t completely sh*t the bed or anything, it just lost a step or two. However, with an exception I’ll get to later, its characters still delivered, and I’ll be damned if a droid who got pissed on in the premiere didn’t steal my heart.

In a surprising, but not entirely unexpected move, Cassian’s adoptive mother Maarva (Fiona Shaw) is dead at the start of the episode. She had been sick earlier in the season, but it seemed like maybe her illness would draw Cassian back to Ferrix for one last visit. Andor, as always, had bleaker plans. Maarva kicked the bucket, and her droid B2EMO (Dave Chapman) is a devastating wreck. The poor little guy is beside himself, and Brasso (Joplin Sibtain) treats him with the kind of respect this franchise hasn’t shown its mechanical counterparts since Solo, a movie that slaps. I’m talking Brasso gets talked into a sleepover because he genuinely feels bad for a heartbroken droid. It’s touching as hell — and also foreboding as hell. Only now during this recap did it hit me that in Rogue One Cassian is palling around with a droid buddy who is not B2EMO. So… goddammit.

Anyway, Maarva’s funeral appears to be the catalyst for getting Cassian back to Ferrix where not only is the Imperial Security Bureau laying a trap, but Cinta (Varada Sethu) is patiently waiting to blow our boy’s head off so he can’t identify Luthen (Stellan Skarsgård). Oh, and for some extra added fun, Syril (Kyle Soller) knows that Cassian’s mom died, so he’s almost definitely going to barrel into this sh*t show. As for Dedra Meero (Denise Gough), she sadly didn’t get to do much this episode except tersely issue commands from a viewscreen in an unfortunately very Star Wars-ian move. Adios, intricate and intriguing ISB office politicking! 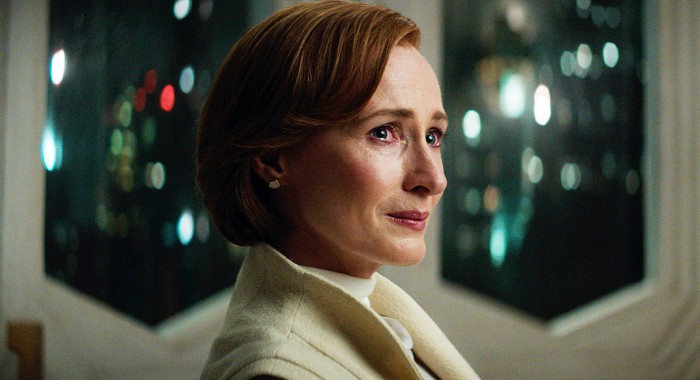 The Twisting of the Knife

Last week, Andor delivered one hell of a shoe drop by confirming fears that something was going to happen with Leida (Bronte Carmichael), the teenage daughter of Mon Mothma (Genevieve O’Reilly) and her douchebag husband Perrin (Alastair Mackenzie). Unfortunately, that something was a fate worse than death. In order to keep her Rebellion financing hidden from the Empire and its increasingly invasive auditing of accounts, Mon is staring down the barrel of dooming Leida with an arranged marriage, a prison that Mon knows all too well.

The aforementioned knife twist, however, is for Vel (Faye Marsay) who was recently revealed to be Mon’s cousin. She’s still on Coruscant doing shadowy work for Luthen. Although, it’s becoming clear that Vel lacks discipline. She visits his shop and only barely commits to the subterfuge while talking to Luthen’s assistant/highly competent partner Kleya (Elizabeth Dulau). Vel also revealed that she knows Luthen isn’t there because she checked for his ship, which is also against his meticulous protocols. She clearly has pressing info to share, but her privileged upbringing is also starting to shine through. (Kids, the character work in this show is fantastic.)

While getting a little Space Karen-y, Vel brags that she delivered the Aldhani heist as she challenges Kleya over who has delivered more for Luthen lately. Kleya puts Vel in her place by pointing out that as Luthen’s right-hand she is “always” delivering for him by dealing with “needy panicked faces” like hers. With that little spat over, Vel finally coughs up that Maarva is dead and it’s getting “busy” on Ferrix. Kleya makes it a point to note that she’ll make sure Luthen knows the intel came from her. For a moment, I thought it was strange that there seems to be a lot of jockeying to stay in Luthen’s favor. Then I remembered the first conversation that Vel and Leyda had on-screen involved putting a blaster blot in Cassian because he knows Luthen’s identity, so yup, that’ll do it.

Riding high on being a good little spy, Vel stops by Mon’s apartment where she’s instantly pissed to learn that Leida is taking some sort of Chandrila religious classes. (In a shocking twist, not even Perrin is on board with his daughter following the old ways, and that guy sucks.) Vel is not liking any of this, and she goes right to the top concern: Is Leida taking suitors? The look on Mon’s face confirms the worst.

Once again, Genevieve O’Reilly anchors an episode of this show with a standout performance. She confesses to Vel about last week’s betrothal request from Davo Sculdun (Richard Dillane), and this scene is where the writing on Andor truly shines. While revealing her circumstances to Vel, Mon is also revealing to us, the audience, that she is more screwed than we realized. Her financial problems are far more dire than just trying to find funds for the Rebellion. Mon already engaged in suspicious financial moves that are about to be exposed if she doesn’t cover up her tracks with Sculdun’s money.

As for what triggered the Empire’s increased scrutiny? Aldhani. Welcome to the knife twist.

After Vel bragged about the heist earlier in the episode, she’s now seeing the blowback from Aldhani up close and personal. Mon doesn’t know that Vel was part of the heist, but there’s a pained expression on Vel’s face as all of this hits home. Her actions just doomed Leida to an arranged marriage thanks to Luthen’s accelarationist plot. There’s also a palpable sense that he may have been somehow involved in Mon’s financial trouble. Vel asks Mon if Luthen knows about her account problems, and she defeatedly answers that she doesn’t know what he knows at any given time. The guy’s a real dick is the overall theme here.

And on that note… 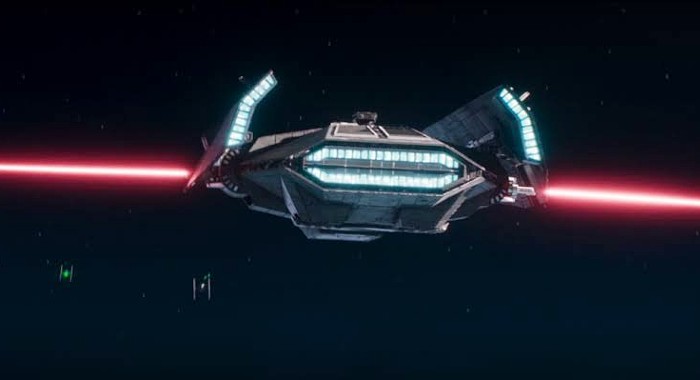 If last week’s beautifully written monologue was Luthen firing on all cylinders in pure, 100% Andor mode, this week is what happens when you can no longer shield him from being in a Star Wars.

After seemingly justifying to himself and Lonni (Robert Emms) that Anto Kreegyr’s pending Rebel assault on Spellhaus needs to waltz into a trap so the ISB isn’t aware that Lonni is Luthen’s mole, this week’s episode saw Luthen… basically go through that whole argument again. Granted, he is clearly torn by the decision, but this time around, Luthen is going to manipulate Saw Gerrara (Forest Whitaker) into assuring him that it was “for the greater good.” It’s kind of a one step forward, one step backwards scene that highlights both Luthen’s inner struggle with tossing 30 men into his Rebellion meat grinder and how easily he can bend people to his whim. It also explains why Saw is a paranoid wreck by the time Rogue One rolls around. He’s had his mind f*cked by the best.

OK, so that scene was a little off. At least this show won’t do something batshit crazy like entirely justify all of the “Is Luthen a Jedi or a Sith?” theories floating around. Except, no wait, that’s exactly what happened. Folks, last week I would’ve physically fought anyone who even hinted that Luthen is anything but just a super smart dude. “That’s not what Andor is about,” I would’ve argued. Now? Go bananas.

In what I’m hoping is just a misguided attempt to create a badass action moment, Luthen escapes almost being boarded by an Imperial cruiser outside Coruscant through some crafty maneuvering that we’ve seen in the first arc when he meets Cassian. Nothing too crazy so far. However, things quickly take a turn when — and I shit you not, you saw the pic — his goddamn ship sprouts lightsabers. And not just any lightsabers, I’m talking a red, Darth Maul-looking double saber dealie. What in the freaking hell?

At this point, I still don’t believe that Luthen is a Jedi in hiding or a Sith or anything like that. But I can no longer fault anyone who is leaning in that direction after the dude literally sliced apart TIE fighters with his lightsaber ship. I honestly don’t know what I’m supposed to do with that information or how I’ll feel if Andor shoots itself in the foot by playing the surprise Jedi/Sith card.

You know how I said last week that I’d love to see this show apply it’s gritty take on a brief, but dramatically compelling Vader scene? Yeah, that feeling’s gone. I’m an idiot. You should seriously question reading anything I write ever again.

— Because everything has to be a thing these days, Andor has been getting flak for being too “human-centric.” It’s boasting an insanely diverse cast, and yet people are still complaining that the show is being racist towards… space aliens? It got to the point where Tony Gilroy actually had to address the concerns during a recent interview. Well, Episode 11 had aliens right out of the gate, and it totally messed with the show’s vibes. You could’ve easily dropped this scene in Book of Boba Fett, and it would’ve fit right in. Apparently, this was a big week for everyone being careful what they wish for.

— This has been bugging me for a while, but it really came to a head this week. Who made the call to have not one, but two characters whose names are crazy close to Leia? You have Mon’s daughter Leida, and Luthen’s right-hand Kleya. On top of that, both of them could easily pass as the iconic princess. It’s kind of weird, and I can’t help but wonder if it’s intentional.

— Way back in the Episode 2 and 3 recap, I raved about Alex Ferns’ character Sergeant Linus Mosk. I loved that rotund little man with his Scottish brogue talking about “fomenting pockets” and being the wee bonny edge of the Empire’s knife. He was the perfect example of this show really making every corner of the Star Wars universe feel alive. Well, he briefly reemerged this episode, and they completely wasted him. Like Dedra Meero, he appeared on a video screen for the sole purpose of telling Syril that Cassian’s mom died. It was genuinely depressing, and I may even hate this decision more than the lightsaber ship. The goddamn lightsaber ship. 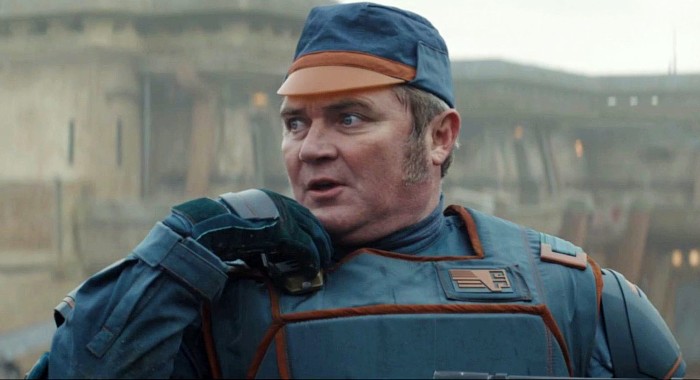 ← Olivia Wilde and Harry Styles' 'Priorities' Drove The Couple Apart | 'The Menu' Is Food Snob 'Succession,' Until It All Goes Deliciously Sideways →