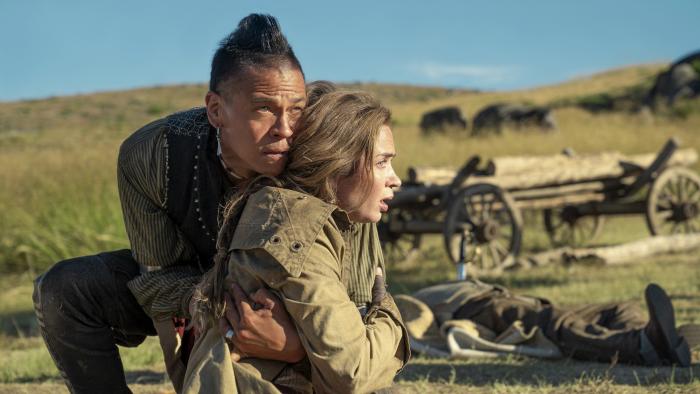 Emily Blunt's 'The English' Is a Brilliant Reincarnation of the Western

Right before I hit play on The English, I made a joke about what if the cinematography sucks and I have nothing nice to say about it. (Am I bitter after the garbage television journey of my last review? Who knows.) In hindsight, that’s hilarious to me, because The English is one of the most beautifully shot TV shows I’ve seen in a long time, with its deliberate genre landscapes, dramatic close-ups, and dark silhouettes achieved with consistent excellence on the small screen.

Hugo Blick’s six-part drama is a scouring, confident ride into the genre of Westerns a la Sergio Leone, with its levels of action and camp balanced by top-tier performances and incredible visuals. Set in 1890, the show follows Lady Cornelia Locke (Emily Blunt) as she sets out into the wilds of newly minted western territories, with the mission of vengeance against the man who she holds responsible for the death of her son. She teams up with Eli Whipp (Chaske Spencer), a Pawnee man from whom the American invasion took everything, and who then served for years as a U.S. cavalry scout. They’re both fantastic characters superbly realized in story and performance, both bundles of painful cultural and emotional contradictions set on something more to do with dignity and justice than survival.

The cast is rounded out by Stephen Rea as a small-town sheriff, Valerie Pachner as a local widow embroiled in a murder mystery, Rafe Spall as the unscrupulous and vicious invader who infuriatingly reaps the rewards, and Gary Farmer as a Native man living on the edge of morality. With exceptional appearances by Ciaran Hinds and Toby Jones and a number of other familiar faces, this sprawling drama is populated by exceptional talent supporting the weight of complex and arresting characters.

Two exceptionally strong episodes kick off the series, with the patient lines of “magic” connection drawing the plot into shape. Cornelia and Eli collide in perilous circumstances and begin to forge the relationship that will be the emotional core of the series. I also enjoyed the slower, talkier bits which I’ve seen called “languid” elsewhere; for me those sections were equally rewarding as the action and graphic violence. It all slides toward the inevitable dramatic showdown in Hoxem, Wyoming in true Western style.

The lines of connections between characters—the connections that ultimately drag Cornelia into the violence and vengeance playing out on the other side of an ocean—are managed with delicate suspense. How it all hangs together is slowly spooled out over the course of the series, with questions left lackadaisically open.

For most of the series, justice is a loose and elusive ideal that feels too ridiculous to mention, although it’s the driving motivator behind both Cornelia and Eli’s journeys. Cornelia knows the law will never hold her son’s killer accountable; Eli is trying, without much conviction, to get the U.S. government to keep its promise of land to servicemen. Lawless seems too easy a word to throw around for that Blick depicts with The English. So does corrupt. The land itself, rather than a fertile promise of commerce and growth, seems to physically and spiritually corrode the various flavors of “English” who encroach on it. That corrosion is pervasive and, in turns, shocking. There are a few particular visuals, among them Black-Eyed Mog (Nichola McAuliffe) and our last glimpses of one of the central baddies, that are absolutely going to stick with me for the outstanding and disturbing quality of their effects.

There are a lot of different kinds of doom at play here: hope is a poisonous influence that leads more than one character to embark into a future that’s rotten from the bottom up. From glimpses of Indian schools that aim to strip away surviving Native peoples’ identity to European immigrants murdered for not speaking English, The English looks squarely at the grotesque historical realities of the old west while doing so through the visual language of the Spaghetti Western. It delivers its blows calmly and patiently, with absolute clarity about what it wants to achieve.

This short mini-series isn’t getting the noise it deserves, as it wades into a whirlwind of prestige TV. But do yourself a favor and give it a shot. It’s something to see.


← 'Stutz': Jonah Hill Made a Movie About His Therapist and It's Pretty Interesting | Pop Divas vs. The Pandemic: Carly Rae Jepsen, Taylor Swift, and Rina Sawayama →