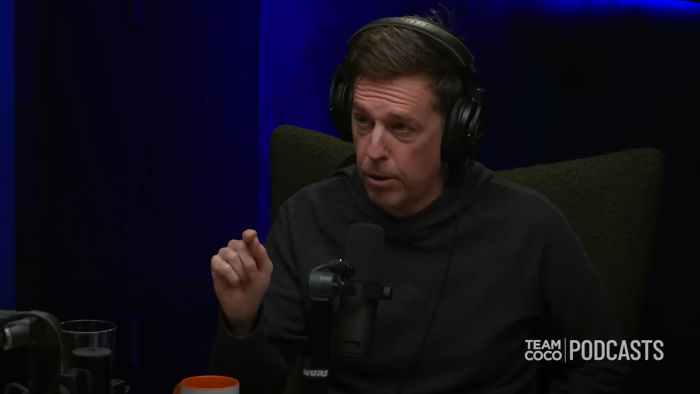 Ed Helms Once Turned Down A Job Working For Conan O'Brien

It’s crucial to make accept where you are in life. Feeling good about where you are in the present can help you make peace with the past and focus on the future. It isn’t always easy. We’ve all had opportunities we didn’t capitalize on or goals we didn’t meet. But, if you are happy with where you are, you’re less questioning of where you’ve been. Just ask Ed Helms! Well, you don’t ask him. Conan O’Brien will ask him. You just sit back and listen.

On a recent episode of Conan O’Brien Needs A Friend, the star of The Hangover Trilogy and The Office, Ed Helms, popped by to talk about his career. At one point, he mentioned that he had almost interned for Conan in the early 2000s. A young Ed Helms came in to interview with The Late Show, but also snagged an interview with local NY News. He got offered the news job on-site, accepted and was offered a late-night job a week later. He didn’t take the late-night job because he had already accepted the news job.

Ed could lament about his missed opportunity to get Max Weinberg coffee, but why? His life has turned out pretty great! The same logic works in reverse as well. In early 2020 I was cast in a reboot of the late 80s show Thirtysomething. It was a pretty big break. My scenes in the pilot were set to shoot on March 26th, 2020. In other words, my scenes were never shot (nor was the pilot), and I did not end up on TV. I did end up the father of two beautiful twin boys. I was brought into the wonderful community that is Pajiba. Things are great, even with a missed opportunity like I had.

Life can work that way for anyone if they want it to. Looking on the bright side of life may sound like a cliche, but life is pretty dang great. It may not always go the way you want it to, but that’s part of the fun. You just have to roll with the punches.