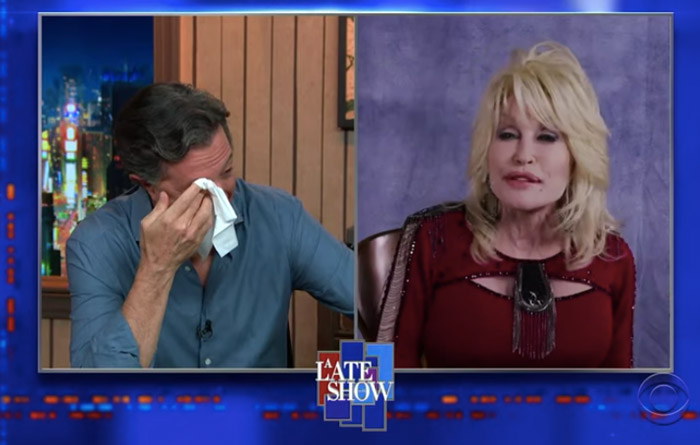 Dolly Parton is a national treasure to the point where some have proposed her smiling face should replace Confederate monuments. She’s given us gifts on stage, screen, in movies, music, and memes. Plus, she’s told white people to not be racist morons. Then last night, she made Stephen Colbert cry on his own show.

Does that seem out of left field? Clearly, you don’t understand the power of Parton.

Here’s a clip from The Late Show With Stephen Colbert:

.@DollyParton sings “Bury Me Beneath The Willow” and I think somebody is cutting onions. 😭 #LSSC pic.twitter.com/zoUmBN77vZ

Parton went on the late-night show to promote her new book, Dolly Parton: Songteller, which includes the lyrics of a lot of her songs, the stories behind them, and personal photos from her childhood. Parton recalled how her mother used to sing old songs that weren’t just sad, they were “plum pitiful.” Then, the many-times Grammy winner smoothly moved into singing, “Bury Me Beneath The Willow Tree.” This soulful snippet was enough to make the famous funnyman tear up.

You too, right? It’s cool. As Colbert puts it, “Sometimes there’s nothing happier than a cry.” To which Dolly replies, “It cleanses your soul.”

You can watch the full interview here:

And to hear Parton sing the full version of “Bury Me Beneath The Willow Tree,” let’s look back to her days on The Dolly Show: