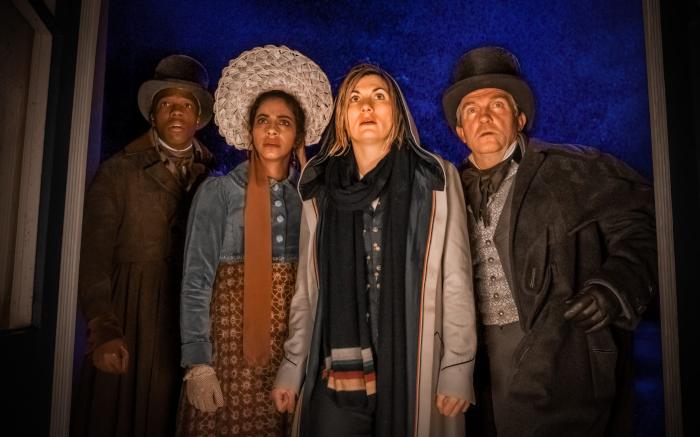 ‘Doctor Who’ Recap: Beware the Lone Cyberman. And The Randy Poet.

It’s safe to say that this season of Doctor Who has seen some ups and downs. This week’s episode, ‘The Haunting of Villa Diodati’, was definitely one of the highlights, bringing a heady mix of history, scares, knowing chuckles, a link to a wider arc, and for the second time this season, a starring role for a member of the Byron family.

It seemed like the show had almost given up on itself this season, with the promo materials counting down to the two-part finale (starting next week) and thereby seeming to write off episodes 6 and 7 as filler. They were a bit better than that; I’d go as far to say that they were fine. ‘Praxeus’ took us across the world in pursuit of a cure for a terrible virus, including a trip to the bottom of the sea, right under Garbage Island. Notable character development for Yaz showed that she’s become so accustomed to getting randomly zapped places that she now seeks it out. I’m sure that won’t end in tears. ‘Can You Hear Me?’ gave us spooky chaos god Kevan Lannister spreading nightmares with the most terrifying wet willy experience you’ll ever see, and hinted that some of the team might be having second thoughts about spending all their days in the TARDIS…

The Team needed a holiday, and this time, the Doctor’s choosing the destination. No all inclusive resort this time, oh no. It’s the original Spooky Con — a bunch of sexually adventurous emo types stuck indoors during the year without a summer, making ‘come hither’ eyes at each other and pausing only to write genre-shaping works of genius. Trouble is, they haven’t quite got round to the writing part yet, the house has gone squiffy, and Percy ‘Bysshe Please’ Shelley has gone AWOL… Spoilers are ahead!

One of the Doctor’s rules for the team this week was don’t snog Byron. If Captain Jack had been there, he would have broken this rule in a heartbeat. But the universe can’t allow that amount of sexiness in the same place at the same time. It would create a pants-shattering phwoaradox, you see. Basic phwoarsics. Jack may have been absent, but his warning from episode 5 is right there. Beware the lone Cyberman. Don’t give it what it wants. At all costs. In the end, the Doctor only broke one of those cardinal rules. Her decision was “Save the poet, save the universe”, but it’s more like “save the poet now, prevent lots of universe-altering ripple effects as a result, then figure out how to save the universe from a delete-happy Big Bad later.” That wasn’t quite as catchy. (It’s never snog the poet, save the universe, is it? Sigh. You can bet that’s Byron’s new chat-up line though.)

The time at Villa Diodati was brilliant fun, weaving in a clear love for the history from writer Maxine Alderton with lots of scary silliness, classic haunted house tropes, and a truly gruesome, mangled version of a Cyberman who wanted his shiny McGuffin back. Everyone seemed to be having a ball making this one: Byron was being a swaggering cad one minute then using Claire Clairmont as a human shield the next; Mary was tough as nails, and trying desperately to see the humanity inside the broken cyber helmet; Claire eventually stopped mooning over Byron and told him off; Polidori stopped sulking long enough to inadvertently solve a mystery in his sleep, and Fletcher the servant did some excellent eye-rolling and eyebrow acting to show he’s really had enough of these bloody poets and their shenanigans. Percy Shelley learned a valuable lesson about picking up strange shiny things, and was shown the moment of his death by the Doctor in order to trick the McGuffin out into the open, which, uh, well, it explains a lot about the Romantic sensibilities to be honest.

How’s that team dynamic holding up? The Doctor had to pull rank on them at the end, but it’s not the first time she’s chided a companion — or humans in general — for being a bit laissez-faire about sacrificing lives for a cause. The Doctor does not care for the trolley problem, folks. Will the whole team survive the finale though? At this stage, it’s anyone’s guess, but it’s worth bearing in mind that Tosin Cole has been cast in AMC’s new series 61st Street, and may have scheduling conflicts coming up if he stays in Doctor Who, so if there were to be a surprise exit, the money would be on something bad happening to Ryan…

Ada Lovelace was a much more useful person to have around in a crisis than her dad, which should surprise no-one. I confess, Byron is one of my historical crushes. Come on: sexy bad boy who can turn on the charm, has an allegedly sensitive side that few can see, and writes beautifully about it? Yep, that’s on brand. Fetch the smelling salts and bring me a hanky to wave! But even I will admit, he was a bit of a wrong’un.

Claire Clairmont realised that too, so huzzah to her for getting over her crush and dumping him! Just…don’t Google what happened to their daughter. In fact, don’t Google anything about the Shelleys’ children either. Nothing but sadness down those rabbit holes.

It totally makes sense that Frankenstein’s creature was inspired by a half-finished Cyberman charged up by lightning. In fact, let’s just call that canon right now.

The Doctor will not lose anyone else to the Cybermen. No. Not after Bill.

Did Graham ever find a lav? He didn’t seem keen on using that strategically placed pot under the table. It’s a cruel haunted house that hides bathrooms, right? And who were those actual ghosts? Did they make him the sandwiches? Do ghosts do that? This is a mission for Kate, I think…

Next week: The two-part finale starts with ‘Ascension of the Cybermen’. If legions of Cybermen scare the pants off you, best make space behind the sofa now!