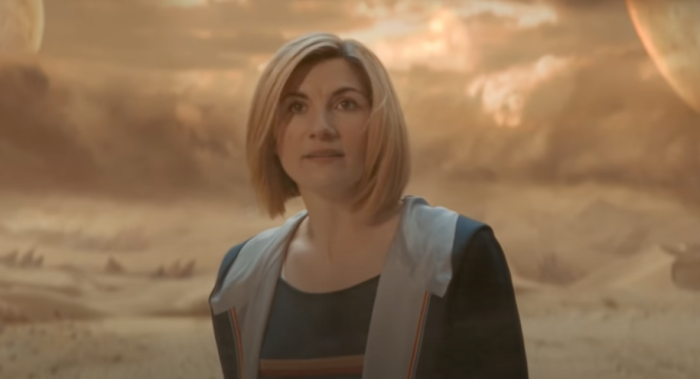 'Doctor Who' Recap: Let's Not Do That Particular Time Warp Again, Eh?

Previously, on Doctor Who: Episode 2 of Flux was a bit more restrained than Episode 1, but still brought some bonkers energy of its own. The Dusty Disco Twins, Swarm and Azure, took over the ruined temple on Planet Time, capturing Yaz and Vinder in the process. Dan and Space Doggo took on Sontarans in Liverpool, while Thirteen and the doomed Light Brigade took on a whole load more Sontarans in Crimea, as you do. Here’s my recap for episode 2 if you missed it!

This week: Oh boy, if you weren’t keen on episode 1, you probably sighed a lot this week. And you might have a headache. There are a few highlights, but they were lost in a lot of experimental timey-wimey meh. It certainly was a thing that happened. Well, some of it sort-of happened. In other news, I regretted using my ‘what the flux is going on’ joke so early in the season. Spoilers will follow!

Public Service Announcement: Don’t listen to anyone who tells you that the plot of this episode was complicated! It’s a lie! It’s totally simple. Right, the Flux is bad, and while it’s being bad all over the universe, lots of other Big Bads around the universe think it’s good for them to be extra bad, to take advantage of the bad. And the Biggest Bads of all are the Dusty Disco Twins, but they’re not really responsible for the Big Bad Flux, because another Big Bad is. Nor are Azure and Swarm responsible for the blue swarm of dots that dusts people. Even though they are called Azure and Swarm. And they dust people. Totally different.

Now, the Dusty Disco Twins had a great idea to wreak havoc on… the universe? The Multiverse? Let’s go with Multiverse. They imagine a battle between time and space, where time wins because space can’t contain time. Because time is bigger than space, so there isn’t enough space. They go to the place that attempts to control time, to mess with it and unleash time from the space where there isn’t enough space. But they are stopped in their tracks by the Doctor, except it’s not really the Doctor even though it looks like the Doctor because she’s trapped in a memory from her timeline that she can’t remember and she’s really Doctor Ruth. See! Easy peasy!

Hang on, I’ll try again. Thirteen tries to save Yaz and Vinder by jumping onto the temple’s special time monitor plinths, and taking Dan with her. They all fall into the Time Storm together, and Thirteen hides them all in their own timeline in order to keep them safe from things like the blue swarm of Time Force Particles, which are hunting out timey-wimey errors across the universe and there are a lot of timey-wimey errors because time is broken. Fixing it is too much for her though, and she pings around all over the time place, popping up for ghostly cameo appearances in her friends’ memories when she can, but often getting pinged into her own timeline as well. There, she learns about the Dusty Disco Twins’ first attempt to unleash time.

I was psyched to see Doctor Ruth again, but also a bit peeved that we were robbed of a full Doctor Ruth story starring Jo Martin, with her faithful Space Doggo at her side, because that would have been awesome! Instead, as with most of the other warped memories, most of the other roles are played by the main cast, which absolutely doesn’t start to make this needlessly confusing. (START?!) The twins use Passengers — containers of millions of souls — as hostages, but Doctor Ruth (in full Division Agent mode) has infiltrated the Passengers with a Passenger full of Mori, who pop out of the Interloper Passenger and take over Time Guardian duties in the temple. The Dusty Disco Twins are like ‘noooooooo’ and are arrested by Division. Swarm is sent to Space Prison for thousands of years. Azure somehow ends up stashed in a human in episode 1. Because that’s the same.

When the Twins break out, they head back to the temple, because they have literally one idea between them, but it’s hard to be strategic when your head is made of crystals, I guess. This time the plan is totally different. They use a Passenger as a hostage and… no wait, it’s the same. Seriously. Heads full of rocks, those two. This time, they have Dan’s sort-of girlfriend Diane trapped in there. DIANE! That’s where you went! The Mori get the Time Storm and the temple back under control again though, because when the problem’s the same, one may as well use the same solution. But the universe has sustained a lot of damage, so things are still in flux, because of The Flux, which is still the real Big Bad, and was created and unleashed by another mysterious Big Bad.

I said there were highlights, didn’t I? Well, Doctor Ruth was one. And the new character, Bel, was fab, even though you might be forgiven for wailing ‘ANOTHER ONE? TOO MANY PEOPLE!’ at your screen. Bel can take on Daleks, Cybermen and the Blue Swarm of Dusty Death with some quick thinking, quick shooting and earnest talking. Plus she has a cute tamagotchi thing, and she turns out to be Vinder’s long lost lady love. Awww. Vinder’s trip down memory lane helps to flesh out his character a lot, showing us his Good Guy creds as the noble whistleblower against the tyrannical Grand Serpent boss man, who looked eerily like Benedict Cumberbatch and was clearly overcompensating for something with that nickname. I also loved Police Officer Doctor’s rambling monologue about a trip to the shops.

Thirteen and Yaz have gone from alleged besties to seeming quite contemptuous of each other, which is odd. But Yaz being stalked by a Weeping Angel was also classically creepy Who territory, and sets up next week’s episode, where we’ll find out what happened to Claire, and also, presumably, who Claire is.

The whole thing though? It didn’t do it for me. I respect the choice to mix things up and experiment, but this seemed a lot more self-indulgent than it needed to be. And there was nowhere near enough time with Doctor Ruth and Space Doggo.

Seriously, Mutton Chops Mine Man is just going to pop up randomly all series long?

Who was the lady who gave Thirteen the rather lacklustre pep talk of ‘just give up on this universe, dear, the Flux was aimed at you’? Got to be Gallifreyan right?

The TARDIS is still looking very unwell and in need of a makeover. Has anyone checked on the Custard Cream Dispenser lately?

Those pesky Dusty Disco Twins escaped to mwahahaha another day; what will their next plan be? LET ME GUESS: hmmmm, will it involve some time-wimey shenanigans at a temple? SHOCKER!

When Azure and Swarm dust people, do they kill them or are they getting them to fit inside the Passengers? When they dust a Passenger, are they fitting the Passenger inside another Passenger? Or are they sending all those dusty victims to live on a farm a long way away or something?

Thirteen was described as suffering from Temporal Haze a few times. I think that’s just a sci-fi term for excessive gin consumption…

Until next time: I won’t be 100 per cent convinced this wasn’t all some sort of fever dream until I see the recap for episode 4…