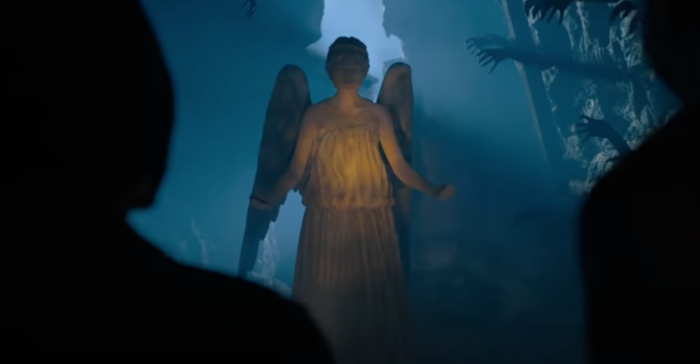 'Doctor Who' Recap: Some Nightmare Co-Workers And A Petrifying Trip To The Past…

Previously, on Doctor Who: Last week’s installment still feels like a fever dream. By the end though, the Ravagers disappeared, Vinder went in search of Bel, and Thirteen, Yaz and Dan were trapped in the TARDIS with a Weeping Angel. Here’s my recap for episode three if you missed it!

This week: This was the strongest episode of the season by far. It’s a classic horror episode, with the team facing hordes of Weeping Angels and getting some dry eyeballs in the process. And I try really hard not to make a truly terrible ‘petrified’ pun. Spoiler alert: I already failed. Other spoilers are incoming!

The Weeping Angels are arguably the best Nu-Who villains. Their introduction in ‘Blink’ was genuinely chilling, and though they may be on the verge of becoming overused, they are still creepy as hell, and perfect for more low-tech episodes that need some solid horror. Where a lot of Who villains fall apart is in the Silly Voice Monologues, and the Weeping Angels have neatly escaped that problem; all they need is a stony glare. Their lore has gradually expanded with each new iteration, and they bring all of this mojo to Flux’s fourth episode. Sneaking up? Check. Breaking out of images? Check. Taking over a person? Check.

Some of the Angels seem up to their usual tricks, aka sending people back in time and feasting on the energy of the lives unlived, but these ones are mainly hunting an Angel who has gone rogue, and has been hiding in poor Claire from episode one. Claire is leaking dust from her eyeballs and looks terrified when her hands look like they are turning into stone. You might say she’s feeling p… [Dammit, Sole, no. Resist the pun. Breathe.] Speaking through Claire in a psychic chat with the Doctor, Rogue Angel explains that she wants Thirteen to help her escape in exchange for leaving Claire alone and delivering up all her knowledge of the Doctor’s past, specifically her involvement in Division. Thirteen was desperate to learn about this last week, and is equally keen to save the lovely Claire, so she agrees.

Ah, Division. In my episode 1 recap, I wrote that it was unclear just how morally iffy Division was, and based on its recruitment of Weeping Angels and any other assorted Big Bads, it turns out they are probably very shady indeed. Either that, or they are a really proactive equal opportunities employer. Are Weeping Angels great recruits for Division agents? I guess you could sic Weeping Agents on Bigger Bads, but if they just ping them to another time, aren’t they just kicking the can down the road? Or back up the road? Won’t those Bigger Bads just wreak havoc further back in the past, or wait a few decades to make a really peeved comeback? If a Weeping Angel is only lethal on strike 2, surely that’s not very efficient? I feel like I’m on a Division recruitment panel, weighing up pros and cons… Points in their favour: quiet in team meetings. Stare at them once you get to AOB on the agenda, and we can all finish on time. Cons: they find commuting a challenge, and working from home is out because they are rubbish in Zoom meetings. “Can you pop your camera on, Agent Angel?” “Not if you want me to do anything other than leap out of your screen with my fangs bared, no.”

The plot’s not too tricky this time: when the TARDIS lands in 1967, Thirteen heads off to track some weird signals, and ends up with Claire and Professor Jericho (Kevin McNally), who’s running experiments into psychic energy in his basement. Yaz and Dan go in the other direction to look for a missing child, Peggy, who they eventually find in 1901, after they have an unfortunate run-in with an Angel. The Angels take the village out of sync with the rest of time, so there’s no way out. Just the vast nothingness of space. There is a line between 1967 and 1901, which they can look and talk through, but they can’t cross it. In 1901, Lil Peggy sees Grown Up Peggy on the other side of the line, and she tells her[self] that the only way back to 1967 is the long linear way. Not great news for Yaz and Dan.

Thirteen ends up at the boundary line as well, after a long and eerie battle to hold off the hordes of Angels eventually leads her there. Poor Professor Jericho gets tagged by an Angel and pinged to the 1901 side; he watches with Yaz, Dan and Lil Peggy as Thirteen stands surrounded by Angels, who have done some haggling with Rogue Angel behind the scenes, and have decided to re-draft the Doctor into Division rather than Rogue Angel.

That does it. As co-workers go, they are the WORST. I bet they heat fish in the microwave, and chew obnoxiously loudly as well. Ugh.

Although the Doctor worked for Division in her Doctor Ruth form, there’s no way she would go willingly as she is, so it makes some sense that they draft her into service via metamorphosis, but who are we kidding? This was all about the nightmare visual of Thirteen turning into Doctor Angel, and testing my bad joke restraint to its breaking point.

PETRIFIED, YOU SEE? BECAUSE SHE IS SCARED AND TURNING INTO STONE AND IT WORKS ON BOTH LEVELS AND oh I will just get my coat.

Thirteen’s transformation occurs in full view of her horrified friends who are powerless to help her, and are now stuck in 1901 with no route back. The TARDIS is on the 1967 side, plus it is recovering from an emergency reboot at the start of the episode, and let’s not forget, it’s been even wonkier than normal anyway.

Meanwhile, in a galaxy far far away, Vinder hasn’t caught up to Bel yet. He’s not too far behind, following in her footsteps to a mostly deserted planet where he is welcomed by Namaca (Blake Harrison, aka Neil from The Inbetweeners), who Bel saved from Azure. Dusty Disco Sis on a solo mission! I wondered if she was working on a new plan for once, but we don’t have enough evidence for that. She’s just filling up Passenger with lots of desperate hostages, promising transportation to a paradise free from the Flux. I’m assuming she is working on Temple Plan #3 as we speak… The fabulous Bel has seen Passengers before and doesn’t fall for Azure’s sales pitch. She leaves Vinder a video message but was interrupted before she could leave co-ordinates. Doh!

I’m very pleased to bring back the Wibbly-Wobbly Timey-Wimey Stuff section; the Flux season has felt like permanent wibbly-wobbly timey-wimey stuff, which is hard on the nerd brain, I tell you.

Considering all the Who-speak jokes about ‘reversing the polarity’, it hasn’t happened many times in the show. We saw it in ‘Day of the Doctor’, when both Ten and Eleven did it, which reversed the polarity and re-reversed it at the same time. This time, Thirteen uses it to kick the Angel out of the TARDIS. And nerds chuckled.

Amy Pond came down with a case of the Ominous Dusty Eyeballs after staring at a Weeping Angel on the telly in ‘The Time of Angels’.

The Angels were also responsible for the exits of Amy and Rory, so it’s safe to say the Doctor is not a fan.

Sally Sparrow’s BFF had to take the long way round when she was pinged back to the past by Angels in ‘Blink’.

I gave up trying to yarnwall Flux about 15 minutes into episode one, but behold: I have a theory. Azure’s sneaky “come with me if you want to live! Taking you somewhere nice, honest” trick rang a distant [cloister] bell. We’ve seen that trick before, way way back with Ten, Martha and Jack, when the Master helped the last survivors of humanity ‘escape’ the end of the world. Instead of sending them to Utopia, he turned them into flying killing machines and used them to take over Earth. Is it a clue? Is the Master lurking in the wings? Back then, the Master started off trapped in the guise of an adorable nerd academic, Professor Yana; what if fellow adorable nerd academic Professor Jericho is another Master disguise? I kind of hope that last part isn’t true, because Professor Jericho is a delight, but either way, he’s sticking around for the next couple of episodes, so keep an eye on him!

Next week: Space Doggo! Ood! KATE! And seriously, what is up with Mutton Chops Mine Man?

← How Did Kirsten Dunst Become So Underrated? | Will Smith, Please Stop Talking About Your Sex Life →