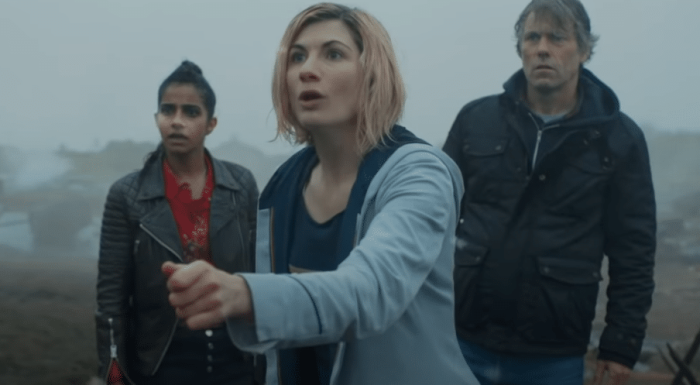 'Doctor Who: Flux' Recap: Attack Of The Killer Potatoes

Previously on Doctor Who: It was a blur, but there was a Space Doggo, Disco Imhotep, folks disintegrating and a big fiery storm in space. And we met Dan! Catch up with my episode one recap here if you missed it.

This week: There’s still plenty of bonkers energy but it’s much more cohesive this time, with a more manageable number of narrative threads to follow. Spoilers are incoming!

After a quick gathering at the Crimean War, Meet Dan and Yaz are mysteriously zapped away, leaving Thirteen to face the oncoming Potato Storm with Mary Seacole (a delight) and General Numpty (not a delight). General Numpty wants to launch an attack, labouring under the delusion that the British army can win anything as long as they are wearing pretty uniforms and form square with sufficient patriotism. Taters to the right of them, taters to the left of them… Taters armed with laser guns and only one weakness: the infamous vent at the back of the neck. Shocker: this doesn’t end well for the Brits.

Horrified and annoyed in equal measure, Thirteen comes up with an Actual Plan: to sabotage the Sontarans’ special air supply and thereby force them to leave Earth. Big Chief Potato is FUMING. Retreat is shame for the Battle Spuds. But he re-frames it as a ‘strategic withdrawal’ and can live with that. For a few moments anyway, before General Numpty blows them all up instead, leaving Thirteen horrified and annoyed in equal measure once more, and disappointed with any human who isn’t Yaz, Meet Dan or Mrs Seacole, who remains a delight. Can she join the crew, please? With Graham gone, we need more zingers like this:

“Hello dear! I don’t understand any of this!”

Meanwhile, Meet Dan was zapped home, where he sees the forlorn gap formerly occupied by his house. There’s no time to wonder about where he’s going to sleep though, because the Sontarans have also taken over modern day Liverpool. Being a Good Egg Everyman, Meet Dan goes to single-handedly save the day with nowt more than a handy wok and his wits. I say his wits, but I really mean a few wok puns and the confidence to mash the keyboard of an alien computer to see what happens. I feel a strange affinity with Meet Dan this week. I once single-handedly attacked a terrifying beast armed with only a frying pan and a sense of self-righteousness; let me tell you, I saved a friend from a really big centipede that day. Totally the same thing. I wish I had stopped to make a pun right afterwards, but we saw what happened to Meet Dan when he did that: more War Potatoes appeared, and if it hadn’t been for the timely arrival of the resplendent, reluctant (even resentful) hero Space Doggo, they would have turned him into crisps.

Space Doggo blows up the Liverpool Sontarans but in a cute GOOD BOY kind of way that is absolutely nothing like what General Numpty did. Nope. Not at all. Thirteen gives him a Hard Stare when she arrives to collect Dan, but he promises to keep an eye on the place while she goes to find Yaz, so he’s cool. Noggin pats for Space Doggo.

Poor Yaz; how many times has she been zapped away to distant and sinister places now? This week, she finds herself in a ruined temple on Planet Time, along with Vinder who was also zapped away from the fiery obliteration headed his way last week. Mr Mutton Chops, the dude from the mines, is also there for a moment. Some Shouty Flying Robot Diamonds demand that the guests repair the main part of the temple, or all hell will break loose. Sorry, all time will break loose. They gamely have a go, but are interrupted by Space Imhotep and his sister, aka Swarm and Azure, the Dusty Disco Twins whose hobbies include wearing elaborate coats to disintegrate people (and Shouty Flying Robot Diamonds) that annoy them. (Imagine the dry cleaning bill they are facing! THE HORROR!) They are also sort of there to repair the temple, but probably not in a good way. By the time Thirteen and Dan arrive, they have made Yaz and Vinder part of the temple and OH LOOK! They do makeovers after all! This one will probably kill Yaz and Vinder though…. Just as the Dusty Disco Twins are about to UNLEASH TIME, the credits roll.

See? Just a few threads to balance this week. But because of the chaos of last week, many questions remain:

What was the creepy vision at the start of the episode?

What is Mr Mutton Chops working on in the mine?

What happened to Diane?

Will any of these questions be answered next week? Who knows! But there will be Cybermen! Baddies assemble!

Honourable mention: Actual LOL for the Big Chief Potato’s reason for picking a fight in the Crimean War: “I wanted to ride a horse”. Now I’m picturing little Baby Spuds playing My Little Pony and daydreaming about playing with real horsies one day…