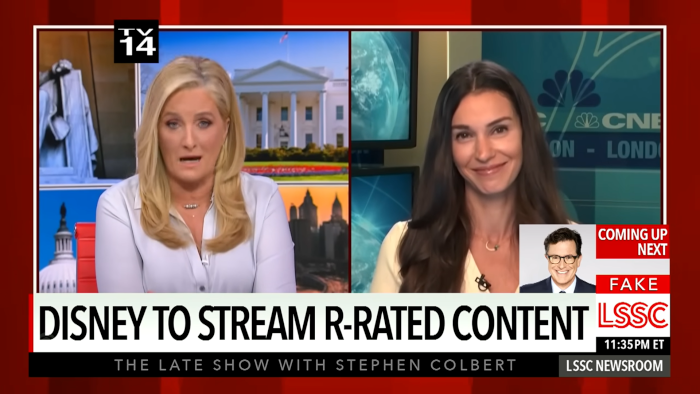 Back in my day (a Thursday), the totality of R-rated Disney content involved looking for hidden penises on VHS covers. Everyone had that friend whose friend had seen it, so it was definitely real. But that was at a time when Disney could only get dirty subliminally. Now, the game has changed. Disney is a media monopoly. It only makes sense that they’d have to start appealing to a more “adult” crowd. Or, in the case of adding Deadpool and Deadpool 2 to Disney+, a teenage crowd.

Yes, Disney added both Deadpools and Logan to its streaming service. All three movies are R-rated and not for kids. Adding them to a service that is predominately kid-friendly has caused a bit of an uproar. It’s silly outrage that comes down to “how well are you monitoring/explaining things to your children?” Luckily, the folks at The Late Show with Stephen Colbert are here to show just how ridiculous all this is.

Colbert kicked off his show with a montage of Disney content adjusted to be R-rated. We’ve got Elsa doing blow, Aladdin offering to show off his junk, and Randy Newman singing about f*** buddies. Coincidentally, these are all jokes that will likely end up in the third Deadpool movie.

What makes the sketch even funnier is the opening news report about the subject. One reporter laments that Disney+ has so far only featured PG content. That is just not true. Kids have been one click away from a PG-13 Marvel movie since Disney+’s inception. They’ve been moments away from seeing just why Revenge of the Sith was the first PG-13 Star Wars movie. This adult anchor’s confusion illustrates both why this outrage is dumb and why Disney is trying to attract more adults in the first place.

Disney has expanded and evolved from what it used to be. Technically there is already plenty of R-rated “Disney” content on Hulu. But what would outrage like this be if it wasn’t at least slightly misinformed? Disney may change, but overprotective parents never will.

← The DOJ Is Officially Investigating Donald Trump; Can It Secure a Conviction? | JoJo Siwa and 'Rude' Candace Cameron's Feud Is Over, Was Dumb →