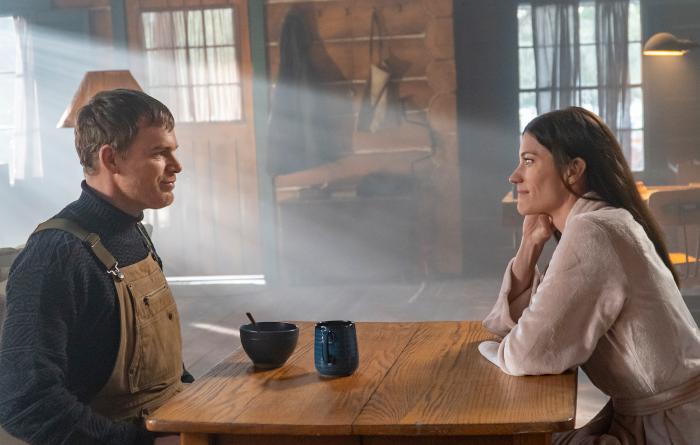 'Dexter' Is Back, and So Is Some of that Early Season Magic

Showtime’s Dexter is back, and in the premiere episode anyway, so is the addictive energy that characterized the early seasons of the series. The series’ original showrunner, Clyde Phillips — who left after the fourth season — has also returned, and he seems intent on correcting a very bad wrong (not just the lousy final season of Dexter, but seasons five through seven, as well).

It’s been nearly a decade since the events of the finale, which saw Dexter sail into the eye of a hurricane, somehow survive, and relocate to the northwest where he worked as a lumberjack. Now he lives in a small, cheery town in Upstate New York where he works behind the counter at Fred’s Fish and Game store and goes by the name of Jim Lindsay. Dexter has a good, simple life. He’s romantically involved with a local cop, Angela Bishop (Julia Jones), a single mother with a teenage daughter. He enjoys his job. Everyone in town knows and likes him. In the decade since we last saw him, Dexter has fallen into a comfortable routine, and it’s that routine that’s kept him from killing anyone since he left Miami.

It doesn’t take long for things to fall apart.

As Iron Lake fills up with rich assholes returning to their second homes for the winter, Dexter is confronted by Matt (Steve M. Robertson), a young Wall Street douchebag who wants to buy the biggest gun in the store because that’s the kind of guy he is. When he doesn’t immediately pass the background check, Matt razzes Dexter to look the other way and live a little. Dexter, however, is by the book. The next morning after Matt passes the background check, Dexter delivers the gun to his home, where Matt is still partying from the night before. Dexter finds out from Matt’s “best friend,” Teddy (David Magidoff) — whose loose lips have been greased by cocaine — that Matt was responsible for a drunken boating accident that resulted in the death of five people. Matt, however, paid off Teddy to testify to the effect that Matt wasn’t driving the boat because rich sh*ts get away with everything.

Except those who encounter Dexter. Dexter manages to restrain himself in the short term — thanks in part to his new Dark Passenger, the admonishing Debra (Jennifer Carpenter) — but when Dexter encounters a beautiful white stag he’s been admiring every morning, things go to hell. Matt shoots the deer from afar while Dexter is trying to befriend it up close. The deer’s blood splatters on Dexter’s face, and his thirst is awakened.

Matt doesn’t stand a chance. Dexter knocks him out and takes him to a make-shift kill room on Dexter’s property and plunges a knife into his chest after Matt confesses to killing those five people on the boat. He also threatens that his father — the mayor of Iron Lake — will track Dexter down and destroy him. Dexter is unfazed. Matt, meanwhile, ends up in pieces and tossed into an ice fishing hole in the lake.

Dexter is back. It’s weird how much I missed him.

There is, however, some other business. Throughout the episode, Dexter can’t escape the feeling that he’s being watched, and he soon discovers that his son Harrison — now a teenager — is in town. When Harrison confronts Dexter at his home, he initially begs off and tells Harrison he’s got the wrong guy. However, before he kills Matt, Matt explains that he’s an asshole because he has an asshole for a father, and Dexter realizes that he wants to do for Harrison what his adopted father, Harry, did for him: Give him a code. Dexter tracks Harrison down at the bus station and brings him home.

What could go wrong?

— Even as a ghost, the chemistry between Jennifer Carpenter and Michael C. Hall quickly returns. She’s much better as a Dark Passenger than she was in the last few seasons of Dexter where she was otherwise insufferable much of the time.

— There’s a series of missing women in town, unsolved cases that there’s no funding to investigate because no bodies have turned up. Obviously, that’s another potential victim for Dexter.

— We haven’t been introduced to her yet, but Jamie Chung has also been cast in this season as Molly Park, the host of a true-crime podcast. Clancy Brown will also show up as the mayor of Iron Lake and the father of the deceased Matt.

— Speaking of Matt, Dexter has evolved, choosing not to keep a trophy (a blood slide) with this kill.

— Hannah (Yvonne Strahovski) is mentioned but never seen. It’s unclear if she will come for Harrison at some point this season. I hope not. It’s not a complication this season needs. Also, I really like Angela, and Dexter doesn’t have a history of likable girlfriends.

— I love the small-town winter setting. It feels more natural to a serial killer drama than sunny Miami.