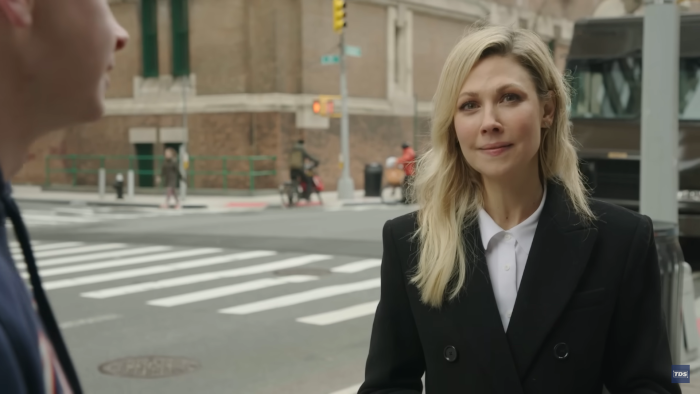 George Santos is the first person I have ever seen lie too much for politics. That’s a high bar. Lying constantly happens in the political sphere. We had a President who lied like it was his job. Even politicians you like can get caught in lies now and again. Yet, NY Rep George Santos managed to lie so much and so poorly that even an aide in his office thinks it will end with him in cuffs. Are we wrong to judge Santos for lying to get a job? Don’t all New Yorkers do that? Desi Lydic hit the streets for The Daily Show to find out.

(Just in case you’re wondering, I’m barely going to talk about George Santos here. He is a stupid liar who needs to resign. This is mostly a Desi Lydic appreciation article. Thank you for understanding.)

I’ll mention right off the bat that Lydic has been rumored to be in the running to host The Daily Show. There are many good reasons for that. She can play funny, she can play straight, and she can mix it up with the people. She has everything that the job requires. I think she’d be a great choice to replace Trevor. We all know that Paramount+ reads my articles regularly so my words hold a lot of sway.

This bit has all the humor and surprise you want from a “people on the street” sketch. People are so strange when they get in front of a camera. I don’t know if it’s nerves or excitement or both, but people will admit to and say the weirdest stuff. Desi handles it all with aplomb. It’s not even like she’s asking them anything crazy or weird, just if they lied on their resumes. Her reactions to what they say take a funny idea and bring it to the next level.

More Desi Lydic, please! Competition for the hosting gig is stiff, but something tells me it might be Desi’s time.


← George Santos Staffer: He's 'Going To Be Perp Walked' | The Golden Globes Did Everything Right, Except Attract Viewers →