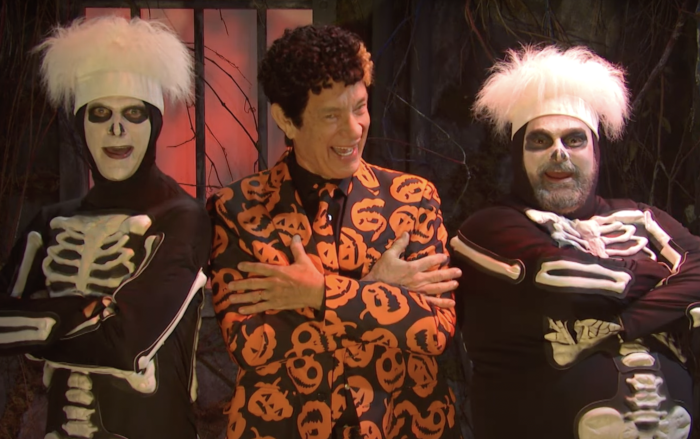 Cold Open — “PBS Newshour” has decided to make us extra anxious by reminding us that Republicans are surging ahead of the midterms, and then show us why: Dr. Oz, Hershel Walker, and Kari Lake. Cecily Strong is also back and perfect as Kari Lake, who I hope she never has to play again.

Honestly, Democrats are losing to these people? “I could pay for an abortion in the middle of Fifth Avenue and not lose a vote,” Kenan as Herschel jokes. AND HE’S RIGHT. Look: Republicans vote for Republicans. Democrats vote for Democrats. But why would an Independent vote for Herschel Walker? It makes no sense. Whatever. This sketch is fine, even though not even Kenan can parody Herschel Walker. We’re so screwed. Bring out David Pumpkins. (Watch Here) (Score: 5 out of 10)

Halloween Wedding — The bride decides that maybe she doesn’t want to marry her groom because his best man (Tim Robinson) is dressed like The Joker. The attendees debate whether the best man should be allowed to continue being the Joker. It’s a stupid sketch, except that Jeff Probst makes an unexpected cameo, which somehow makes it more stupid, which almost makes it work. I like that SNL is embracing absurdity, which may seem counterintuitive given how much I hated Kyle Mooney. (Score: 6 out of 10)

Skechers — A Sketchers ad where they promote themselves as the company that rejected Kanye, but also, “Isn’t it cool that Kanye came to us? Look how cool we are! Crocs didn’t turn down Kanye! We did!” (Watch Here) (Score: 5.5 out of 10)

Post-Halloween Red Carpet Show — A couple of newscasters interview drunken folks after their Halloween nights. “Frat Guy Dressed as a Giant Tampon,” “Guy Who Really Wants You To Ask Him What His Costume Is,” “Guy who was in a group costume but lost his friends,” “Impossible Drunk Dora the Explorer,” who only says one thing over and over, “Tom Brady.” A lot of inspired jokes here. (Score: 7.5 out of 10)

AA Meeting — Jack Harlow’s character, when asked if he wants to share during an AA meeting, shares that he has a great idea for a Pixar movie, and the rest of the attendees get into the action. It’s a good sketch that Cecily Strong makes even better, and then Tom Hanks shows up and turns the sketch into a (Score: 7.5 out of 10)

Horror Movie Trailer — The horror here? “Biden’s plan to run for reelection in 2024.” It’s funny because it is … horrifyingly perfect. This may be the sketch of the season, so far. Damnit. The Bernie twist also makes it the Mat sketch of (the year). (Score: 9 out of 10)

Bad Cocktail — Harlow and Yang play waiters who make drinks at the table, say “cock” a lot, and spill drinks all over each other. There was some promise here, but it goes off the rails. (Watch Here) (Score: 4.5 out of 10)

Weekend Update — Elon, Fetterman/Oz, and a lot of Kanye jokes. So many Kanye jokes. And then Drunk Uncle makes an appearance! Drunk Uncle! Listen: Every time Bobby Moynihan shows up, 1/3 of viewers confuse him for Horatio Sanz and yell about how problematic he is. There’s nothing problematic about Bobby Moynihan! In fact, Moynihan is so good as Drunk Uncle that another 1/3 of viewers will have forgotten that he left the show five years ago. (Score: 8 out of 10)

The View — Remember when climate change protestors interrupted The View when Ted Cruz came on? That’s the topic of the conversation here, plus Jack Harlow relentlessly flirts with Whoopi. Harlow’s got charm enough to salvage a bad sketch. (Watch here) (Score: 4.5 out of 10)