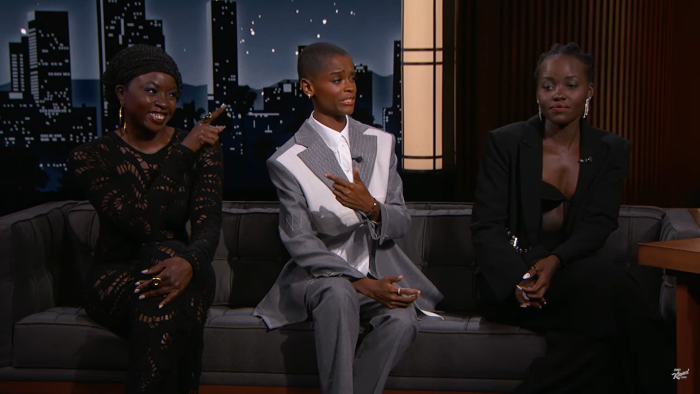 Last night, Black Panther: Wakanda Forever had its world premiere. Anticipation for the long-awaited sequel to the hit Marvel film is palpable. But, before Lupita Nyong’o, Danai Gurira, and Letitia Wright could mix it up on the red carpet, they had to drop by Jimmy Kimmel: Live to be pressured for spoilers. In a fun way.

Let me say that I won’t be diving into Letitia Wright’s public troubles here. You can read all about them as laid out by our own Brian Richards here and here. What I will say is that early on Gurira suggests that Wright has “been through Marvel media training” and I laughed pretty hard.

Their interview with Kimmel was all about the new movie. He did playfully try to ply them for information, but it was all in good fun. At the end of the day, you can’t not have fun with three people who are this charismatic. Nyong’o, Gurira, and Wright are fun, friendly, and quick-witted. Everything you would want from three movie stars. I know I’ve brought it up here before, but some celebrities are just not equipped to be themselves and have fun. That is not the case here.

It likely helps that they are promoting a project they feel passionate about. You can tell in the way they speak about the film, about making it, that it meant a lot to them. That passion was more than apparent onscreen in the first Black Panther film, and I feel confident in thinking that will be the case for Wakanda Forever as well.

While they don’t spend too much time discussing him, Chadwick Boseman is remembered fondly by his former castmates. I can only imagine the emotional toll that returning to set without him must have brought. My guess is we will see their reactions onscreen as well. With these three (and many others) carrying the franchise forward, at least his legacy is in good hands.


← Is that Lyle Lovett and Darius Rucker Joining ABC's 'Big Sky'? | 'Barbarian' Is a Flawed but Audaciously Unexpected Horror Film →