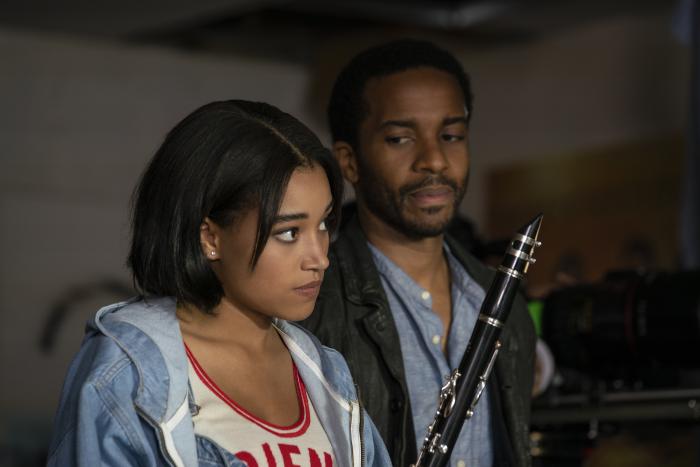 It wasn’t that long ago that Netflix cancelled its musical drama Soundtrack and it looks like the series is being replaced by yet another musical series called The Eddy. But there’ll be no lip synching here! In fact, the series is being directed by La La Land director Damien Chazelle, Emmy Award winner Alon Poul, Houda Benyamina, and Laila Marrakchi. That is quite the diverse director’s list, so consider me intrigued.

The eight-episode series is set in Paris and stars André Holland (Moonlight, Castle Rock, AHS) as Elliot Udo, a former jazz pianist who’s now the struggling co-owner of The Eddy. He also manages the club’s band, led by singer and sometimes girlfriend Maja (Joanna Kulig). The drama really kicks in when Elliot’s daughter (Amandla Stenberg) moves to Paris to live with him. On top of that, Elliot’s business partner, Farid (Tahar Rahim), might be up to no good, much to the chagrin of his wife Amira (Laila Bekhti), who didn’t know what he’d been up to before.

I don’t know about you, but the fact that the Netflix series includes several French-Algerian actors is a-mazing! And they’re a part of a musical series, which is even more incredible! On top of all that, the songs were penned by six-time Grammy Award winner Glen Ballard, who is best known for co-writing and producing Alanis Morisette’s 1995 album Jagged Little Pill. Sign me up right now!!!

For now, you can watch the trailer for The Eddy below!

The trailer doesn’t tell us much, but if you enjoy watching the back of André Holland’s head as he walks down the street, then this trailer is for you. The Eddy, which “conveys the power of music to heal, unite and turn chaos into beauty,” is set to premiere on Netflix on May 8.