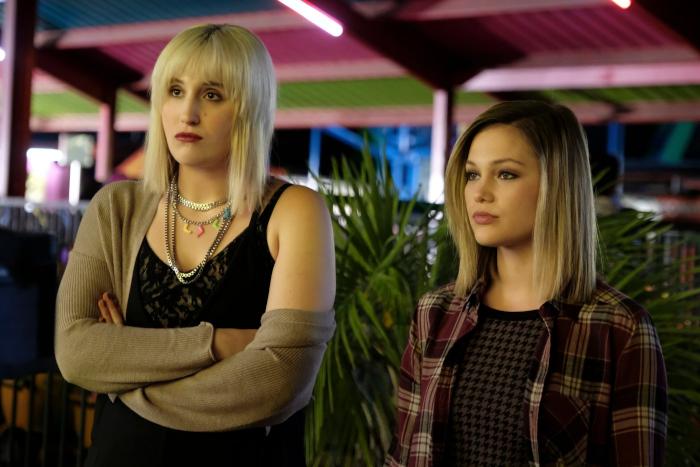 'Cruel Summer' Ending Explained: It Was a Simple Misunderstanding (Sort Of)

For all the time-shifting tricks and nefarious suggestions during the first nine episodes of Freeform’s hit new series, Cruel Summer, the finale ultimately came down to … a simple misunderstanding (sort of). Had someone simply put Jeanette Turner and Kate Wallis in a room to talk it out for 10 minutes in the premiere episode, maybe they’d have resolved their differences and avoided the lawsuit from the beginning. That’s not to say that the finale was anticlimactic or even underwhelming. It’s just that a simple phone call could have saved Jeanette and Kate from a lot of drama and heartache.

The crux of the episode took place in October 1995 in the home of Martin Harris, where Kate asked to meet with Jeanette after Jeanette used the private chats, obtained from her brother, in her lawsuit against Kate to prove that she was lying. After a conversation with her lawyer, Kate realizes that Jeanette has her dead-to-rights because Kate admitted in those private chats that she entered into Martin Harris’s home willingly, contradicting her earlier account that he had drugged and kidnapped her.

During the conversation, both Jeanette and Kate put all their cards on the table. Jeanette admits that she broke into Martin Harris’s home on Christmas Eve 1993 and stole his snow globe, but insists that she did not see Kate hiding upstairs. After conceding that she had a relationship with Harris, Kate insists that she saw Jeanette see her through the window as Jeanette was leaving Martin’s home, before riding off on her bicycle. However, when Kate describes the bicycle, Jeanette realizes that Kate didn’t see her. She saw … Mallory, who had arrived to confront Jeanette about breaking into the Harris home again. An angry Jeanette admitted as much to Mallory at the time and forced the snowglobe onto her, which is how it came into Mallory’s possession.

That misunderstanding out of the way, Jeanette and Kate come to a sort of truce. Jeanette even admits that, while she did not want to steal Kate’s life, she did want to feel as popular and beloved as Kate. Friends now, Kate also asks Jeanette to return to Martin’s basement with her in the hopes that she can recall the mysterious “Annabelle” referred to in her journals but repressed by her memory.

A trip to the basement does, in fact, help Kate recollect her final moments in captivity. Back in 1994, Martin came down with a gun that he called “Annabelle” and contemplated using it to kill himself. However, Martin couldn’t follow through on it, dropped the gun, and flipped the hell out. Kate picked up the gun and eventually used it to shoot and kill Martin. She stayed with Martin’s body overnight before calling the police.

The next 1995 day, Kate concedes to the press that she was wrong about Jeanette, who was also a victim, and apologized. Jeanette, meanwhile, drops the suit against Kate. Later, Kate confronts Mallory, knowing now that it was Mallory and not Jeanette who spied her through the window. You’d think that she’d be furious with her. She is not. Mallory concedes that she saw someone through the window that Christmas Eve night, but since Kate was not in the basement, Mallory assumed it was Harris’s girlfriend. Mallory never even considered that it might have been Kate until after Kate resurfaced. Kate forgives Mallory, and they remain best friends (and a kiss later while they’re happily dancing suggests possibly more).

Meanwhile, Jeanette goes on television (dressed very Kate-like) and tells her story, publicly forgives Kate, and finally feels the love she has always craved. Everyone gets a happy ending, right? (Even Vince and Ben, who reconcile earlier in the episode after Jamie encourages Ben to reach out to Vince, get their happy ending).

Yes, but there is a “shocking” postscript to the story. In a flashback to 1994, we see Jeanette during another trip inside of Martin Harris’s home, and this time, she does hear Kate in the basement, calling out for help. Jeanette, however, ignores her pleas.

In other words, Jeanette did hear that Kate was in the basement, and she did opt against calling the authorities. It just wasn’t the time that Kate initially thought it was. Jeanette was the villain all along, but that secret remains safe within Jeanette’s mind. For now. Because Cruel Summer was renewed for a second season yesterday. It remains to be seen whether Jeanette’s last visit to Harris’s home plays into the next season.