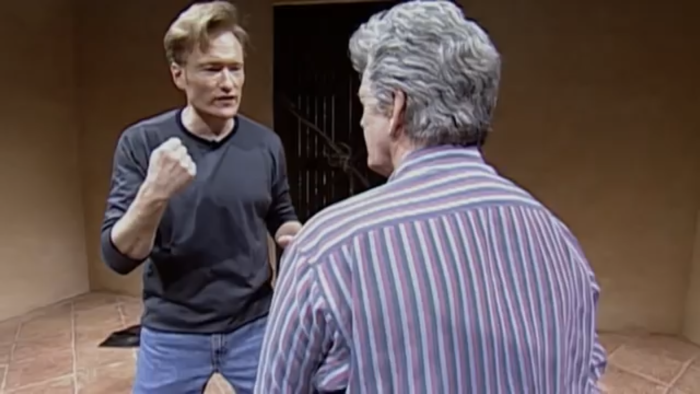 Conan O’Brien Wants To Be An Action Star, Let’s Make That Happen

You no longer need to be in shape when you’re up for an action movie! I’m not addressing you specifically (or maybe I am, I don’t know who’s reading this). No, I am addressing pretty much any actor in Hollywood (and any adjacent, big-budget movie-making areas). The most recent example is Bob Odenkirk and his action-star turn in the film Nobody. Odenkirk says he trained for almost two years to get in shape for the film and that inspired an old friend of his: Conan O’Brien.

“What Bob has done, for people like me is, he’s opened a door,” O’Brien said on the newest episode of his podcast, Conan O’Brien Needs A Friend. Let’s be honest, he’s totally right! Why NOT Conan?! He’s got the height, the reach, the… other distinct features!

Conan goes on to pitch a more satirical version of what the movie might be but I’m serious! Conan could easily fit in any of the big superhero universes. Why stop there?? A new Fast and Furious trailer just dropped. Imagine, if you will, Vin Diesel squaring off with Conan, both in formal white tank tops! The dream!

Perhaps we can start a petition? Everyone has one these days. We just have to get loud and insistent and we can get a John Wick meets Fast and Furious-style, in space maybe(?) action movie! With Conan O’Brien as the star!

Until that beautiful dream becomes a reality, all I have is my imagination… but it is STRONG.