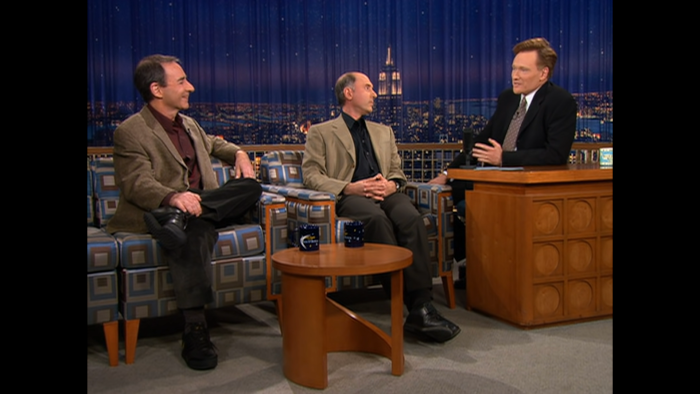 Conan O'Brien Just Re-Released One Of His Best Interviews

When I was around ten years old, I started recording episodes of The Simpsons off of my TV and onto a VHS. It was a big revelation for me. I was a huge The Simpsons fan but was often at the mercy of FOX’s scheduled reruns. What if I wanted to watch the show on my own time? There were VHS collections, but they were pricey and often only had a small handful of episodes. I would record every episode of The Simpsons I could, as well as anything Simpsons-related. That leads me to this Conan O’Brien interview.

I loved The Simpsons, and I also loved Conan O’Brien. About twenty years ago (shudder), I saw that Dan Castellaneta and Harry Shearer would be appearing on Conan’s show. At that same time, Comedy Central had started running reruns of Conan’s show at seven PM every night. I could watch Conan without staying up past my bedtime! I got to see this interview and record it on my VHS tape. Once I had it, I watched it over and over again.

I had never seen actors from The Simpsons talk like this before. They were doing voices that I loved, of course. They were also just being funny people. I’d even go so far as to say they seemed normal. As a child who had started doing theater at school, I now saw a career entertaining people as something attainable. This interview changed my life.

There is some bias in this write-up. This is one of Conan’s best interviews for me. It came at a formative time in my life that I remember fondly. It was also a time in my life that would soon change when every season of The Simpsons started getting rolled out on DVD shortly after. I look upon it fondly, as a little time capsule. A lot has changed in 20 years (like Harry Shearer not voicing Dr. Hibbert anymore). But a lot has stayed the same. I still love The Simpsons, I still love Conan O’Brien, and I still love this interview.


← To the Laughter of His Co-Hosts, A Dutch Soccer Pundit Admitted on TV to Sexually Assaulting an Unconscious Woman | One Surprising Detail Surfaced About Melissa McBride's Departure from 'The Walking Dead' Universe →