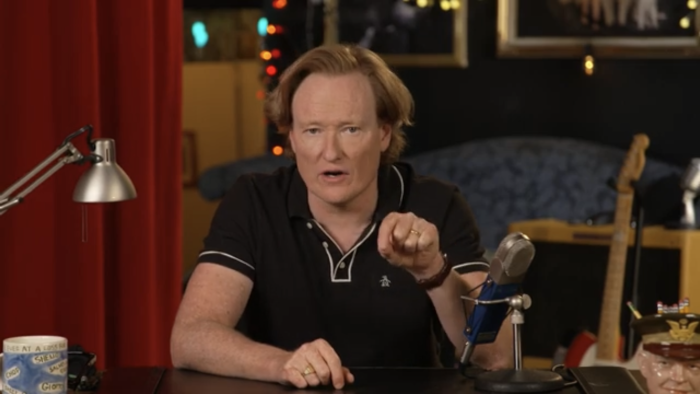 Conan O’Brien Is Reaching Out To Swing States

Conan O’Brien is not the most political of the late-night hosts. While not avoiding it entirely, it’s not a well he’ll go to too often. He once discussed this topic at length in an interview with Esquire where he said, “We do political comedy, but it’s on our terms and it’s very silly. I try to find the silly in it and let people make up their own minds.”

And ya know what? It works. I believe that, due to the scarcity of his politically bent humor, Conan is able to land the occasional political jab without it being repetitive or stale. Hopefully, this also allows him to reach people who may not be interested in hearing such things from your standard late-night host.

Which brings me to Conan’s latest political bits.

Starting this week, Conan has been releasing PSAs aimed at specific swing states. The short minute to minute-and-a-half segments (so far created for Florida and Arizona) feature hyper-specific bits about the states he’s addressing, all the while encouraging them to register to vote by October 5th. In true Conan fashion, they mix dry wit with overt silliness and are all topped off by his truly out of control pandemic hairstyle that makes him look like the bass player in an all dads garage band.

Despite the silliness, the bits come across as very sincere and therefore (ideally) more impactful. He’s not telling anyone to vote for any particular candidate, he’s just telling people to vote. To get involved. As he’s said before, he wants people to “make up their own minds.” It’s an inspiring thing to witness and I’m excited to see which swing state he reaches out to next! If anything, I’m bummed he won’t be doing one about New York so I can get more of the references. But hey, New York is a swing state, right? Right?! … Sorry. To quote Stanley Hudson, “Sometimes I say crazy things.”