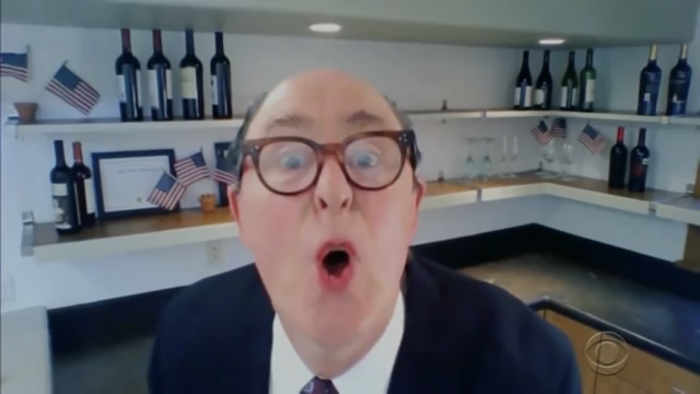 Any time I think “no more writing about Trump or any of those other clowns” the universe smacks in the face with reality. The election may be several times over but even with the lights on, the roaches just aren’t scurrying away. If anything, they’re arguing that nobody wanted the lights turned on to begin with.

But there is a silver lining! Late-night hosts have been on fire when it comes to mocking Trump’s current downfalls. Part of that hot streak is the latest person to play Rudy Giuliani on Colbert’s Late Show: John Lithgow. Holy hell, y’all! He NAILS it!

My first thought when seeing that someone was playing Giuliani on Colbert was “do we need this?” The answer, it turns out, is yes. I really enjoy Kate McKinnon’s more over the top impersonation of the former mayor turned melting insanity-prune. It’s batshit crazy and so is he. But Lithgow’s is slightly more grounded (as absurd as that sounds) and feels shockingly real. The things he’s saying are insane, but that’s the truth for the real Rudy too.

There’s also something to be said for Lithgow having no crowd to feed off of. He’s able to capture Giuliani’s manic claims with such high energy despite being, essentially, alone in a room. It’s really impressive to watch.

As tired as I may be of hearing about the Trump team and their nonsense, this is an easier pill to swallow. Of course, I can’t keep my head under the sand, but I’m exhausted by certain people being thrown in my face all the time. But if those people are presented via a wine-soaked John Lithgow? Sign me up.