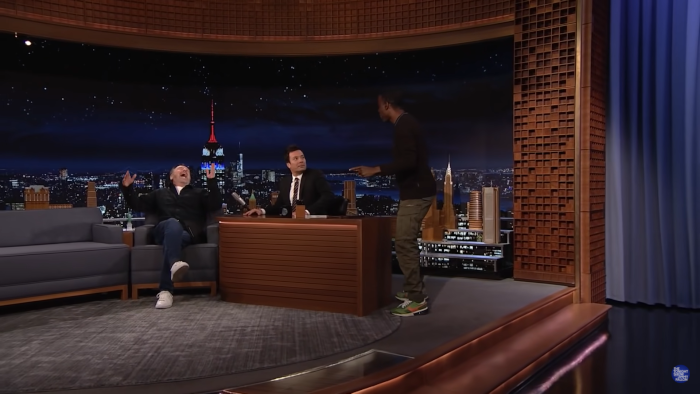 I have loved watching Colin Quinn’s career change over the years. The comedian and former “Weekend Update” anchor has shifted to a more educational style of comedy. His one-man shows have turned into history lessons couched in comedy. I can’t recommend them enough. However, you can’t leave your SNL days too far behind you. Quinn appeared on The Tonight Show with Jimmy Fallon and Chris Rock showed up for some support!

Right off the bat, I loved how this felt like an old-school talk show moment, like friends just having a laugh. If I had to guess, Rock was backstage with no plans of coming out and just did it. No particular reason. It didn’t even seem like a huge surprise to Quinn and Fallon, just Chris Rock being Chris Rock. He comes out, makes an odd joke about vaccines, and moves on. It makes the comedy community feel … like a community.

My favorite part, though, is Quinn’s response. He already lamented the fact that he had to follow Taylor Swift. After Rock leaves he’s not talking about how great he is or how they’re friends. He cracks a joke about Fallon wanting to bring out more famous people to overshadow his interview. Quinn knows he doesn’t have the same fame as Chris Rock, so he plays to that.

Colin Quinn is fun to watch and has come a long way. I distinctly remember a time when he was on Conan in the early 2000s and was much too drunk. Now, he’s happy, healthy, and about to travel the country teaching history through comedy. Who saw that coming??