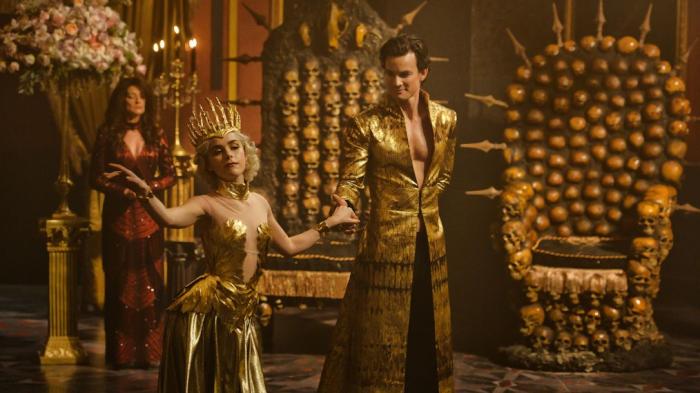 At the end of Chilling Adventures of Sabrina Season 2, the teenage witch announced, quite confidently, that she would be going to Hell to rescue boyfriend Nicholas Scratch. That’s more complicated than it sounds, though, since Nicholas is now playing human host to Lucifer himself. But, the Netflix series is nothing if not inventive and has cast Sam Corlett to play Caliban, the Prince of Hell. He’s not there to help Sabrina save Nick, though. Sounds about right on this show.

Sabrina, along with her mortal friends, who… call themselves “The Fright Club,” will help her get Nick back. The catch is that Sabrina has to temporarily become the Queen of Hell after the Dark Lord’s defeat to challenge Prince Caliban to the rights to the throne. Lucifer was revealed to be Sabrina’s father, so that would then make Caliban, at the very least, her half-brother, right?

Unfortunately, that’s not the case. Caliban is described as having been created from clay from the City of Pandemonium and sparks will be flying between him and Sabrina. Why am I not surprised? And here I thought this show would go a season investing in only one romantic relationship for Sabrina, but alas. A half-brother might’ve been more fun, too. The show’s only introduced Sabrina’s aunt Zelda, Hilda, and cousin Ambrose as members of her family so far, so Prince Caliban could’ve shaken things up a bit on dear old dad’s side of the family. Guess that’s not how bloodlines work on the show (they’re pretty twisted already).

Per Deadline, Chilling Adventures of Sabrina has cast two other characters: Skye P. Marshall as voodoo priestess Mambo Marie, who helps Prudence and Ambrose track down Father Blackwood, and Jonathan Whitesell as Robin, a member of a traveling carnival that sets its eyes on Greendale.

Season 3 of Chilling Adventures of Sabrina will premiere January 24, 2020 on Netflix.

← 5 Shows After Dark: 'A Christmas Carol' on FX, 'Temptation Island' on USA | Just In Time For The Holidays, It's Pajiba's Favorite Charities →