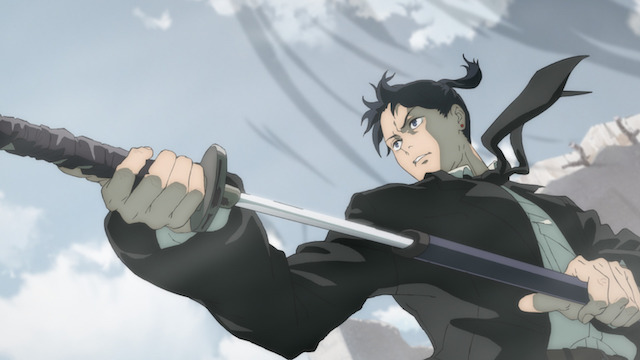 Bold, bloody, and bursting at the seams with combustible and frantic energy, Chainsaw Man made its anticipated premiere on Crunchyroll, and it is a violently addictive anime.

Based on the Shōnen Jump+ series from Tatsuki Fujimoto, Chainsaw Man is poised to be the big crossover anime of the year, following in the footsteps of fellow brutalist series such as Demon Slayer, Jujutsu Kaisen, and Attack on Titan — the latter two of which share the same studio with Chainsaw Man. Wasting little time and having faith in the audience watching to keep pace, the story begins in a world where Devils are born from human fears. While they’re usually dangerous, humans can form contracts with them to use their power, and there are individuals specializing in hunting and employing them called Devil Hunters.

Episode one manages to tease viewers of the mayhem and bloodshed that lay ahead. We’re introduced to our leading character, Denji, an impoverished young man who is trying to pay off his deceased father’s debt to the yakuza. He is desperate to make ends meet, have a normal breakfast with his devil, and maybe meet a girl. His goals, however simple, are threatened immediately as the men he works for as a Devil Hunter turns on him. Seemingly dead, he comes back to life through the sacrifice of Pochita, first met as a dog-shaped creature, the Chainsaw Devil. He merges with Denji and becomes his heart, forging a contract with Denji. Denji gets to live his normal life and, in return, he can transform into the devil-human hybrid, Chainsaw Man, by pulling the cord on his chest.

The end of the episode teases his further politicized descent as he joins an organization as a Public Safety Devil Hunter. For now though, a breather on the plot.

This is a lot of lore to pack into a single episode, but any excess of plotty weight is alleviated by the fact that Denji (and Pochita) are the only main characters we’ve met so far. We aren’t splitting our time with multiple characters while the world and the generalized rules of it are explained. We spend practically all our time in this episode making the show’s most necessary connection to Denji, a seemingly well-meaning if dimwitted protagonist (got to add to the strong, nice guy, big doofus club) with a tragic backstory. A victim of brutal circumstance, this is a story that, like so many good protagonists, is compelling because of the innate unfairness of it all. The fact that his shining moment of triumph here is to just barely cheat death by becoming a devil hybrid where the blade of a chainsaw rips forth from his face? Miserable!

Still, the tone manages to stray far enough from explicit nihilism — it’s too playful for that — but the series will waste little time in devouring that darkness. That playfulness mixed with the foreboding suggestion of doom is further amplified by an assertive and taut score from composer Kensuke Ushio (A Silent Voice) and dizzying direction.

The premiere, which manages to set up the grizzly display of talent on board with its kinetic flow, is a phenomenal display of movement in animation. Series directors Ryū Nakayama and Makoto Nakazono (both animators for Jujutsu Kaisen) have demonstrated a compelling introduction to a scene that’s only going to grow direr as time passes. The two of them along with writer Hiroshi Seko (Mob Psycho 100, Jujutsu Kaisen, Dorohedoro) have masterfully woven a premiere episode that both points us in the direction of what’s to come while maintaining a sense of a singular, contained story that’s meant to be more than simply set up.

Bone breaking, skin tearing, pulverizing carnage: this is, I suppose, your warning if this isn’t your thing. It isn’t always mine either! That said, Chainsaw Man’s glorious chaos, where panels of the manga are, at times, indecipherable for how the stylized blood splatters the page, is poised to become a gripping, edge of your seat must-watch, one worth stomaching through the gorier moments. It’s madness, but also a story of wandering souls in a deteriorating world where the best option to survive is to fight daily, literally, for small comforts. The violence is excessive, but it’s appropriate for the world we’ve been dropped into.

One of its best out-of-the-gate assets is how it refuses to pull punches or shield viewers from the horror this world houses and, often, emboldens.

Of course, it’s the artistry we bear witness to that is its greatest accomplishment. The dynamic action sequences are so skillfully done and so gracefully executed that it’s easy to dismiss a severed limb flying off of the frame. It’s less distraction and more demonstrative of an eagerness to show off all that the artists on board can do — and that’s quite a lot and, again, we’re just the very start of the series. There will be more action and tragedy and humor — it’s a much funnier read than one might expect. There will be the animation, its fluidity, and impact as Denji races across the warehouse floors, launches himself into the air, and momentarily flies before locking onto his target, the screen drenched in red seconds later.

It’s a triumphant feat for all involved. Now we’ll all need to exercise patience in waiting for new episodes each week.


← 'The Good Fight' Provides a Good Reminder to Join the Bone Marrow Registry | 'Walker: Independence' Starts Strong, But Doesn't Have the Legs →