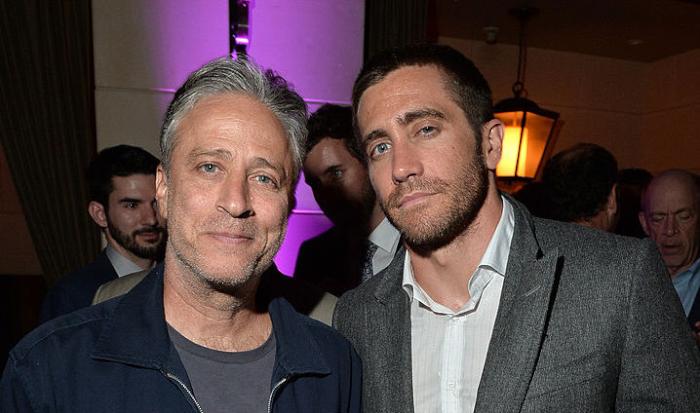 Casting and Industry News: Jon Stewart, Jeopardy!, Stinky Gyllenhaal, and 'You' (No, Not You. 'You')

I love Jon Stewart, but the last movie he directed was both-sides garbage, the first teaser for his upcoming Apple TV+ series was not promising, and he broke my heart with that Wuhan conspiracy theory bullsh*t. I worry that returning to television will tarnish the man’s reputation even further. Do we really want a reach-across-the-aisle guy now? But then again, Joe Biden is the President and he’s doing OK (or was doing OK), so what do I know?

Here’s the latest The Problem with Jon Stewart teaser, which is an improvement over the last one in that at least it’s sort of funny. The series will debut on Apple TV+ on September 30th.

Speaking of reach-across-the-aisle guys, Chris Evans — who has a website in which folks from both sides of a political issue debate it, regardless of whether there is merit to that other side — is reteaming with the highest-paid Asian actress in the United States, Scarlett Johansson, for a “high-concept romantic action-adventure.” The movie, in the vein of Romancing the Stone, is called Ghosted and will come from director Dexter Fletcher (Rocketman) and Rhett Reese and Paul Wernick, the writers behind Deadpool and Zombieland. It’s funny how often we see movies trying to emulate Romancing the Stone, and yet none manage it. Also, it’s weird Romancing the Stone hasn’t been rebooted yet.

The third season of You will finally debut on Netflix on October 15th, and now there’s a baby for Joe to pass along those serial killer genes to. His name is Henry. All of this feels vaguely Dexter-like, especially as Dexter’s son, Harrison, joins the Showtime reboot as an adult in November.

In Jeopardy! news, the WSJ reports that Ken Jennings — the guy most folks would have rolled their eyes and settled with had he not had a history of bad tweets — was indeed knocked out of the running because of those tweets, specifically the one where he said there is “nothing sadder than a hot person in a wheelchair.” After those came out, Jennings lost a lot of love from focus groups, which created an opening for Mike Richards.

Finally, here’s the trailer for Stinky Gyllenhaal’s The Guilty, which will premiere in select theaters before debuting on Netflix on October 1st. There’s no footage here, so don’t get your hopes up. The flick comes from Antoine Fuqua (Training Day) and Nic Pizzolatto (True Detective), who handled screenwriting duties. With those guys, this could go either way.

← What's Up with all the Weird Class Imagery in This Week's 'The Walking Dead'? | 'He's All That,' Addison Rae, and Turning TikTok Stars Into 'Real Celebrities' →