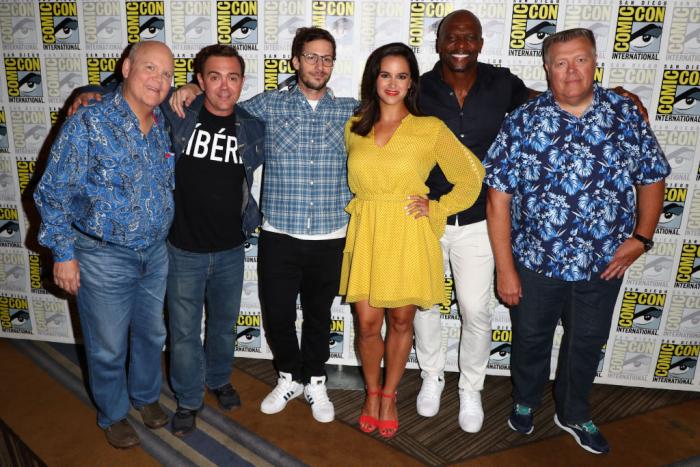 Brooklyn Nine-Nine’s final season hasn’t even started yet and we already know it won’t last as long as you want it to.* NBC has announced a start date of August 12, and every following Thursday will bring two new episodes. If math’s not your strong suit, that means it’ll only be around for five weeks. Things were off to a rocky start when season eight production was delayed due to Covid-19, and again after writers donated $100,000 to the National Bail Fund Network to support protestors.

The show remained popular through its run, though it dropped two million viewers over the last seven seasons. It’s no doubt difficult to keep a sitcom relevant when its protagonists are members of an organization with such a bad civil rights record, in an age where their abuses are instant headlines. Stars Melissa Fumero, Stephanie Beatriz, Terry Cruz, and Andy Samberg are all outspoken on issues of social justice, but even as the show embraced LGBT characters and tackled racial profiling it still relied on blatant entrapment and illegal searches to resolve multiple plotlines. It also probably doesn’t help that Terry Crews has put his foot in his mouth so many times it’s a miracle he doesn’t have Aphthovirus. Melissa Fumero has promised “really satisfying ending,” and hopefully we get just that. And if I don’t get a solid Halloween episode I will riot.

*Title of your sex tape.