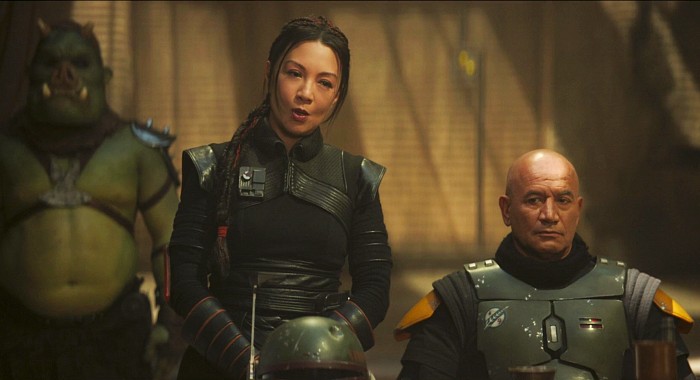 ‘The Book of Boba Fett’ Says Unionize, Comrades, As It Finally Fixes Its Story

Previously on The Book of Boba Fett: Wow, goddammit, where to start? OK, so you know the grand, sweeping epic story that the show was building about Boba Fett (Temuera Morrison) learning the ways of the Tusken Raiders and becoming a member of their tribe? Welp, they’re all dead. Straight-up killed off-screen and barely given a second thought as the episode jumps to the present where Boba Fett is getting wailed on by the Wookiee bounty hunter, Black Krrsantan, who somehow just waltzed right into Jabba’s Palace and into Boba’s room. After getting his ass saved by the Electric Scooter Gang and Fennec Shand (Ming-Na Wen), who is single-handedly carrying this whole operation, Boba plots a move against the Hutt twins on account of them throwing a Wookiee with electric knuckles right at his face.

However, this concern is surprisingly short-lived as the Hutt twins show up to Boba’s place, apologize, and give him a baby Rancor plus a free complimentary Danny Trejo who will also teach Boba how to ride his new gift. Whee…? With things settled with the Hutts, Boba lets Black Krrsantan go with some fatherly advice about not working for “scugholes” anymore because you’re only allowed to say “damn” and “hell” in Star Wars. No cussing in space, folks.

Anyway, all of this results in Boba and Fennec trying to find out what the Mayor knows about the Pyke Syndicate moving into town because, surprise, they’re the show’s Big Bad at the moment. (It changes with the wind.) Instead of learning any valuable information, there’s an embarrassingly awful space scooter chase that practically kills the show dead. I’m talking it’s a miracle that anyone tuned in this week. It was that bad.

So here’s the good news about The Book of Boba Fett Episode 4, “The Gathering Storm,” it had nowhere to go but up, and it did. After last week’s episode threw all of it storylines in a blender, the show surprisingly starts to lock into place and we’re finally given some explanations for why anything in the show is even happening.

Let’s hit the big one: Why did Boba Fett take out Bib Fortuna so he could assume control of Jabba’s operation? In this week’s flashback, it turns out the Nikto Sand Riders who killed Boba’s tribe of Tusken Raiders were working for Bib Fortuna. This revelation gets the ball rolling for Boba’s takeover as he tries to figure out a way to get his spaceship, Not Slave-1 (suck it, sad nerds), which is still sitting in Jabba’s Palace. Fortunately, the story drops a convenient answer right in Boba’s lap: Fennec Shand.

After stumbling across the aftermath of the gunfight from The Mandalorian Season 1 episode, “The Gunslinger,” Boba finds a wounded Fennec and carries her to a mod parlor where she’s given a brand new robot… stomach? Let’s go with stomach. In exchange for saving her life, Fennec agrees to help Boba recover Not Slave-1 (gimme those tasty tears) and his armor to settle her debt. 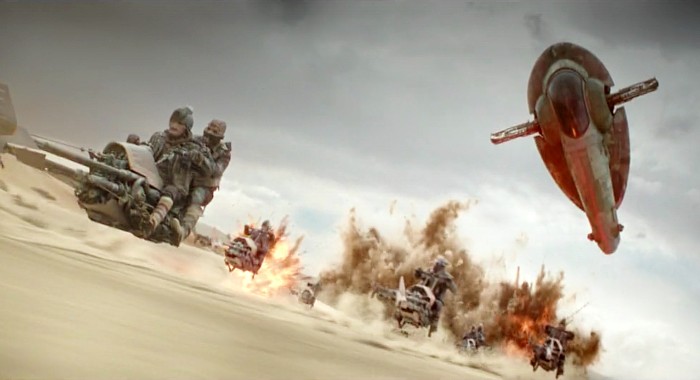 After some hijinks, the duo recover Not Slave-1 and proceed to embark on two very immediate revenge missions starting with completely mowing down the speeder bike gang like they’re flies. Boba Fett literally shoots a goddamn missile at one of them, so if you wanted to see him go all Punisher, there it was. After a healthy dose of murder, Boba and Fennec zip over to the Sarlacc Pit where Boba decides the smartest way to look for his armor is to hover Not Slave-1 directly over the thing’s mouth and stare into its guts. This proves to be a dumbass idea as the Sarlacc is very much alive and hungry for some spaceship. Naturally, Fennec, who did most of the work to free Not Slave-1, has to do everything and pulls their asses out of the frying pan by dropping a depth charge into the Sarlacc’s face.

As viewers of The Mandalorian know, Boba’s armor is not down there and, at this point in the story, is most likely gripping tightly to Timothy Olyphant’s handsome frame. Coming to terms that he’ll have to settle with just having Not Slave-1, Boba tells Fennec she’s free to go. However, she appears to be moved by an earlier conversation where he offered a chance to join him in becoming a crime lord that doesn’t send carelessly send bounty hunters on stupid missions where they’re killed just to settle petty debts. He even offers an equitable distribution of wealth because, folks, Boba Fett is all about that worker solidarity.

“But, Mike, aren’t you Pajiba’s resident neoliberal normie shill?” Probably! But on this one, I’m Team Petr all the way. Now, put the rich up against the wall unless they make movies, music, video games, and/or tweets that we like. To the Corbyn Copter, ya wee c*nts.

With Boba and Fennec’s partnership locked in — and built on a clearly solid foundation of her carrying his whole entire ass while he keeps chilling in his Bacta tank until his head gets really, really shiny, like super shiny — we jump back to the present where, for once, Boba does some crime lord shit where he actually knows what he’s doing. I almost fell out of my seat.

Knowing a war with the Pyke Syndicate is unavoidable, Boba stops by Jennifer Beal’s bar where he enlists Black Krrsantan into his bounty co-op, presumably with promises of seizing the space-means of space-production. With a new heavy aboard, Boba invites all the local crime bosses to dinner where he pulls a serious flex by hosting the meal on top of the pit for his new baby Rancor. Now that’s how you crime lord.

Obviously, none of the bosses want a fight with the Pykes to break out on the streets, so Boba makes it very easy for them. First, no one has to pay him shit anymore, and he doesn’t have to pay them. Second, he’ll take care of the Pykes. Third, all these clowns have to do is nothing. Just stay neutral and keep out of it. They seemingly accept his offer, but these are crime bosses we’re talking about, so who the hell knows?

Despite being a more competent crime lord in this episode, Boba has no clue for taking on the Pykes. Once again, enter Fennec who asks Boba how much cash he has on hand followed by The Mandalorian theme kicking in, so guess who’s coming to visit next week? More importantly, this dovetails into what I was saying in the very first recap about The Mandalorian eating Boba Fett’s lunch. But you know what? Let’s put a pin in that until we see what happens. Although, if I’m right, you will never hear the end of it. Never…

In the meantime, speaking of themes, again, Ludwig Göransson crushed another one out of the park. I cannot get The Book of Boba Fett theme out of my head, and I question the humanity of anyone who’s watching the show and not humming this bad boy in the shower and belting out the “hey hey” part as your wife and kids Google how soon senility kicks in. Until next week!