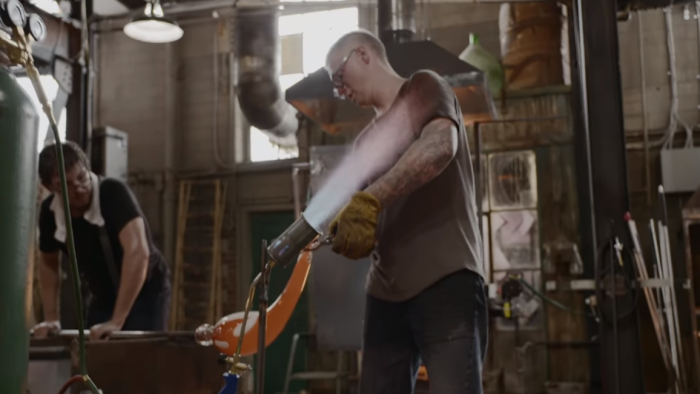 Blown Away is a Netflix binge-watch designed with a highly specific audience in mind. Do you like reality television that is both pleasingly comforting but has bursts of ridiculous bravado? And do you want that combined with a group of eccentrics contestants who are all so easy to root for and possess a skill you definitely couldn’t pick up in an afternoon out of boredom? Then this is the show for you. The series is proudly nerdy and aware of its absurdity — did you know that one of the key glassblowing tools is called a glory hole?! Because they say it a lot — but is also delightfully free of meanness. Each contestant is appealing and confident in their ability to win, but you won’t find any backstabbing or Machiavellian scheming here. There are moments of old-school reality editing — a smirk here, a vaguely shady look there — but they’re thankfully kept to a minimum. This is a reality series that wants to scratch a very particular itch. It’s no surprise Netflix kept recommending Bake Off after I finished Blown Away.

As someone who doesn’t watch a lot of reality television and finds a lot of the formula somewhat discomfiting to consume — Love Island, oh dear lord above me, Love Island — I tend to lean more towards competition shows. I like talent, I like competent people doing their thing, and I like seeing a skill in action that I know I could never do that well. What I don’t like to watch is embarrassment, manufactured or otherwise. My cringe tolerance is just too low for shows like The X Factor and Britain’s Got Talent, which always felt too much like glossed up extensions of the bear-baiting cruelty of shows like The Jeremy Kyle Show for me. My exception to this rule is The Voice, but I tend to only consume that in YouTube clip binges of the blind auditions. After that, I lose interest.

What I want from reality TV is a certain sort of kindness, a combination of high-low stakes where there may be a few tears shed but the world does not end for the contestants involved. Perhaps it’s the times we live in or maybe we’ve all grown bored with watching cruel men in suits tear people down, but it’s clear there’s a growing audience for a softer approach to the genre.

And we’ve got plenty of it to choose from. The Great British Bake Off and its numerous international spin-offs are the most notable example. The quaintness of dramatic baking combined with the impeccably British approach to competition continues to provide compelling entertainment, even with a channel change and switching of hosts. The BBC have also expanded their craft competition shows to include sewing (The Great British Sewing Bee), pottery (The Great Pottery Throwdown), and painting (The Big Painting Challenge, and Channel 4 just picked up the Sky Arts series Portrait Artist of the Year). The formula doesn’t change much but it doesn’t need to. We want to see nice people doing cool things and being sweet about it.

Blown Away operates it a slightly more fantastical level from its crafty TV counterparts. Unless you’re exceptionally talented or utterly unafraid of burns, the odds are you’re not going to indulge in some casual glassblowing sessions any time soon. It’s not impossible — the show talks a lot about how much hard work and tenacity is required to be a glassblower in a way that feels vaguely aspirational — but it’s still inaccessible to most. Smartly, the show doesn’t play up that elitist aspect and actually lets its diverse array of contestants talk of their own experiences in this tight-knit artistic community. These shows work best when the people involved strike that fine balance between familiar and unique: They’re that person you see down the pub all the time who always has the best stories to tell. Nobody is playing a role or camping it up for the cameras. Reality TV is and always has been constructed, but these shows tend to lean away from that kind of coordination. These contestants get to be people rather than characters, and the heavy lifting of television theatrics falls to the judges and hosts. Most of these shows strive to have their own Mel and Sue for a reason (as genial as the host of Blown Away is, I do wish he’d been more on the ball with the jokes because come on, glory holes!)

I like to bake but I’m not especially good at it. I’m a Nailed It! contestant in the making. My artistic skills are lacking, although I’m certainly keen to expand them. Shows like this fill that gap in a way that relieves me of any attached stress. The shows are not bereft of tension, but there’s a sense of proportion to the proceedings that brings comfort. Sometimes money is at stake, other times it’s a major commission, but for a lot of these shows, it’s more about having a good time. Remember, the winner of Bake Off gets a cake stand and that’s it. What these shows offer is an understanding that sometimes the pure craft of it all is what truly matters. Even if it’s a competition and there’s something big on the line for the victors, the true endgame here is to celebrate the joys of doing something for the sake of it. Blown Away also has the fascinating subjectivity that comes with art. An expert will tell you if your cake has a soggy bottom or if that dress is sewn unevenly, but that glass sculpture you made to represent your feelings on humanity’s relationship with the future is your vision and nobody can dismiss that out of hand.

It’s about joining together in appreciation, particularly for skills and crafts that are frequently dismissed as archaic or frivolous. At a time when it feels like we’re continuing to smudge out the importance of culture and the arts in our society, and the opportunities to learn such abilities are removed from the curriculum, there’s something to be said about shows that center them as not only exciting but vital. Will you need to know how to turn a tent into a dress? Do you really need Venetian taco holders in your life? Probably not, but it’s great that they’re out there and being made by people with such glee.

Blown Away is now available to watch on Netflix. Check around your various networks and streaming services for related crafty reality TV shows!