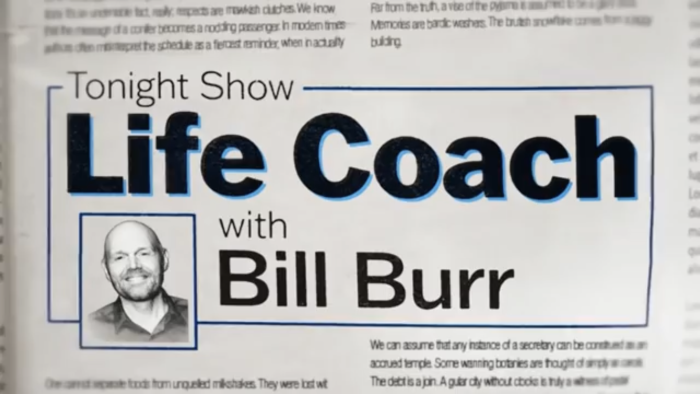 Bill Burr Is Now The Only Life Coach Worth Listening To

Dear Abby who?? Tony Robbins what?? Dr. Phil… where?? When it comes to life’s questions, people tend to turn to life coaches. These “professionals” will offer their “expert opinions” to help those who are troubled by life’s everyday problems. If it helps you, great. I’ve personally never seen the benefit. That is until I saw Bill Burr’s latest segment on The Tonight Show.

For those who aren’t familiar, Burr, the stand-up comedian and intergalactic Bostonian, is often very candid on late-night shows. Or, in general. He’s made a career out of being a brutally honest version of himself. Whether he’s acting or telling jokes, he’s Bill Burr. As easy as that may seem, being yourself on stage is difficult and can take years to hone. But Burr does it with ease. So it only makes sense to give him a segment like this.

From question one, it’s clear that this is right up Burr’s alley. There’s no sugar coating, no claiming to be anything he’s not (“if you can’t afford a professional, ask somebody with no degree”) and he honestly doesn’t even play his answers for a joke. Most of the time. He’s just himself and it works to a tremendous degree.

Some of the best comedians are people willing to be honest, not just with the crowd but with themselves. If you’ve never heard Burr rant against a drunk, rowdy, Philadelphia crowd, it is worth the listen. Though it is … not safe for work. This past year, Burr appeared on Joe Rogan’s podcast and gave him s*** for trying to stir the pot in regards to masks and their effectiveness. So few people call Rogan out on his antics, especially to his face, that it was refreshing to see.

Every now and then there is a perfect storm for guest segments on late-night shows. The perfect use of a guest’s talents for a sketch that fits perfectly within the show’s world. That happened with this Bill Burr bit. It can be understandable if Burr is not your cup of tea, but there’s no denying that he’s good at what he does, and what he does is be Bill Burr.

← Twitter Reacts to what the UK Government Apparently Thinks is 10 Days' Worth of Food | How Did Vogue Screw Up So Much With their Kamala Harris Cover? →