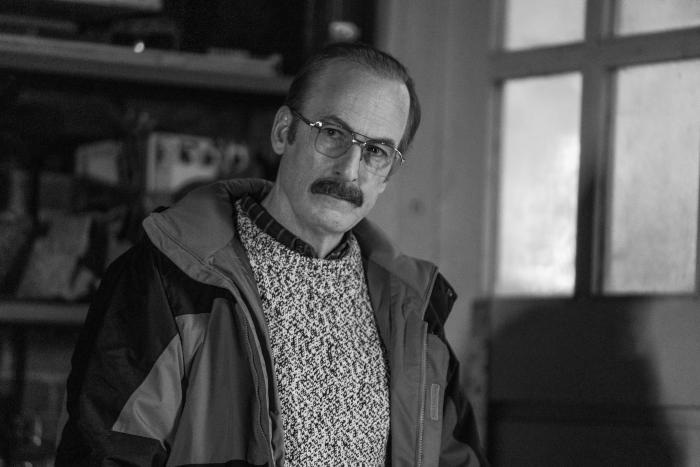 At long last, we’ve finally gotten an answer to the question we’ve been asking ourselves since the premiere of season five: what happened to Gene after he turned down the Disappearer, Ed Galbraith (Robert Forster in one of his final performances)? When last we left Gene, he had been identified as Saul by a cab driver named Jeff (Pat Healy, stepping in for Don Harvey due to scheduling issues), who went so far as to track Gene down at the mall in order to pry the truth from him. The incident spooked him enough to make yet another call for an adapter for a Hoover MaxExtract Pressure-Pro Model 60, but before a deal could be struck, Gene had an abrupt change of heart, declaring, “I’m gonna fix it myself.”

This week we finally learned what exactly that “fix” would entail, and it should have come as no surprise that it would come in the form of a con. From the moment Gene staples a missing dog sign to a tree, it’s clear that the game is afoot, though there is no way of knowing just how elaborate it would be. His effort to charm the grouchy Marion (a delightful guest appearance by television legend Carol Burnett) is only the first of many steps towards his plan, which is pulling a heist at the shopping mall he works at. Though Gene loves a con, it pales in comparison to the smug satisfaction he gets over watching Jeff, who turns out to be Marion’s son, squirm in discomfort at watching the man formerly known as Saul Goodman be gushed over by his otherwise ill-tempered mother (“I know it’s awkward, right? But you don’t have to call me ‘Dad.’ Yet.”). Looks like Gene still has that senior citizen razzle dazzle working for him.

Although the overall plan formulates rather quickly in his mind, Gene taps back into his previous self in stages, beginning first with donning Marco’s old ring. It operates as a totem of sorts, especially when he’s gripped with doubt outside the mall security office, the setting of the second phase of his plan. Things almost go awry when he’s greeted by angry security guard Nick (Nathaniel Augustson), who remembers him as the man who yelled, “get a lawyer,” at the shoplifting kid (the incident that preceded his fainting spell) back in season three, but is quickly saved by the tantalizing aroma of cinnamon rolls reaching his coworker, Frank (Jim O’Heir, best known for playing Jerry Gergich on Parks & Recreation). Watching Frank cheerfully devour the treat isn’t simply a matter of ingratiating himself to the man who keeps his eye on the security monitors—or torturing viewers with a fondness for Cinnabon—but a repetitive exercise to determine approximately how long Frank keeps his back to those screens.

Many cinnamon rolls later, it all comes down to three minutes. Three minutes to run through a department store grabbing a select assortment of merchandise predetermined by Gene, who thoroughly cased the place well in advance. Largely ignored by the store associates who easily write him off with one look at the Cinnabon logo on his shirt, he observes the store layout, which he painstakingly recreates in the middle of a snow-covered field. Jeff’s better sense nearly prevails when he starts to balk at the risk, but it only takes the possibility of his friend cashing in without him to get him back in the game. Good thing since it’s a three man job, and Jeff’s friend is needed as delivery truck driver “Ricky,” who’s tasked with delivering the crate that hides Jeff within it like a felonious Trojan.

Longtime Breaking Bad and Better Call Saul fans were probably quick to guess that a mere floor scuff could possibly portend doom for Gene’s well-thought out plan. Things are going swimmingly, with Jeff racing from one display to another before that seemingly innocuous setup pays off, resulting in him wiping out on that freshly polished floor hard enough to knock him out cold. Of course, this happens just as Frank takes the last bite of his cinnamon roll. Time’s up. Gene, who’s been able to view the heist over the monitors, is forced to take desperate measures to keep Frank from turning around, though goodness knows it’s not the first time he’s used tears to manipulate people. Like the best cons, it succeeds because it holds a kernel of truth within it. When Gene talks about his empty life, observing, “If I died tonight, no one would care,” he’s being entirely truthful. He manages to keep up the act—his ability to compartmentalize allows him to repack those vulnerable feelings back into his mental storage closet—just long enough for Jeff to finally regain consciousness, put the stolen goods into the crate and seek shelter in the men’s room until the following morning.

Later that afternoon the two men gloat over their haul while Gene looks on. Only then does the other shoe drop, revealing Gene’s true intentions, namely that of “mutually assured destruction”; by tying Jeff and his friend directly to a crime major enough to ensure a very long prison stint, Gene shields himself from the possibility of Jeff selling him, or Saul Goodman, rather, to the authorities. “You’re a good influence,” Marion tells Gene, a sentiment that could be true in its own crooked way should her Jeffie be able to stay away from trouble. However, Jeff strikes me as the sort of petty man who won’t take kindly to being fooled, and I suspect this won’t be the last we’ll see of him.

This week provides a much needed breather after the almost non-stop intensity of the last few episodes. With last week’s heartbreaking episode revealing Saul Goodman’s final form, it’s perfectly logical to pick the story off at the biggest dangling thread, which means looking in on Gene Takovic. There may be temptation to write this episode off as mere filler, but one would have to ignore the fact that the stakes were almost just as high as many of his previous cons, i.e. neutralizing a potential threat, as well as marking the potential reemergence of Saul, judging by the way Gene looked at that loud shirt and tie. Next week will likely see a return to the past, since it’s reported (via The A/V Club) that episode eleven is, fittingly, titled, “Breaking Bad.”

Despite the brouhaha over a certain pair of highly anticipated guest stars, I believe we’ll be spending the final episodes seeing how far Gene allows himself to indulge in his true nature. “So after all that, a happy ending,” he tells Marion after she inquires about the nonexistent Nippy. If Gene opts to reclaim a measure of the life he fled from, the possibility of that happy ending ever occurring is about as real as that imaginary dog.

Kaleena Rivera is the TV Editor for Pajiba. When she isn’t wondering why Jeff didn’t save time by waiting to cut all the security tags off later (there’s no electronic theft detection in loading docks), she can be found on Twitter here.