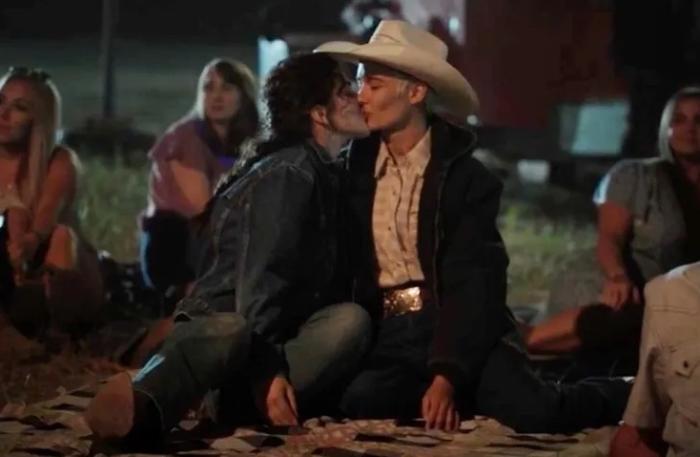 It took me longer than usual to watch Yellowstone this week, which meant that I saw a number of headlines about the series featuring its first lesbian kiss. It was two seconds practically in the background of a scene, a moment that could have been caught in a GIF. If I didn’t know it was going to happen, I may have missed it entirely. However, many of the conservatives that make up the fanbase for Yellowstone did not miss it, and despite the fact that 70 percent of the country is down with gay marriage, there are still pockets of bigotry. Take, for instance, the worst person in the world, former baseball player and virulent homophobe, Aubrey Huff, who says in his Twitter bio that he believes in “guns, whiskey, and toxic masculinity.”

Even Yellowstone has gone woke, and gay!

I’d like to say that Huff is an outlier, but many of the series’ fans have certain expectations about the politics of the show based on the setting and the profession of its characters. Their beliefs are so extreme that they think even Liz Cheney is “woke.”

Don’t forget that Kevin Costner is part of the woke crowd. He was heavily backing Lizzy Chaney in her re-election campaign.

Were it not for the kiss, there’d probably be little else to say about the week’s episode, save for the fact that Jamie Dutton is finally making a move on his father, John Dutton. Jamie has spent the season f**king Sarah Atwood, who has manipulated him into making a move to impeach John so that Jamie can run for the governor’s seat so that Jamie can put the airport project back into motion. Meanwhile, because of other concerns, John has to relocate his cattle to Texas for about a year, and the ranchers who will have to spend that year living in teepees are ecstatic about it. Relocating will cost the ranch more than it makes, so Beth is planning to change the family business from raising and selling cattle to selling beef online, a far more lucrative business plan for the ranch. Also, Summer, the hippy environmentalist played by Piper Perabo, finally understands the appeal of the ranch, although she may have forgotten that “factory farmers use 2,500 gallons of water and a gallon of gasoline, and destroy 35 pounds of topsoil” to produce one pound of steak.