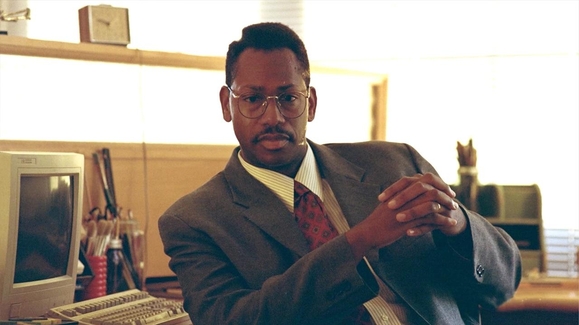 'Atlanta' Recap: How Disney Made The Blackest Movie Of All Time

Previously on Atlanta: Earn, Van, and Lottie spend the weekend together at a campground in the woods to celebrate Lottie’s sixth birthday. The trip also results in Earn and Van deciding whether or not Van will come to Los Angeles with Earn so he can continue pursuing his career as a talent manager, and also confronting how the two of them truly feel about each other, and if there is any future for them as a couple.

THE STORY SO FAR: B.A.N. (the same network that airs Montague, the talk show where Paper Boi was interviewed about his alleged transphobia) is airing a documentary about the making of the classic animated film A Goofy Movie, and how one Black animator named Thomas Washington not only became the CEO of Walt Disney Pictures, but was responsible for the film’s development. Only for his obsession with the film to tear his family apart and deeply affect his own mental health.

WHAT’S GOOD ABOUT THIS EPISODE?: Thomas Washington’s mother and cousin being interviewed about his childhood obsession with drawing, and how sensitive he was when being teased by other Black kids for acting too white and not being cool enough. Thomas becoming obsessed with Goofy when Art Babbitt, Goofy’s creator, comes to his school and holds a lecture about the character, which leads to Thomas being convinced that Goofy is actually Black. Thomas’ short film, The Little Prince, which gets him hired by Disney. Thomas getting voted into the position of Disney CEO completely by accident, simply because his name was similar to a white Disney employee named Thompson Washington. Thomas deciding to use his position as CEO to make “the Blackest movie of all time,” and one that covered the important topics like segregation, single parenting, fear of incarceration, and Black people using too much cheese in their food. The animator meeting held by Thomas, and how he praises one of his animators for attending a Black cookout for research purporses, even though it ended with him getting his ass whooped for saying the wrong thing to somebody. The white animators complaining and being confused about the gestures Thomas wants to see drawn, and the references he makes about them to other Black people in actual conversation.

Brian McKnight being the one who suggested to Thomas that he should start listening to the one and only Tevin Campbell. Thomas’ ex-wife and son talking about how their relationships with him deteriorated as he became bitter, abusive, and reliant on alcohol (which unfortunately reminded me of Brad Pitt’s behavior towards his family). The story of how Thomas referred to himself as Goofy when asked about A Goofy Movie’s budget, and then laughed just like Goofy. The original ending of A Goofy Movie, where Thomas wanted Goofy and Max pulled over by the cops and shot, and/or Goofy getting shot to death at the Powerline concert. The final video footage of Thomas, where it’s clear that his mental and emotional well-being isn’t great, and he is determined to make his son and the Black community proud with his work on A Goofy Movie. Thomas’ corpse being found in the same lake that he used to fish at with his son, and found with one large Goofy glove and two large Goofy shoes. (Yes, really!)

ARE PAPER BOI AND/OR DARIUS IN THIS EPISODE?: No, and neither are Earn or Van.

ANY CAMEOS FROM THE CAST OF COMMUNITY?: No, but we do get cameos from Brian McKnight (who is best known for his classic R&B song where he offers to show women how their *insert cat sound here* works), and Sinbad (from A Different World and that other movie named Shazam! where he plays a genie and how it doesn’t actually exist, but we all somehow became convinced that it really does exist)

HOW MANY F-BOMBS WERE THERE IN THIS EPISODE?: One or two.

ON A SCALE OF 1 TO “WHAT THE HELL DID I JUST WATCH?,” HOW WEIRD AND TERRIFYING WAS THIS EPISODE?: It’s a whole-ass mockumentary about the making of A Goofy Movie. It’s an 11 on the weirdness scale.

ANY TIME-TRAVELING ALIENS IN THIS EPISODE?: Do you really need time-traveling aliens in an Atlanta episode about the making of A Goofy Movie, Dustin? I mean, really?

TO SUM IT ALL UP: After almost four seasons, I know better than to underestimate Donald Glover and company by acting as if they can’t surprise me with what happens in any given episode. And this episode here is completely unpredictable in the story they choose to tell and how they choose to tell it. To touch upon the importance and value of A Goofy Movie to the Black community, and do an entire episode about it when or show has only three episodes left is most definitely an impressive feat.

It nailed what the 1990s felt like for the Black community when dealing with the Los Angeles riots, and how the amount of Black entertainment had us all in a chokehold during most of that decade. Hearing how Thomas was described by his family and his colleagues in terms of what he wanted to see in A Goofy Movie, and how he refused to have his Blackness questioned or belittled by anyone, was somewhat reminiscent of Spike Lee and his struggle to make Malcolm X, how he was questioned by the studio, how he was using this film to have something to say about the issues affecting Black people, and how he made his bosses very nervous. As funny as all of this was (especially the part were Harrison Ford’s name was randomly dropped among the Black celebs hanging out with Thomas in his office), it clearly had something to say about mental health and Black pride.

As Brian McKnight said, mental health was not an issue that was discussed back in the ’90s, especially not when it came to Black folk. To see and hear about what Thomas was wrestling with, even when he was a little boy, is a bit rough, and it becomes clear that as much as Thomas was a talented genius, Goofy as a character became his life preserver that helped keep him afloat while drifting and trying to figure out what to do. And unfortunately, no matter how he died, it still wasn’t enough to help him keep his head above water.

All that being said, if all “The Goof Who Sat By The Door” (whose episode title is inspired by the novel The Spook Who Sat By The Door, as well as its film adaptation of the same name) gave us was the snapshot of Thomas doing the jailhouse pose on top of the conference room table while throwing the Peace sign, and doing this with all of the whiteboard members glaring at him from behind, I’d still consider this episode a classic. Which it is. It’s the Atlanta version of “When Keeping It Real Goes Wrong.”

Even Kevin Lima, the actual director of A Goofy Movie, was amazed by the episode, and by what it had to say about the film.

I am jaw-dropped honored that #atlantafx and whoever was involved behind the scenes, that includes you @donaldglover, would hold #AGoofyMovie in such esteem. Humbled.#goofy #animation #Disney #fx pic.twitter.com/p6bqut4eDX

FYI: Someone on Twitter was kind and observant enough to point this out.

just so we're clear: atlanta is a masterpiece.


And by “Eye To Eye” by Powerline:

← What are the Best 'Cabinet Of Curiosities' Episodes on Netflix? | Janelle Monae Won Halloween This Year →