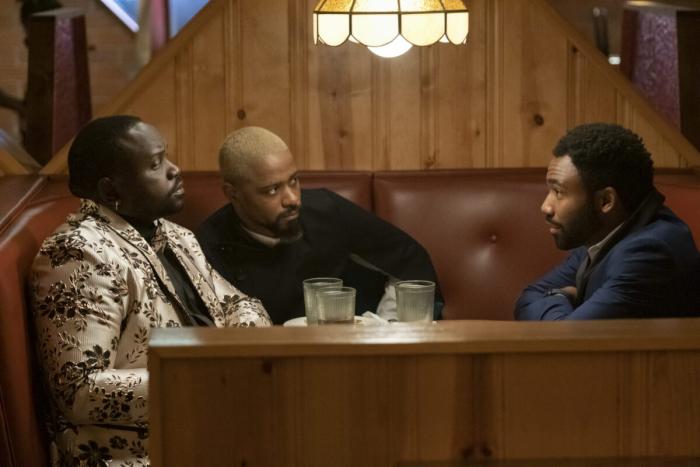 'Atlanta' Recap: I Believe The White Children Are Our Future

Previously on Atlanta: In order to improve his physical health, Earn has begun attending therapy sessions, where he opens up more about himself and about his past. An aspiring author named Lisa is approached about having the manuscript for her children’s book published and begins preparing for her life to change as a result, only to realize that her life is about to change for the worse and not for the better.

THE STORY SO FAR: Paper Boi is paid a cool million to spend time with a teenage boy and aspiring rapper, and show him the ropes to how to be successful, only to end up getting some very unexpected career advice. Earn attempts to sign R&B singer D’Angelo as a client, and things end up taking a very weird turn. (Considering this is Atlanta I’m talking about, that’s saying a lot.)

WHAT’S GOOD ABOUT THIS EPISODE?: The utter annoyance conveyed by Paper Boi when approached by the wealthy Jewish man at the bar mitzvah and his ridiculously condescending statements, and how he becomes even more annoyed when that man offers him one million dollars to spend time with his son. (Seriously, no one is better at expressing contempt and annoyance than Brian Tyree Henry). Earn becoming increasingly irritated at a company meeting when his boss and colleagues express their interest in rehabilitating the image of a racist white woman who drew a handgun on a Black teenage boy who was selling snacks for charity. (I especially liked how the footage of this encounter is seen airing on What Now?, which is clearly the Atlanta version of Now This news). Paper Boi walking into the recording studio and meeting Benny and Yodel Kid, who barely know or care who he is, and then connecting with another rapper named Bunk, who tells him to attend a meeting with other rappers where they are told that if they want to remain rich and successful, they need to get themselves a Y.W.A., a Young White Avatar. Basically, they need to collaborate with or manage young white artists like Benny and Yodel Kid if they want to stay on top and keep living the expensive and extravagant lifestyles they’re accustomed to. Paper Boi approaching Benny and attempting to become his manager, only to discover that Bunk already beat him to it, before finally settling on Yodel Kid.

Earn looking shocked upon learning that D’Angelo can be found at an actual Rally’s in Georgia, which is like me learning that there is a Publix in New York (please know that I would happily Spartan-kick Dustin into the nearest bottomless pit if it meant that it would result in Publix bring their wings and their subs and their baked goods to New York City. Sorry, Dustin, but if you’ve had food from Publix, you’ll understand (Publisher’s Note: Understood)), and entering through a bathroom door with D’Angelo’s name literally on it, only to be told by a lone security guard reading back issues of Jet that he needs to stay in this desolate room and wait … and wait … and wait. And when a whole week goes by, and the only nourishment that Earn is provided are bottles of Dasani water (which as we all know, is the worst f-cking bottled water in all of existence and tastes like the T-1000 from Terminator 2 came inside of every single bottle), Earn demands that the security guard take him to see D’Angelo.

Unfortunately for Earn, the person he then sees is just … a husky Black man who is clearly not D’Angelo, but some dude who eats peanut butter and fried chicken skin sandwiches, who has a singing voice that’s kinda-maybe-sorta similar to D’Angelo’s, and who insists that we are all D’Angelo, and that he is not just one person, but an essence that is felt through millions of people. (Serves me right for thinking even for a second that D’Angelo would actually be in this episode.) Paper Boi’s collaboration with Yodel Kid actually being a success, and even getting the two of them a Grammy nomination … which Yodel Kid is unable to collect at the awards show with Paper Boi, as Benny tells him that Yodel Kid died of a drug overdose just hours before the Grammys, leaving Paper Boi in need of another Y.W.A.

WHAT’S NOT SO GOOD ABOUT THIS EPISODE?: The fact that this is another episode that doesn’t feature Vanessa. Hell, Darius has more screen time, and he doesn’t even show up until the very end of the episode.

ANY CAMEOS FROM THE CAST OF SOLO: A STAR WARS STORY?: None.

ON A SCALE OF 1 TO “WHAT THE HELL DID I JUST WATCH?” HOW WEIRD AND TERRIFYING WAS THIS EPISODE?: Six, if only to see Earn go through yet another strange and mysterious entryway with unbelievable results. Only instead of leading him to Blueblood’s funeral, he’s led to what looks like a basement apartment where “D’Angelo” plays video games and eats the kind of sandwiches that would make Bruh-Man from the Fif’ Flo’ jealous.

ANY TIME-TRAVELING ALIENS IN THIS EPISODE?: No aliens in this episode, but La Brea is coming back this week, which will bring you so much nonexistent joy and provide you with all of the inexplicable weirdness you want when watching your stories.

TO SUM IT ALL UP: As funny and weird as this episode of Atlanta was, it also had a point to make about artists and their struggle to remain relevant to their audience, while also dealing with what happens when the world cares less about your relevancy and more about draining you completely dry until there’s nothing left. When that happens, or when it comes close to happening, what is an artist willing to do to make sure they avoid that particular fate? D’Angelo has said in several interviews how overwhelmed he was by the success of his first two albums, particularly Voodoo, which not only gave us “Untitled (How Does It Feel)” but the classic music video that accompanied it and had millions of female fans spraying themselves with cold water like Blanche Devereaux. That success, the thought of him being seen as purely a sex symbol and not as an artist with talent and substance, and the ever-increasing demand from his fanbase for new music is what caused him to withdraw and take several steps back, and not release anything new for fans to enjoy until 2014, fourteen years after the release of Voodoo.

We see Paper Boi having that same struggle himself when it comes to his own career as a musician. Not just wrestling with what his future holds after seeing what happened to Blueblood, but even going back to last season when he was feeling as if he lost his creativity and would never be able to craft any new lyrics again. Hearing Earn’s response when asked how he’s able to succeed as a manager in the music game (“I just remember it’s not what about what feels good. It’s about what survives”) hammers home for Paper Boi that quality alone and being hot in these streets won’t be enough to guarantee that his life and career will always be good. Even if it means having to work with young, inexperienced, and marginally talented white artists just to stay in the spotlight and remind fans of his career and his very existence. (Much like how white artists will recruit Black artists to either produce their albums or perform on songs for their albums so that younger fans will pay more attention to them).

All he can do right now is try to figure out what’s next, and whether he’ll choose to do something that feels good or something that will simply survive. Considering that Earn works for a management company that cares more about making white people look good to the world even when they don’t deserve it than they do about signing clients with talent who need opportunity for success instead of rehabilitation that will get them out of Cancel Club, it’s a struggle that he’s clearly all too familiar with.

This episode of Atlanta has been brought to you by “California Gurls” by Katy Perry and Snoop Dogg:


“Forgot About Dre” by Dr. Dre and Eminem:


And “Rule The World” by 2 Chains and Ariana Grande:


← The 'Manifest' Final Season Trailer Illustrates the Power of the Sunk-Cost Fallacy | Review: 'The Greatest Beer Run Ever' on Apple TV+ Is Bad →