In 2002, the fast-paced British spy series Spooks (known in the United States as MI:5) debuted, and something incredible happened in the second episode of the show. It violently killed off a character played by a well-known British actress named Lisa Faulker (and by violent, I mean, they dunked her head in a deep fryer). It was a big deal at the time because killing off a known star in the second episode of a series was almost unheard of and it provoked a number of complaints from shocked BBC viewers.

Nearly ten years later, once I recovered from the shock of Game of Thrones killing off Ned Stark in its ninth episode, my next thought was, “MI:5 did it better.” The Anyone Can Die trope is so frequently used now in British cop/spy series (pity the actor who plays Idris Elba’s partner in Luther) that it’s almost more surprising now when it doesn’t happen.

Another running theme I’ve noticed in British spy/cop series, in strong contrast to most American spy/cop series, is that MI:5, Scotland Yard, Parliament, or a combination of the three are almost always the Big Bad, involved in some grand conspiracy that usually involves a major cover-up. As an American used to seeing bad guys played by Russians or the Chinese government, this is always surprising to me, particularly since the publicly-funded BBC is behind so many of these series.

Apple TV+’s Slow Horses, which is based on a series from British mystery author Mick Herron, is set in London, features an all British cast, and doesn’t stray too far from the British spy series formula. The first three episodes lay out exactly what I would expect (spoilers): A conspiracy involving the British government and the potential death of a major character. If you are at all familiar with British spy series, those spoilers are not actually spoilers. Both came as almost a relief because, with those two tropes out of the way, I could focus on the rest of the plot and what still works about Slow Horses. The answer? Almost everything else.

“Slow Horses” refers to MI:5 agents who have f**ked up something so badly that they’ve been exiled to Slough House, an administrative purgatory run by Jackson Lamb (Gary Oldman), a slovenly out-of-shape over-the-hill alcoholic who farts with some frequency — not for comedic effect, but because he’s a gross old dude. Obviously, he’s also a brilliant but reluctant mentor to a bunch of rejects, one of whom is River Cartwright (Jack Lowden), exiled after badly botching a training exercise (he’s only spared from being terminated because his father was a big deal retired MI:5 agent). 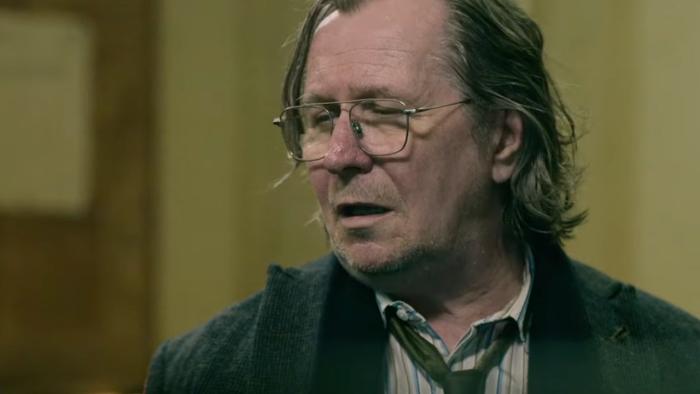 While working in Slough House, Cartwright stumbles upon an actual case involving notes discovered on a journalist’s laptop that seem connected to the abduction of a Pakistani by a white nationalist group. It is not, however, exactly as it seems, and I’ll refer you again to the British manual on espionage series (although, I found the conspiracy at the center of this story a particularly clever one). Obviously, the band of misfits at Slough House will not only get involved but attempts to scapegoat them will be made.

In addition to Lamb and Cartwright, the agents include Sid Baker (Olivia Cooke), who appears to be too good to work in Slough House; the requisite techie (Christopher Chung); and a couple of washed-out agents who may have a thing for one another (Rosalind Eleazar and Dustin Demri-Burns). Kristen Scott Thomas, meanwhile, plays the icy second-in-command of MI:5, and her allegiances are uncertain, as one might expect.

While Slow Horses shares a lot in common with other British spy series (shocking turns, government conspiracy, dark lighting), it does have something else going for it: A sense of humor. I wouldn’t call it light, but there are a few moments of levity and some playful interactions between the characters. It’s also fun to see Oldman play a flatulent coot working a case against his will because he had otherwise resigned himself to the tedious administrative functions of a bureaucracy. Cartwright is likewise a delight as a legacy whiz-kid experiencing his first taste of defeat and trying to rise above it.

Slow Horses takes a beat to kick into motion, but once it does, it is tense, suspenseful, and occasionally fun, even as it falls back on the tropes of British espionage thrillers. It is also a refreshingly short, six-episode series, although an additional six episodes have already been ordered based on Mick Herron’s follow-up to Slow Horses, Dead Lions.