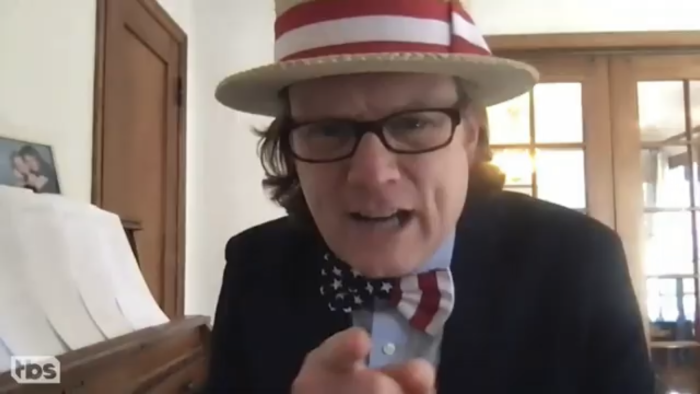 Andy Daly Should Just Be On Every Episode Of ‘Conan‘, Thanks

Andy Daly is one of the funniest people working today. That’s a FACT. An expert improviser, master of funny voices, incredibly talented actor, and one of the best first names possible. Whenever Andy shows up on Conan’s show, be it on TV or on Conan’s podcast, I just sit back and prepare to laugh. I honestly believe he should be on the show every day. I mean, check out Andy’s appearance from last night as political parody songwriter Tip Rivers.

That segment was, dare I say, gut-busting. Daly is seemingly effortless when playing characters like this. There’s an undeniable silliness that is perfectly blended with a real sense of believability. I know Tip Rivers isn’t a “real” person but, dammit, he sure feels like one! It’s not simply a caricature and not all comedic actors can toe that line as well as Daly.

So, why not have him on Conan everyday? To argue against my own suggestion, it could be difficult to work in a segment for him in every episode, from both a writing standpoint and a logistical standpoint. Andy works a lot (which is great) so he may not have time. Plus, that would make it two Andys on the show (Richter and Daly) and while I, a fellow member of the Andrew Monolith, would be fine with that, it may be confusing for non-Andrews.

There is a workaround to anything standing in the way of Andy appearances. Conan announced that his next step after ending his talk show will be to host a variety show on HBO Max. WELL, I am here to suggest, nay, demand that Andy Daly be a featured performer/cast member on that show. I don’t even need credit for this brilliant suggestion. A signed headshot of both Andys for my Wall of Andrews will suffice.

All hail the Andrew Monolith!