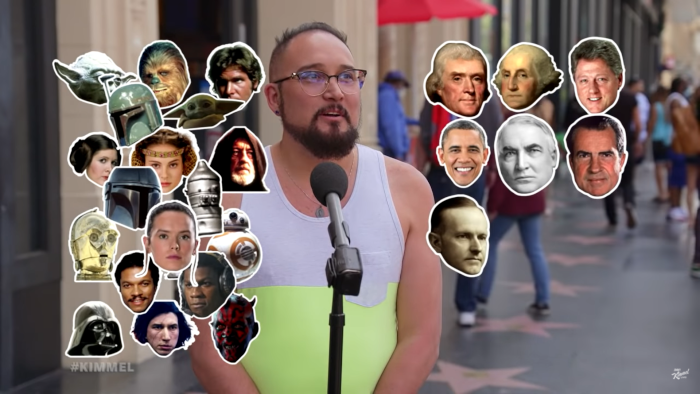 Americans On 'Kimmel' Prove They Know More About 'Star Wars' Than U.S. History

This one stings. I have a lot of interests. Until the last six/seven years, those interests were considered punishably nerdy. I grew up in a time when you had to hide that you were reading a comic book lest you face ridicule. Luckily, times have changed, and “nerd” stuff is more commonly accepted. I can remember the name of Gary Oldman’s villain from the 1997 film The Fifth Element (it’s Jean-Baptiste Emanuel Zorg, and no I did not look that up) without fear of reprisal. However, it does raise another fear: that my brain is full of useless information.

I’m not attempting to get on any kind of high horse here. I would have faired better on this particular subject, but I could have easily fallen into a similar trap. If the questions had been about tax prep I would have been screwed. Math tends to turn me into a blubbering mess. I think the lesson here can be found in something I heard comic book scribe Mark Waid say at a comic con about a decade ago. He pleaded with the audience, who were there for tips on comic book writing, to read things that weren’t comic books.

He wanted people to be well-rounded. I think a lot of people could benefit from similar advice.


← Bullet Points: An Instructive 'House of Dragons' Trailer, and 'Saved by the Bell' Dings No More | Amy Is Autumn on 'Outer Range,' Right? →