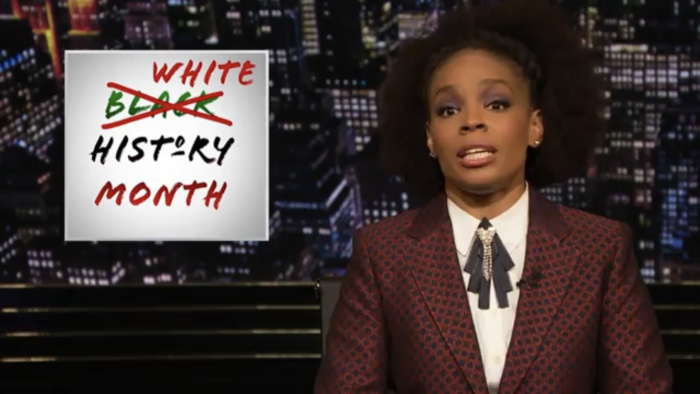 Amber Ruffin Made An Excellent Case For White History Month

It’s Black History Month! A time for learning about Black history and celebrating Black voices and lives. Unfortunately, there can be pushback against the month, with some wishing for a “White History Month”. Luckily, Amber Ruffin thought of a way to actually make that sound appealing!

In a segment on her show titled How Did We Get Here?, Amber made things pretty simple. If people want a “White History Month,” let’s use that opportunity to teach the more unflattering aspects of white history. She touches on everything from the Second Amendment to the creation of the Ku Klux Klan.

The whole segment is, in a way, bittersweet. Amber makes some excellent points and still manages to keep things funny while discussing depressing subject matter. However, the fact still remains that things she talks about are not taught in schools regularly. Unsavory aspects of America’s past are often left covered up or in some cases, outright ignored.

Maybe, someday, we can be honest with ourselves as a nation, on a grand scale. Until then, we’ll just have to get our facts from a comedy show. At least it’s a good one!